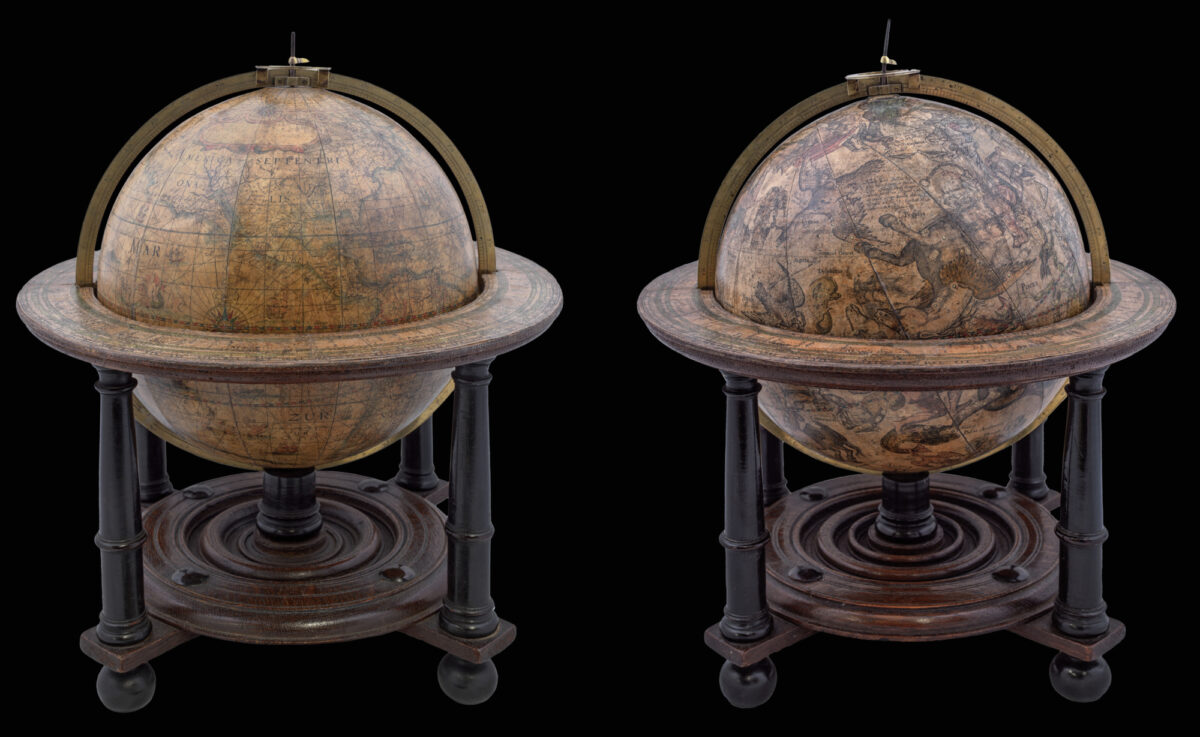 “Amongst the rarest to survive”

Biography
Willem Janszoon Blaeu (1571–1638) started ​“one of the most successful publishing houses of the seventeenth century” (Dekker). Originally trained in astronomy, he quickly became a leading maker of maps, atlases and instruments. At the time the Low Countries hosted the best cartographers in Europe, and Blaeu produced ever more accurate and more beautiful globes, spurred by his rivalry with fellow Dutch cartographer and publisher Jodocus Hondius.

Blaeu’s globes were luxury items for wealthy and intellectual merchants and nobility who benefited from Blaeu’s access through the Dutch East India Company to the latest navigational discoveries and geographical information. As van der Krogt observes, ​“During the preceding century, more than half of the known world, including the entire western hemisphere, had been charted and, more recently, during Blaeu’s own time, large portions of the Pacific were being explored”. Dutch explorers had played a key role in the expanding European worldview: from Olivier van der Noort’s circumnavigation of the earth, to Willem Barentsz’s attempts to find the Northeast Passage. Blaeu also had the advantage of considerable personal technical skill: he studied under the astronomer Tycho Brahe to create a star catalogue for his first celestial globe.

Even at the time, Blaeu’s globes were an expensive purchase: the terrestrial globe cost 16 guilders and the celestial globe cost nine guilders. However, it was also the most advanced cartographic document of the age: it was a monument and tool, to be used as much as admired.

Blaeu’s pair of nine-inch table globes are amongst the rarest to survive in comparison with the smaller or larger globes by Blaeu (four, six, 13.5, and 26 inches).

Geography
Willem Jansz Blaeu collected information that Dutch mariners gathered from around world and brought back to Amsterdam. Crews were instructed to record information about the lands they visited and the skies they saw. Blaeu incorporated these observations in maps and globes. Through his web of contacts and thanks to assiduous research, he was also able to obtain the most recent information about the latest discoveries in the western hemisphere and the South Pacific, where Dutch explorers were particularly active at the time.

Since the globe was published after 1618, Blaeu was able to include the discoveries made by Henry Hudson in his attempt to find a passage to the East Indies. He also included recent Pacific discoveries of the celebrated voyages of Willem Cornelis Schouten and Jacob Le Maire, who both traversed the South Pacific and the Atlantic. The findings of Schouten and Le Maire in the Tierra del Fuego region are also incorporated.

The Strait of Le Maire is drawn and the hypothetical southern continent is labelled ​“Terra Australis Incognita Magalanica”. Olivier van Noort’s track is drawn and labelled. His route is indicated with a broken line and the words: ​“Navigationis Olivierij ductus” (several times). There are various decorative features, such as animals on the different continents, many ships on the high seas and allegorical and mythical figures around the cartouches.

The nine-inch globe is not just a smaller version of the one published in 1599. Drawings of animals and people do often correspond to those on the earlier globe, but Blaeu made several significant changes.
- The west coast of North America is drawn differently and the river system of Brazil is altered.
- The hypothetical southern continent is labelled: Terra Australis Incognita Magallanica.
- There are nine ocean names in handsome curling letters: Mare Congelatum, Mare Atlanticum, Oceanus Aethiopicus, Mare Arabicum et Indicum, Mare di India, Oceanus Chinensis, Mar del Zur, Mare Pacificum, Mar del Nort.
- Willem Blaeu, always eager to display the latest discoveries, traced the route of Van Noort’s route with a broken line. The findings of the voyage of Schouten and Le Maire in the Tierro del Fuego region are included, despite the 1602 date (names: Fr. Le Maire, Mauritius, Staten Landt, C.Hoorn, I.Barneveltij).

Astronomy
The first maker of globes from the northern Netherlands was the cartographer Jacob Floris van Langren (before 1525–1610). He published his first terrestrial and celestial globes in 1586 with a diameter of 325mm, the terrestrial globes being based on the work of Mercator. The second edition of the celestial globe was improved after the observations of the southern hemisphere by Pieter Dirkz Keyser and Frederik de Houtman were incorporated by the geographer Petrus Plancius (1552- 1622), who was also influential as a globe maker.

Two other famous Dutch mapmakers produced celestial globes: Jodocus Hondius the Elder (1563–1612), one of the most notable engravers of his day, and Willem Jansz Blaeu (1571–1638).

Publication history
According to Peter van der Krogt, the following states are known:

Terrestrial
First state: 1602 (no known examples).
Second state, c1618-1621 (no known examples).
Third state: 1602, but c1621 (the present example).
All the states are dated 1602 but the second state must have been published after 1618, since it includes the discoveries of Schouten and Le Maire (1615–1617), but not the name ​“Blaeu”.
Elly Dekker makes no distinction between the different states. The third state can be divided into states 3a and 3b. All globes have a different production number, some of which are illegible today. This terrestrial nine-inch globe is marked with ​“fabr. nr. 4”.

Celestial
First state: 1602 (known in a catalogue record but no known example surviving).
Second state: presumably published after 1621.
All 30 known celestial globes are in the second state, as this one, which is marked with ​“fabr. no. 12”.

Rare: there are 19 recorded pairs, of which 14 are in institutions. 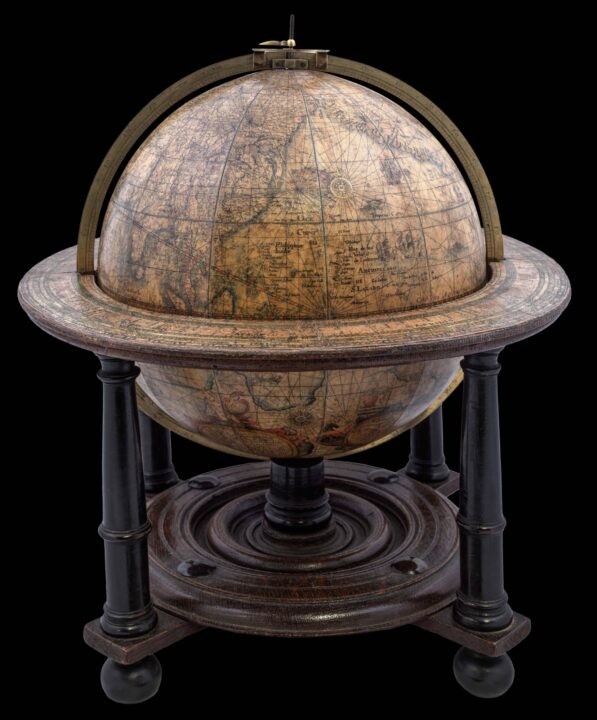 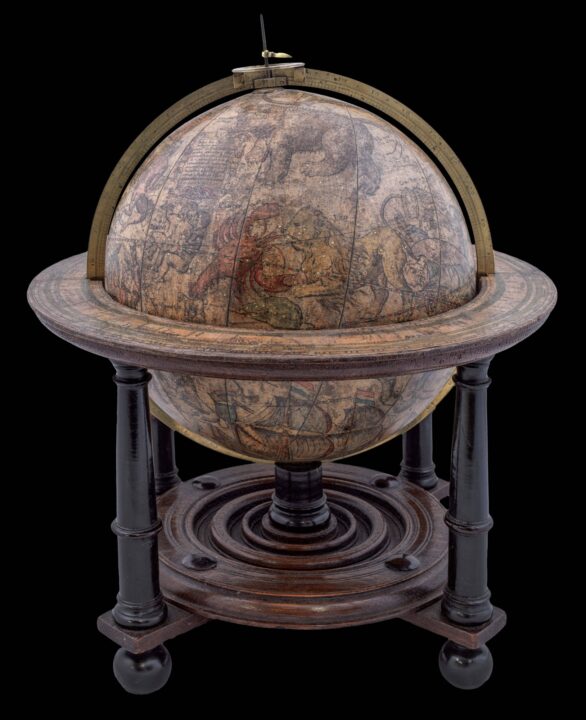