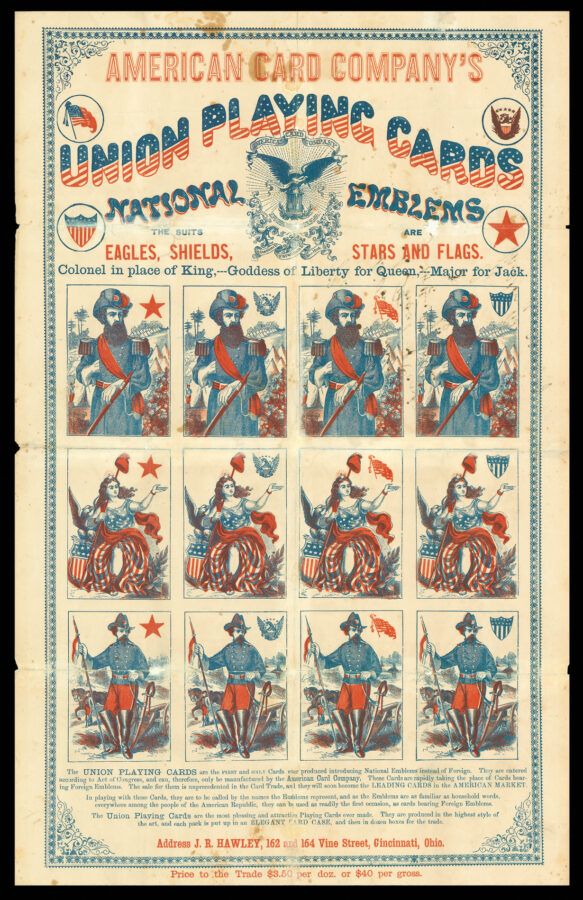 ”[The] American Card Company was operated by Benjamin W. Hitchcock, owner of a music and publishing business at 14 Chambers St., New York. The business consisted of sheet music, books, musical instruments, printing presses, and type. The time frame that Hitchcock printed playing cards is questionable, but assumed to be between 1862 and 1864 based upon their boxes and dates found on tax stamps. The ace of eagles clearly states that the American Card Company had offices at 14 Chambers St. and 165 William St. in New York City.”

​“Three versions of the Union Cards were made especially for Americans. This was conveyed through the following message on the Union Cards box, ​‘THE AMERICAN CARD CO. Confident that the introduction of NATIONAL EMBLEMS in place of Foreign, in PLAYING CARDS, will be hailed with delight by the American People, take pleasure in presenting the UNION PLAYING CARDS. As the first and only Genuine American Cards ever produced, in the fullest confidence that the time is not far distant when they will be the leading Card in American market. Explanation. The Union Cards are calculated to play all the Games for which the old style of Playing Cards are used. The suits are EAGLES, SHIELDS, STARS, and FLAGS, GODDESS OF LIBERTY in place of Queen, COLONEL for King, MAJOR for Jack. In playing with these Cards, they are to be called by the names the emblems represent, and as the Emblems are as familiar as household words, everywhere among the American people, they can be used as readily the first occasion as Cards bearing Foreign emblems.” — (Kristin Patterson, It’s A Wrap! U.S. Revenue Stamps Used on Playing Cards, 1862–1883, p. 21)

The text upon the advertisement reiterates much that was written upon the card case, with a somewhat more strident tone: ​“The sale for them [i.e. the cards] is unprecedented in the Card Trade, and they will soon become the LEADING CARDS in the AMERICAN MARKET… The Union Playing Cards are the most pleasing and attractive Playing Cards ever made. They are produced in the highest style of the art, and each pack is put up in an ELEGANT CARD CASE…”. Below the text is the address of, ​“J. R. Hawley, 162 and 164 Vine Street, Cincinnati, Ohio”, the distributor of the cards in Cincinnati, with a ​“Price to Trade $3.50 per. doz. or $40 per gross.”