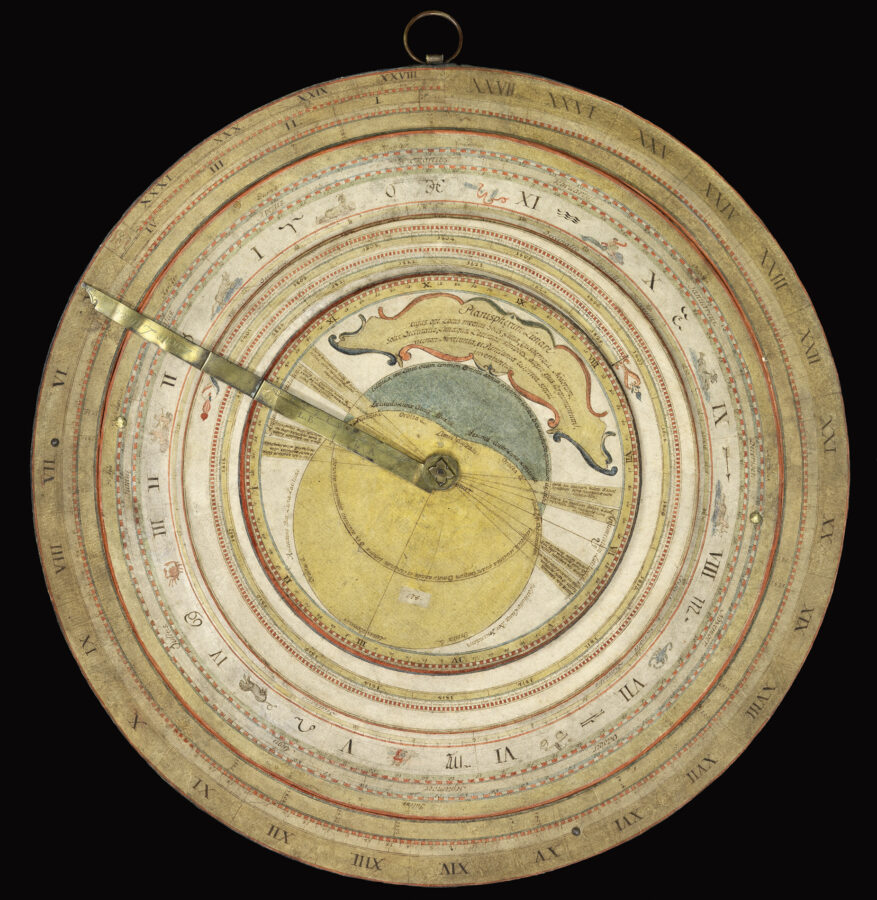 Content
1. The smallest volvelle bears a scale covering 12 hours on its outer ring. It also shows the ecliptical motion of the Sun, the Moon’s orbit, the line of nodes, and the arguments of latitude (in other words, the distances from the nodes).
2. On the second volvelle, a scale covers the years from 1801 to 1825. each year is subdivided in twelve months, with the abbreviated name written for each month.
3. The following volvelle carries a series of scales showing a monthly calendar, a zodiac calendar with skilfully drawn pictures and the symbols of the signs. Below the zodiac is a scale for the declination of the sun throughout the year, set in four sequences of three.
4. On the outside rim of the volvelle is another calendar scale in which the months are unevenly distributed. This scale presumably was to be used in conjunction with the outer scale on the circular base plate. In addition, the volvelle holds two brass studs that most probably helped the user turn the disc to the desired position. This latter scale gives the days, subdivided in hours. The days are numbered I to XXXI, with the number I coinciding with XXVII and 8 hours (the sidereal period of the Moon), which results in a double numbering from XXVIII to XXXI. Below this scale for days, there is a series of dates, all confined to the period 1801 to 1825, presumably for solar eclipses. The brass rule or pointer holds a horizontal scale from 5 to 0 (LA-southern declination) and from 0 to 5 (LB-northern declination), indicating the latitude of the moon with respect to the ecliptic. The closer to 0 at new moon or full moon, the likelier an eclipse is to occur. The rule is engraved with ​“Locus Lunae”. The circular scales serve to set the moon’s position and node relative to the sun, from which the user can then infer the lunar phase and whether an eclipse will occur at new moon or full moon.

Manuscript instruments of this type are rare, especially in such good condition, as no other exact copy is recorded to date. Similar instruments were produced at the end of the sixteenth century, mostly in brass. Sir Robert Dudley (1573–1649, see item 17) had a lunar calculator made by Charles Whitwell (c. 1568–1611) ‒ a brass disc of 72 cm diameter overall, which was the most complex instrument made during the sixteenth century. Inscribed ​‘Sir Robert Dudley was the inventor of this instrument’, its purpose was to calculate the place of the moon over a period of thirty years. It is now in the Museo di Storia della Scienza in Florence, Italy. Another similar paper device was printed, with detailed instructions, in 1786 in Vlissingen (Flushing) in the Netherlands, advertised as a ​“Starkundige Maan-Wyzer en Almanach” (Astronomical Moon Pointer and Almanac) by Henricus Schortinghuis.
/