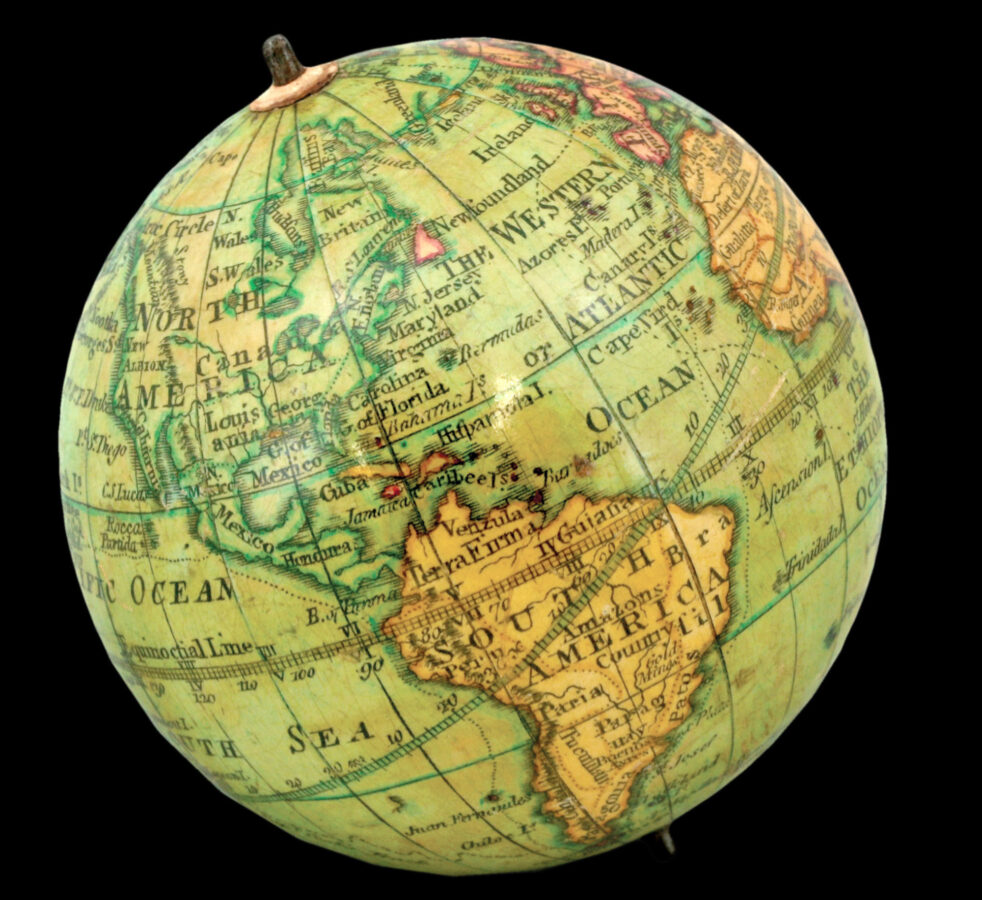 By MINSHULL, George after LANE, Nicholas, 1816

Biography
George Minshull (fl1800-1835) was a toymaker and carver. Although based in Birmingham, there was a ​“George Minshull & Son” registered in Hatton Garden in London in 1814, suggesting the globe was sold there. It was common for small cartographic items and scientific instruments to be sold alongside toys.

Geography
Minshull’s globe is an updated version of Thomas Lane’s issue of his father’s pocket globe. Minshull was one of several makers who reissued Lane family globes — his imprint has been pasted over the original. Nicholas Lane’s pocket globe, with completely new terrestrial plates, was first issued in 1779. His son, Thomas, updated the plates in 1807 and sold them wholesale. The present globe is based on Thomas’s updated plates.

​“New South Wales, Botany Bay and Cape Byron are depicted in New Holland (Australia), and ​“Buenos Ayres” (Buenos Aires) appears in South America. Two years later there were more changes: Dimens Land (Tasmania) is separated from New Holland by the Bass Strait; Port Jackson (Sydney) is added to the eastern coast of the mainland; and Sharks’ Bay and ​‘South C.’ are newly marked on the western side. The Antipodes of London are also shown. In northwest America, ​“New Albion” and the ​“Stony Mountains” (the Rockies) have been added. Curiously, the date of Captain Cook’s death, 14 February 1779, is another late addition squeezed in below the Sandwich Islands” (Sumira).

By 1816, the date of the globe shown here, the geography has been altered yet again: ​“At the southern tip of the Californian peninsula, ​“C. S. Lucas” (Cape San Lucas) is now shown… ​“Dampier’s Anchor”, where William Dampier first reached Australia, is marked off the north west coast of New Holland, and we see a mysterious ​“Labyrinth” [The Great Barrier Reef] off the north-east coast” (Sumira).

Astronomy
The celestial gores, which were acquired by Nicholas Lane from Richard Cushee sometime in the mid-eighteenth century, are geocentric in orientation. The difference is most noticeable in the orientation of Ursa Major, with the bear facing the other direction. The deep green colour is characteristic of Lane globes. Minshull has put his own stamp on the celestial gores by only colouring the constellations in green. 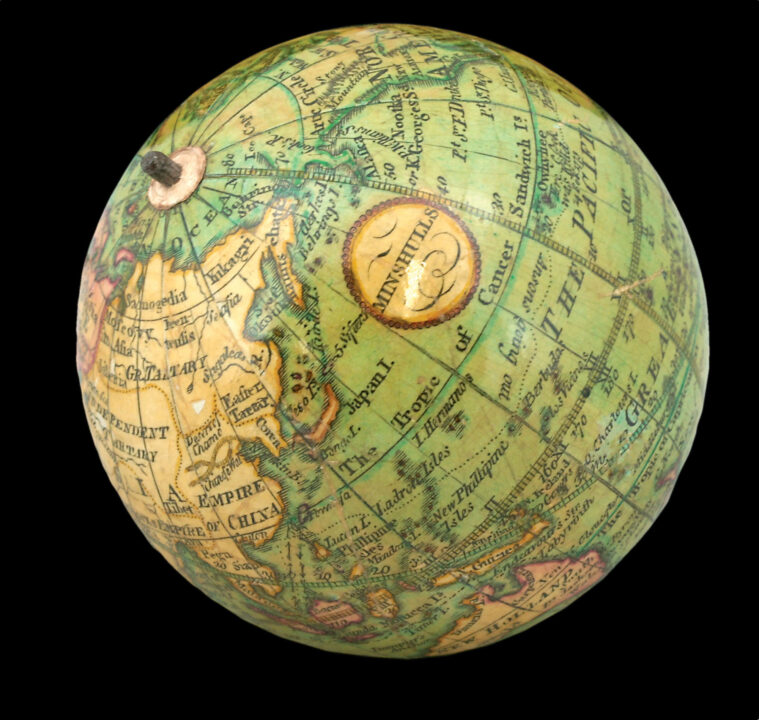 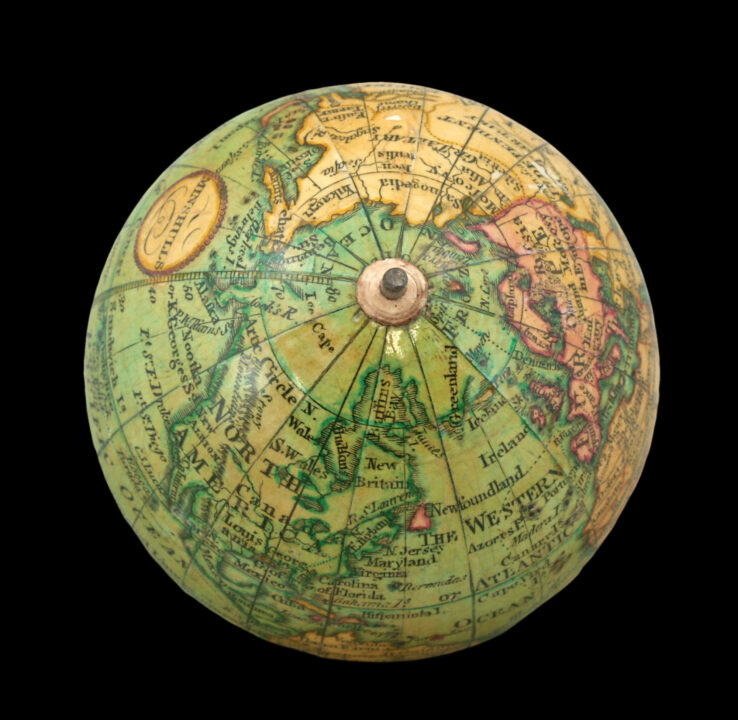 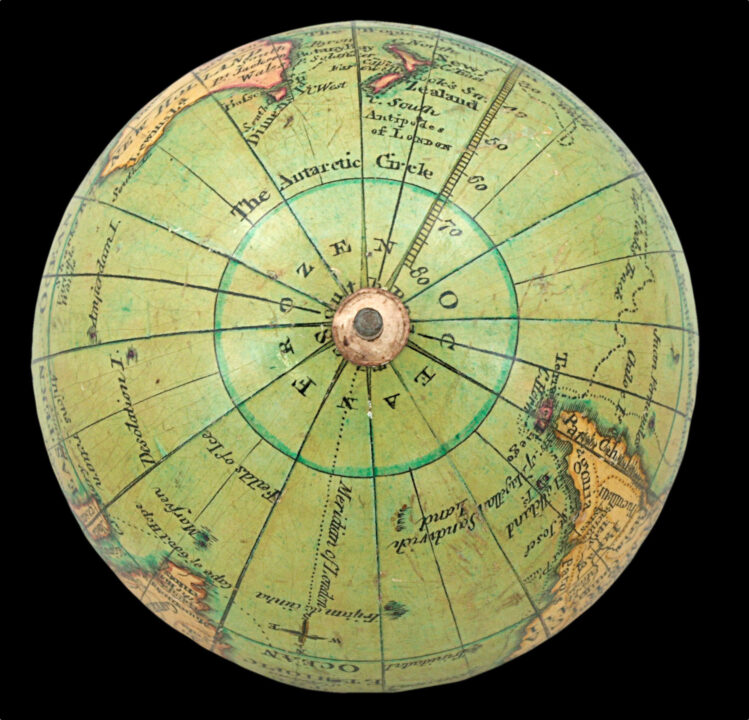 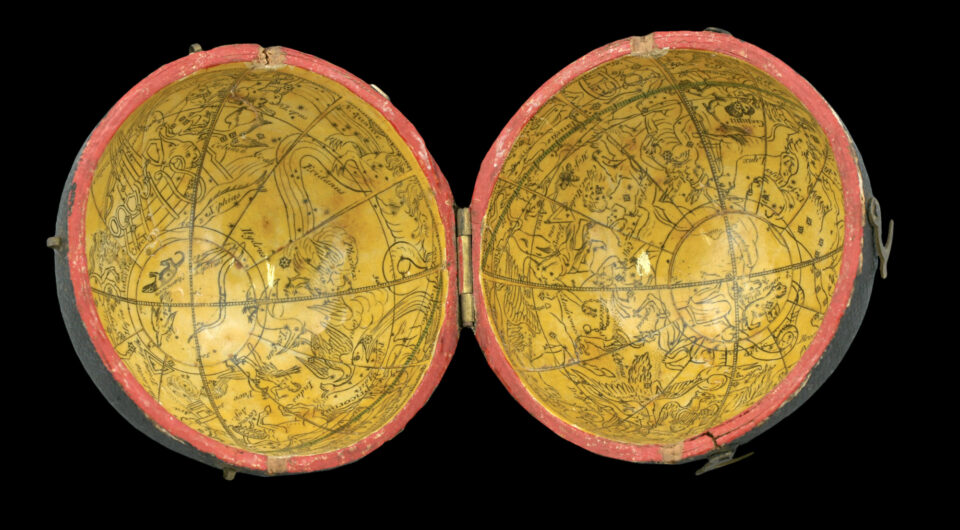