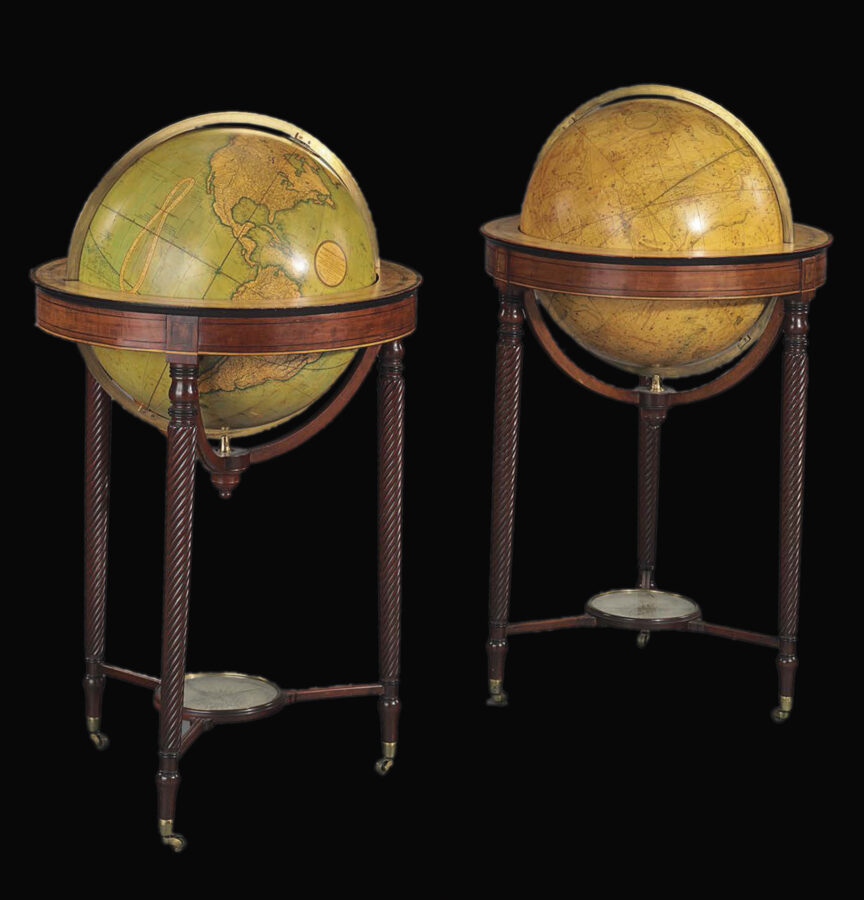 Cary’s New Terrestrial Globe; Cary’s New and Improved Celestial Globe Cary’s New Terrestrial Globe Exhibiting the Tracks and Discoveries made by Captain Cook; also those by Captain Vancouver on the North-West Coast of America, and M. de la Perouse on the Coast of Tartary — Cary’s New and Improved Celestial Globe, on which is carefully laid down the Whole of the Stars and Nebulae contained in the Astronomical Catalogue of the Rev’d Mr Wollaston, F.R.S. Compiled from the authorities of Flamsteed, De La Caille, Hevelius with an extensive number from the Works of Miss Herschel. The whole adapted to the year 1800 And the limits of each Constellation determined by a Boundary Line

John Cary, the elder (1755–1835) was a prominent English cartographer, engraver, globe maker and publisher. With his brother William, J. & W. Cary was among the most successful of the thriving London map, globe and instrument trade of their day. This, their largest pair of globes, is finely engraved and hand-coloured as issued.

The terrestrial sphere shows the routes of the eighteenth century circumnavigators and explorers of the north Pacific, James Cook and his followers; Vancouver, La Perouse, Phipps, Pickersgill, and Russian navigators including Rasmyloff. Important new information of the American northwest and Asian northeast coasts appears clearly on the scale afforded by this size globe. Kept up to date, the 1819 edition includes the route and discoveries of John Ross in South Shetland Is. (discovered by William Smith in February, 1819); and the Northwest Passage, found by W.E. Perry in 1819/20 (with the legend Winter’g Harb’r of Perry & Liddon). In advertisements for his 21 inch globes in various of his geographical works, Cary stated that he had availed himself of the voyages of Mungo Park (West Africa); ​“Clark & Lewis(!)” (Western U.S.); Humboldt (Latin America); Flinders (Australia); Elphinstone (maritime) and Capt. Ross (Arctic). Of further interest is the political border between the U.S. and Canada, indicating that the U.S. controlled lands well north of what the final resolution would proclaim a few decades later.

The celestial globe, with axis running through the celestial poles, was also kept current with the astronomical findings of scientists including the renowned British astronomer Caroline Herschel, who updated and corrected the ​“Observations of the Fixed Stars” of Flamsteed. ​“It contained some 3,500 stars, more than any previous globe.” — Kanas.
Celestial globes had been used in classical Greece to portray the heavens, but it was not until the 1490s that the use of terrestrial globes was recorded. Fine examples were made in limited quantity during the sixteenth and seventeenth centuries from engraved gores, and by the eighteenth and early nineteenth centuries globes came into popular use.

Sir Herbert G. Fordham, writing in 1925, noted: ​“Globes, once so essential in polite education, have almost entirely disappeared. John Cary merits special notice as a maker and publisher of globes, both terrestrial and celestial.” Earlier globes often carried obsolete geographical or astronomical information, while Cary’s incorporated many contemporary geographical discoveries made during an historic period of active exploration. That new information is portrayed cartographically on this important pair of globes.