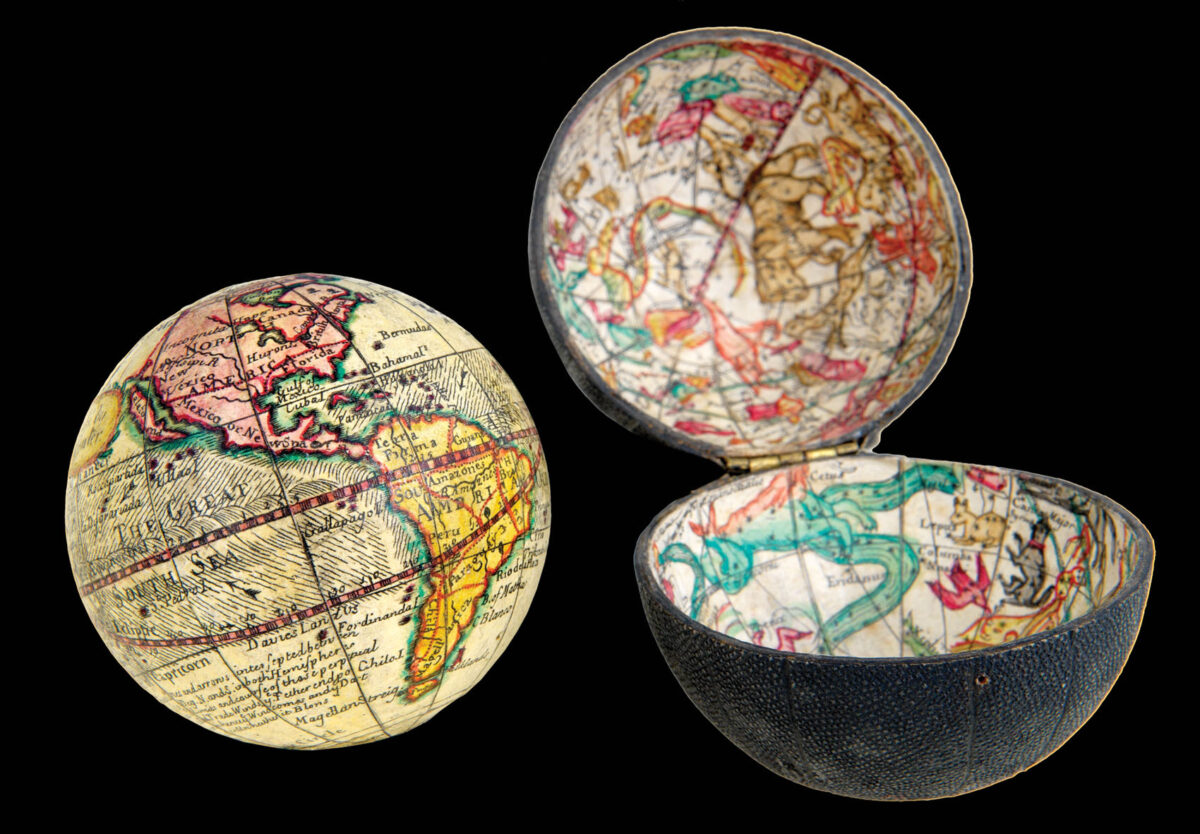 The name of J. Fowler appears in a small cartouche to the left of California. The globe and case bear a striking resemblance to an example by Charles Price dated 1701, housed in the Stewart Museum (1984.29.1), Montreal — the earliest pocket globe in their collection; an example published by John Senex and Charles Price housed in the National Maritime Museum, London, (GLBOO13) dated circa 1710; and another by Price in the Science Museum, (1983–791) London, dated 1716.

The typonymy of the present globe and the NMM example are almost identical:

”[the globe] notes the location of the Antipodes to London, trade winds are indicated between the tropics. California is drawn as an island. Australia is drawn according to the Dutch discoveries but the label: ​‘New Zeland’ is assigned to Tasmania and New Zealand itself is not drawn. The Dampier Strait is labelled: ​‘Dampiers Str.’ There is no hypothetical southern continent but inside the Antarctic Circle is a label: ​“Incognita”. Around the north-pole, there is a quotation: ​“Quo non Mortalia pectora cogit Auri sacra fames”.

​“The inaccurate quotation… is from Virgil’s ​‘Aeneid’, III, 56… which in the translation of Robert Fitzgerald reads: ​“To what extremes will you not drive the hearts of men, accurst hunger for gold!’ ”. (Dekker).

Although the quotation is evidently a reference to the numerous unsuccessful attempts to find the lucrative Northeast and Northwest Passages to Asia; it is also likely to refer to Martin Frobisher’s three voyages to the New World (1576–78), which at first heralded the discovery of large gold deposits, only for the mined ore to turn out to be iron pyrite or Fool’s Gold.

The Ocean names upon both examples are the same, save for the ​‘K’ at the end of ​‘Atlantick Ocean’ upon the NMM globe.

The present globe also includes two large blocks of text — not present on either institutional example — set in the South Indian, and Pacific Oceans, dealing with monsoons and trade winds respectively.

Stylistically it has been difficult to ascertain whether or not the present globe was formerly the work of Charles Price or John Senex. A close look at the Price/​Senex example in the NMM, shows that the globes — although carrying the numerous similarities noted above — are sufficiently different in their placement of place names to suggest that the plates were heavily re-engraved between 1710, and when they came into the possession of John Fowler, in around 1730.

We know that Price moved into John Senex’s shop in 1706, where they collaborated, but also continued to produce his own work; including pocket globes. The association did not last long as Price went into partnership with George Willdey in 1710, and, later, with Benjamin Scott in 1714. Little is known of Price after this date. It has been suggested that, unable to compete with John Senex, he went into land-surveying to supplement his income. He surfaces again in 1731, spending Christmas in Fleet prison. He died in 1733.

After the break-up of the partnership in 1710, John Senex moved into new premises at the ​“Sign of the Globe Salisbury Court”, where he was in partnership with John Maxwell until 1721. He then moved again in c1724 to ​“Opposite St Dunstan’s Church in Fleet Street’. In 1728 he was made a Fellow of the Royal Society, which he proudly displays on all subsequent work. In 1731, he issued a new pocket globe, dispensing with the old Senex and Price plates (See Sumira page 118). Following Senex’s death, the new plates were acquired from Senex’s widow in 1757 by George Adam, who went on to publish them up until the turn of the century.

Whether John Fowler acquired the plates from Senex, following the issuing of his new globe in 1731, or from a highly indebted Price at some point in the late 1720s, is unclear.

What perhaps suggests that the present globe is after Charles Price, is in the treatment of the cartouche. In the examples we have been able to trace — the Stewart Museum (dated 1701) and the Science Museum (dated 1716) – the globes simply bear the words ​“C. Price fecit’ ” The same format is aped by Fowler: ​“Sold by I. Fowler”, all be it in English. Having said this, the Price globes lack a few of the inscriptions upon the present and NMM example – the most striking being the Latin quotation from Virgil in the Arctic.

John Fowler (fl. c. 1720–1739), had premises at ​“The Globe, Swithin Alley, by the Royal Exchange”, where he made and sold ​“slide-rules, sundials, and garden thermometers” (Taylor). The National Maritime Museum contains an azimuth compass by Fowler.

We are unable to trace any institutional example bearing the imprint of John Fowler. 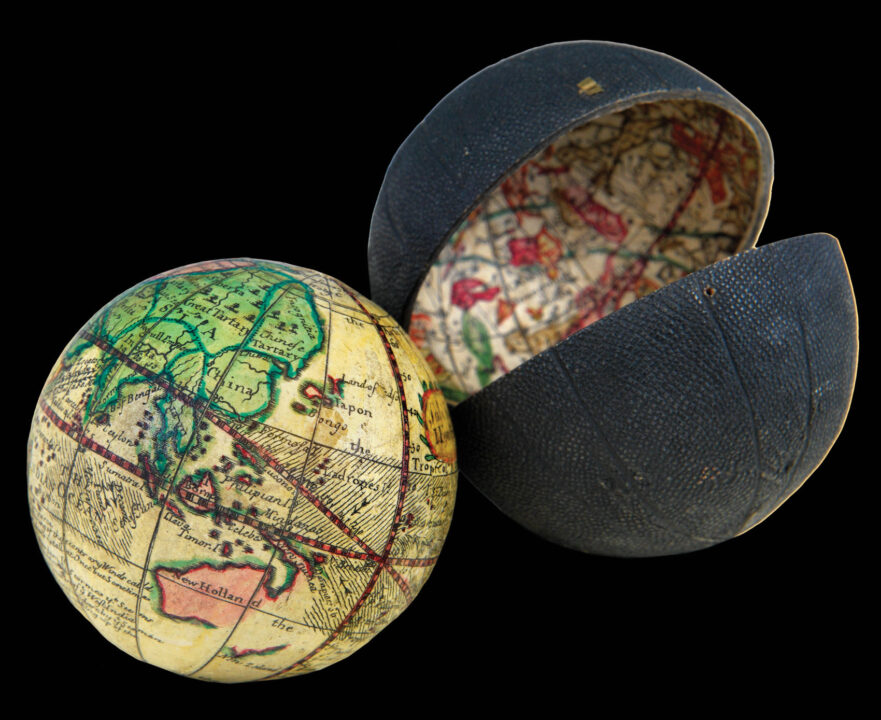 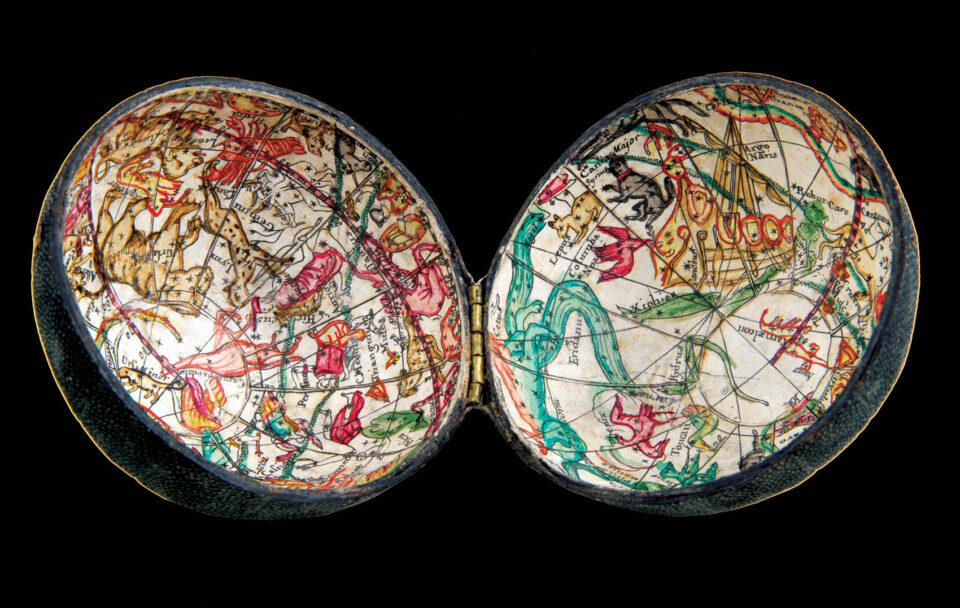 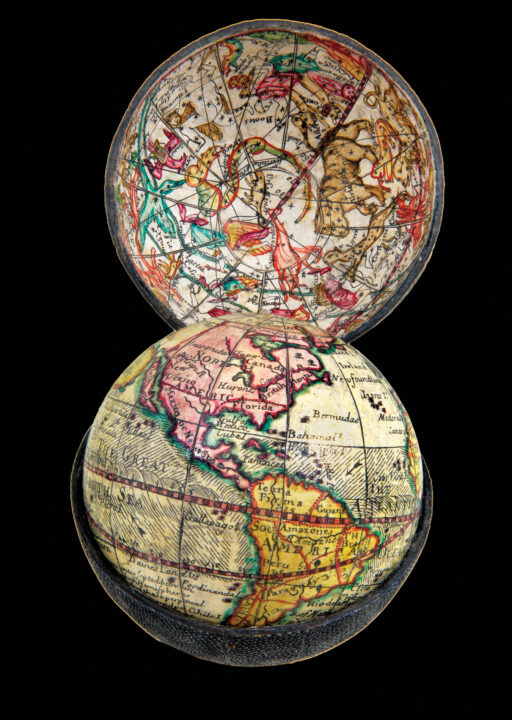