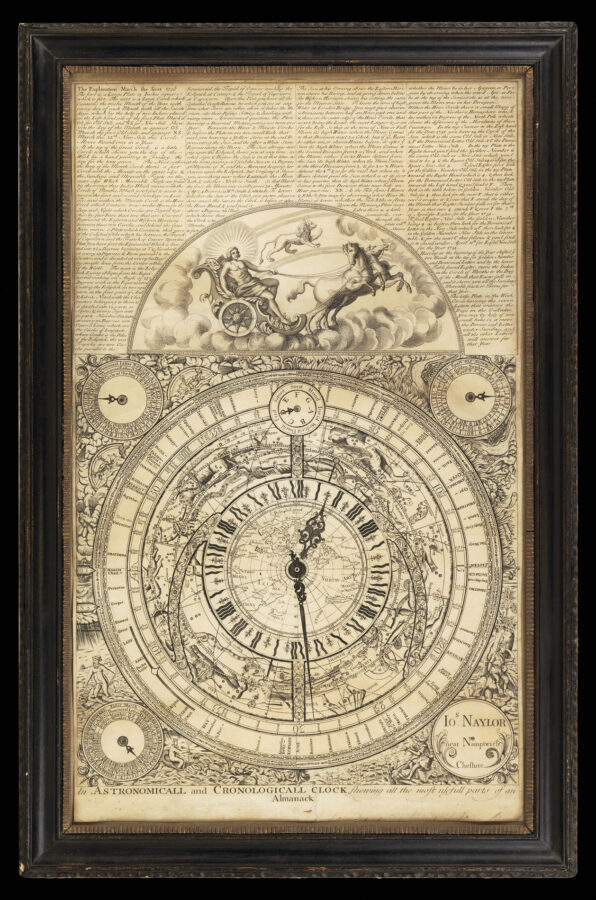 [Sheet entitled:] ​‘An Astronomicall and Chronologicall Clock shewing all the most usefull parts of an Almanack.’ ​‘Io.S Naylor near Nantwich Cheshire.’ Inset: [Untitled Map of the Northern Hemisphere south to Cuba].

John Naylor was one of an important school of clock-makers based in Nantwich, Cheshire, active from about 1725. By about 1740 he had relocated to London, and seems to have died there in 1752.

It seems likely that, in about 1726, he designed a series of engraved metal plates that could be used to make a clock face, such as the example in the British Museum. In parallel, he must have published a second, near identical clock face, to be used as a promotional broadsheet for the clock, or as an instructional guide to the uses of the clock. While virtually identical, the promotional version has engraved hands over the face of the clock, so it could not be used to make up a working clock face, as the owner would have the mechanical, rotating hands and the engraved hands of the print.

As he was principally a clockmaker, rather than a mapmaker, it is perhaps no surprise the geography is outdated. In fact, the cartography is largely based on John Carte’s astronomical clock of circa 1700; this would suggest that the engravings were first made in the early part of Naylor’s career, reinforced by the Nantwich address used, but no example of the broadsheet datable to this period has been traced and, until such an example has been found, this first state must be speculative (but likely).

The British Museum has the first state of this promotional engraving, with the text at the top commencing ​“The explanation March the first 1725/6 …”, which was acquired with their example of the clock.

The British Museum also has a second state of the complete promotional engraving, with the text at the top revised, with the text commencing ​“The explanation March the first 1750/1 …”, evidently published to coincide with, and capitalize on, the British change-over from the Julian to Gregorian calendar. The British Library example is of the clock only, lacking the Sun god engraving and text.

This example is the third state, with the Christian name in the imprint revised from ​‘Jo.n’ to ​‘Jos.p’ ( John Naylor’s successor Joseph Naylor), apparently also in 1752, and with the hand of the various dials in the border re-aligned.

Joseph Naylor seems not to have been a clock-maker, but seems to have inherited a finished clock. In time-honoured fashion, he planned a lottery to maximise his profit on the inheritance. There is an accompanying booklet to launch the lottery entitled ​‘An explanation of an Astronomical Clock …’ and, presumably, he re-engraved the broadsheet at the same time.
/