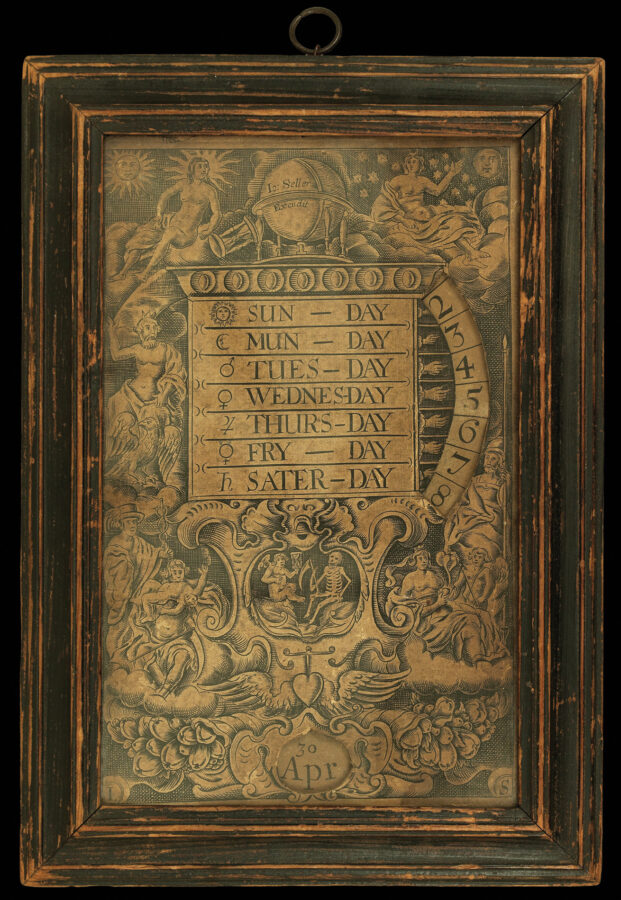 An engraved perpetual calendar, fitted with two wooden volvelles (or ​“rundles” as Seller seems to have called them) each with its own engraved dial to adjust month and date, the whole framed in softwood and glazed in almost certainly its contemporary frame.

The engraving, seemingly of Seller’s own design as he adds his initials at the lower corners as well as his imprint, is a fine example of seventeenth century English work, with figures representing the ruling planets — Apollo, the sun god for Sunday; Luna or Diana with her crescent crown for Monday; Mars, with helmet, shield and spear — the two latter forming the planetary symbol for Tuesday; Mercury with his winged hat and snakes-staff for Wednesday; Jove or Jupiter, with his eagle — but seemingly without his thunderbolt, for Thursday; Venus with her mirror for Friday; Saturn with his scythe and eating his child in fulfilment of the terrible promise for Saturday — as well as conventional figures for death and escaping time, cornucopia, and a winged heart pierced by a sword, which here appears to be used as a symbol of the possibility of repentance. The days of the week are furnished with their planetary symbols, with Wednesday lacking Mercury’s hat-wings at the top (without which it is identical to that for Venus). A later attempt has been made to correct this in pencil, but unfortunately the wrong symbol — that for Venus — has been corrected.

Seller’s published pamphlets and almanacs (B.L. 532.a.6 is an attractive bound collection of these) describe the uses of the ​“perpetual almanacks of several contrivances” which he advertised and furnished such additional aids as tables of sunrise and sunset, the length of days, significant anniversaries, new moons, tide tables and so forth, as well as ​“a table shewing what planets rule every hour of the day and night … by this table you may perceive that ye sun governs ye first hour after sun rising on Sund [Mars] ye second …”. Of a similar device to the present one he notes ​“the uppermost of which rundles after it is once set must be moved every week and it will shew you the day of the month through the uppermost hole …”.

Seller led a remarkable life, not least in having survived being found guilty of high treason at the Old Bailey in 1662. He was eventually pardoned and went on to become one of the leading mapmakers of his day, the first (as Pepys pointed out) to break the Dutch monopoly in the provision of sea charts, attempting a national survey, and founding the Merchant Taylors’ school of mapmakers, which through a line of master and apprentice descent went on to dominate the London map in the eighteenth century, including such names as Charles Price, Emanuel Bowen, Thomas Kitchin and Thomas Jefferys. He was also the author of ​“Practical Navigation” (1669), within the limits of contemporary practice a text-book of exemplary clarity, first noting contemporary improvements to the equinoctial ring-dial.

He had originally been an instrument-maker and to the end of his days continued to manufacture and provide a complete range of compasses, cross-staves, scales, quadrants, astrolabes, dials, callipers, circumferentors, theodolites, protractors, survey chains, rods, gauges, dividers, sectors, telescopes, prisms, spectacles, and much else besides (advertisement in BL Maps 8.c.5). It would appear that apart from a fragment of a marine compass in the Museum of the History of Science, Oxford (noted by Webster) no examples of his work in this field are known to survive or are
recorded. The present example, although among the least technically demanding of all his output, would appear to be a unique complete and working survival of the scientific and cartographic work of a figure of the first importance in seventeenth century London. 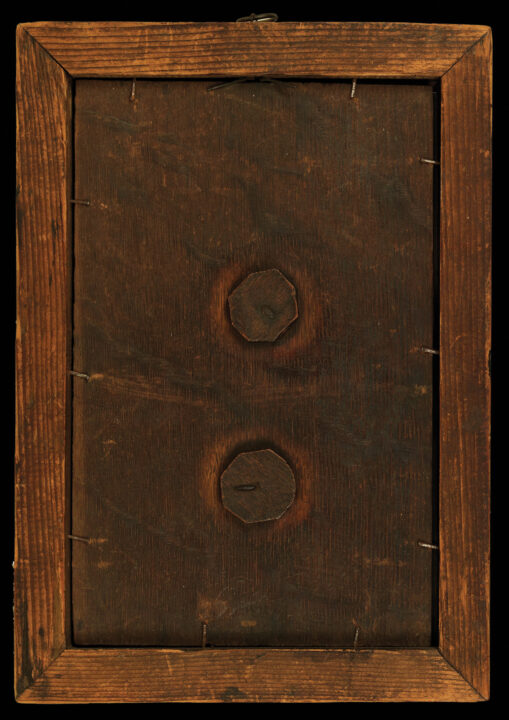