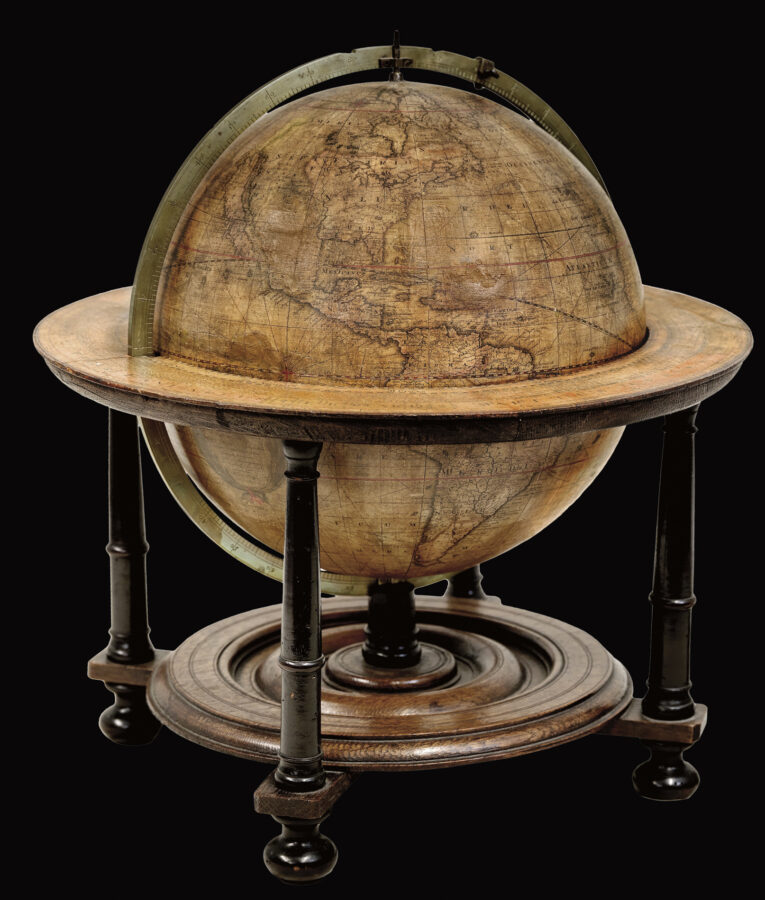 A pair of Valk Globes

This elegant pair of globes represents one of the final flourishes of the great era of Netherlandish globe production. The terrestrial globe captures the World during a fascinating epistemological stage. In North America, California is prominently depicted to be an island stretching toward the Fretum Aniani (the fabled ​‘Northwest Passage’), dividing it from the enigmatic landmass, ​“Terra incognita sive terra Esonis” that supposedly occupies the void between the Americas and Asia. Mexico Nova is shown to be inhabited by various Apache nations, while the Atlantic seaboard features various colonial entities, Carolina, Virginia, Belgia Nova and Scotia Nova. Oceania retains a mysterious aura, evincing only the Dutch discoveries made during the first half of the seventeenth-century, for these lands had scarcely been visited since. Australia, or Holandia Nova, lacks an eastern coastline, while a partially formed New Guinea is shown to merge into this great landmass. Tasmania is labelled Anthoni [van] Diemens [Landt], while the portions of New Zealand, discovered in 1642–3 by Abel Tasman, emerge from the sea. An Antarctic continent is entirely absent. Elsewhere, the Great Wall traverses the northern reaches of China. Attractively, some regions are coloured in a rich green hue, while various cities are heightened by a dot of gilt.

The pageant of resplendent imagery featured on the celestial globe is derived from the celebrated work of the Polish astronomer Johannes Hevelius, the Uranographia (1687). A total of fifty-four stars and celestial groups, beautifully touched in gilt, are labelled, while the forty-eight Ptolemaic constellations and four of the modern constellations are depicted. Three southern constellations are featured, in addition to the Milky Way and the Magellanic clouds. A magnitude table is included, located below Corono Australis within a cartouche surmounted by the Sun.

The Valk family firm was one of the most highly respected and enduring manufacturers of globes and maps in Europe. Gerard Valk, the family patriarch, apprenticed in London in the 1670s under the mapsellers David Loggan and Christopher Browne. Following his return to Amsterdam, in 1687, he formally established his own business, often working in concert with his brother-in-law, Petrus Schenk. Valk and Schenk would famously go on to produce an edition of Cellarius’ Harmonica Macrocosmica (1708). While Valk was initially known for his monumental wall maps, he was tutored in the exceedingly difficult craft of globe-making by Pieter Maasz Smit, who specifically praised Valk in his 1698 treatise on globe making.

In 1700, Valk moved his enterprise into the Amsterdam shop formerly occupied by the legendary Jocodus Hondius. Shortly thereafter, Valk published his own globe manual, ​‘t Werkstellige der Sterrekonst, and issued the first pair of globes under his own name, at 12-inches in diameter, they were similar to the present pair. The Valk globes soon met with great acclaim, produced in a variety of issues: 3, 6, 9, 12, 15, 18 and 24-inches in diameter. It was not long before the family captured a virtual monopoly of the globe market. Around 1711, Gerard’s son Leonard became a partner, and assumed control of the business following his father’s death in 1726. After Leonard’s death in 1746, globe production continued for a time under the auspices of Maria Valk. That same year, the company’s catalogue advertised a pair of 12-inch table globes, precisely like the present pair, at a cost of 33 guilders. This was an immense sum, and indicative of the role of globes as true luxury items, geared to the intellectually sophisticated and culturally refined elite. 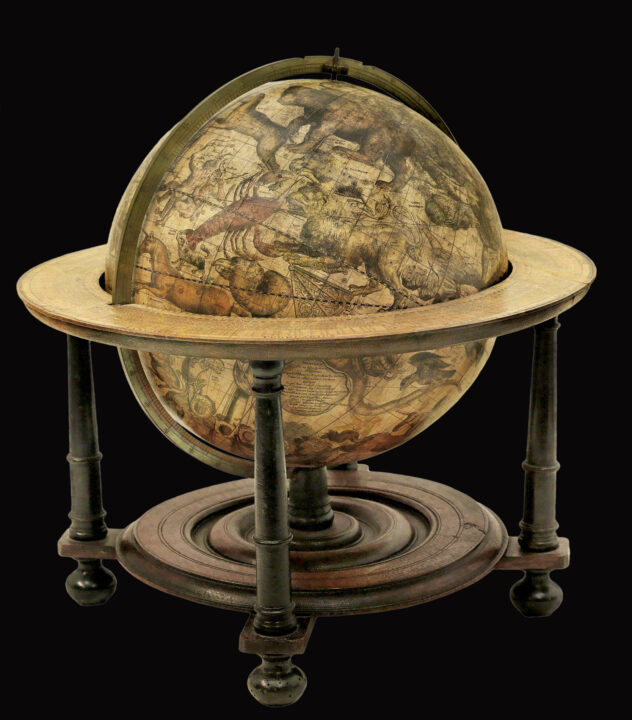