A rare booklet and pamphlet advertising Georg Lowitz’s never-realized pair of 36-inch globes, with a scarce gore of the east coast of North America.

The pamphlet advertising the globe, by Johann Franz, was first published in 1746 shortly after Lowitz had joined the firm of Homann’s heirs. The second advertisement, the booklet, was published some three years later and gives a detailed description of the progress of work on the large pair of 36 inch globes: the style of engraving, the mathematical and geographical problems encountered, and the numerous sources that Lowitz has drawn upon, most notably Henry Popple’s map of the 13 colonies, which he praises highly. Bound at the end of the text is a contract between the Cosmographical Society of Nuremberg and the Homann heirs’ firm. It states that a down payment of 36 ducats has been made by the society for a pair of globes, advertised on 1 December 1749 (i.e. the present advertisement booklet), with 120 ducats being the final price. The text goes on to state that the finished globes would be ready 30 months from the date of the contract, and shipped to the society as long as the bill has been settled in full. however, the contract is not all that it would seem, as the Cosmographical Society in question was, in fact, founded by the Homann firm in 1746 (the date of the first advertisement). The contract was, therefore, little more than an elaborate ruse to garner orders on the back of fact that a contract was already in existence between the manufacturers and a ​“respectable” society. A third advertisement was issued in 1753, giving reasons for the delay in the publishing of the globes. In the end, however, the contracted work was never completed, with only the small set of five and a quarter inch globes (published in 1747) being produced by the time Lowitz left the firm in 1757.

The title of the globe gore reads: ​‘Specimen trigesimae sextae partis ex globo terrestri trium pedum Parisii’ or ​‘A Specimen of the thirty- sixth part of a three Parisian foot globe’. The gore itself covers the north American east coast from nova Scotia to north Carolina, the Caribbean from Cuba to the Leeward Islands and the north coast of South America. The cartography, as Lowitz states in the booklet, is based upon the work of Danville, Charlevoix, Barriere, and Cadwallader Colden, among others; however, he reserves the highest praise for henry Popple’s multi-sheet map of America: ​“la Grande Carte de Popple merité le premiére rang”.

Georg Moritz Lowitz (1722–1774) joined the Nuremberg firm of the Homann heirs in 1746 and left in 1757 to become professor of mathematics at Göttingen University. his globes continued to be reissued by the firm, however, with editions appearing in 1779 and 1810. Lowitz moved to St Petersburg in 1767 to join the Russian service as a surveyor, and was murdered by Cossacks whilst working in the Volga region.

Rare. We are only able to trace one institutional example with both the pamphlets together: that held by Strasbourg university Library. 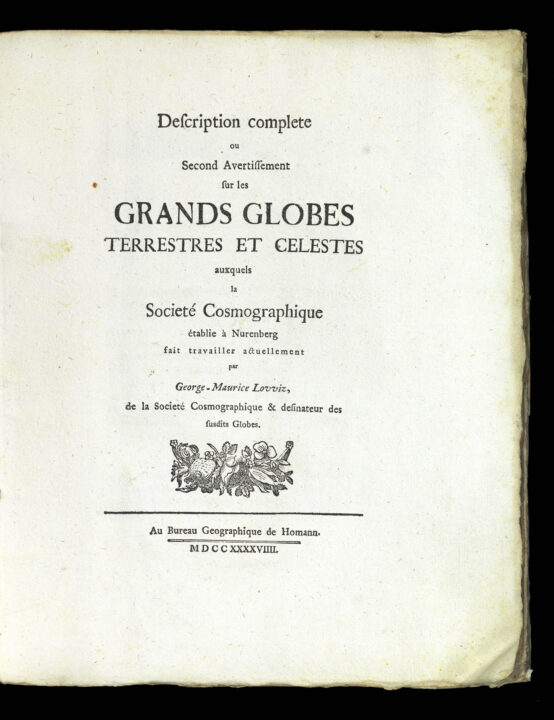