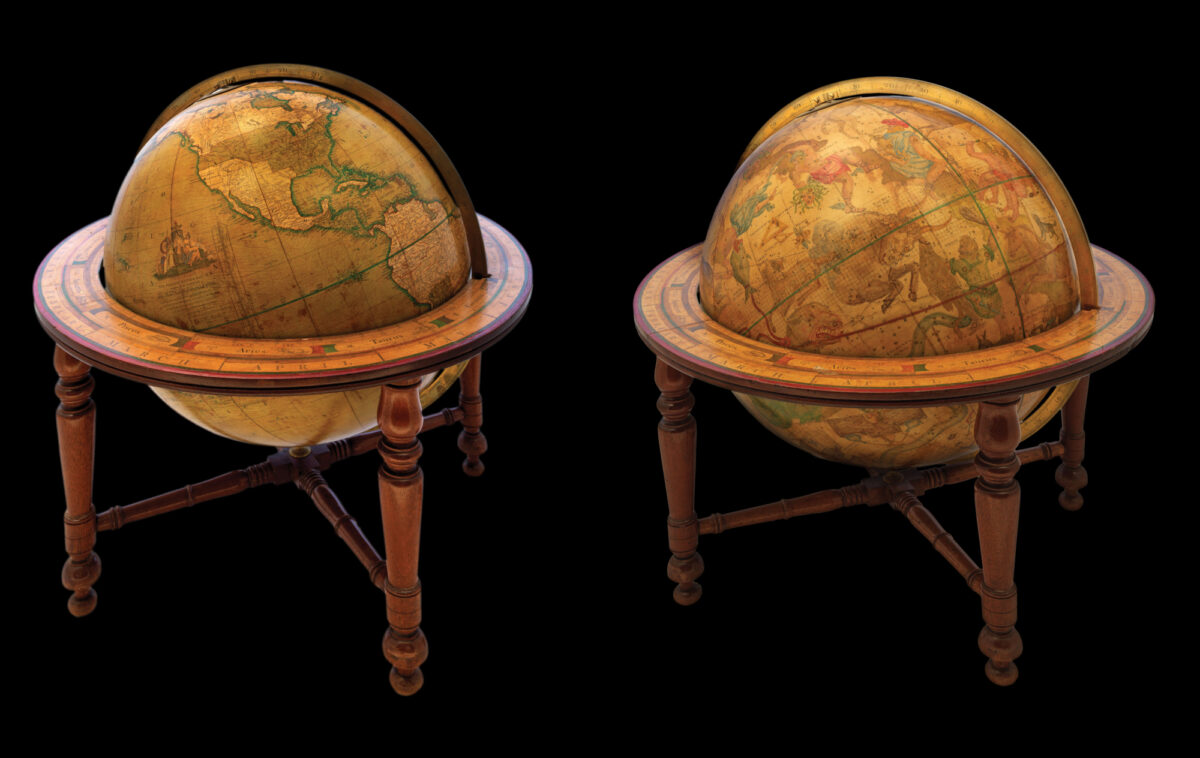 A pair of 18-inch Bardin Globes on Table Stands

The Bardin family were among the greatest globe makers in London from the late eighteenth to the early nineteenth century. The patriarch of the family, William Bardin (d. 1798), began globe production in the 1780s. The origin of Bardin’s globes is thought to be traceable to the early eighteenth century globes of John Senex. Fifteen years after Senex’s death, the copper plates for his globe gores were sold to James Ferguson.

In 1757, Ferguson transferred his globe trade, including his Senex globe gores, to the scientific instrument maker and lecturer Benjamin Martin (1704–1782). One of Bardin’s earliest globes refers directly to Ferguson: ​“A New, Accurate, and Compleat Terrestrial Globe… originally laid down by the late Mr. James Ferguson, F.R.S… 1783.” William Bardin’s connection with Ferguson is thought to be through Gabriel Wright (d. 1803-04), an apprentice of Benjamin Martin. Wright went to work for the Bardin family of globe makers and worked with Bardin in creating his first globe in 1782.

In 1790, William Bardin’s son, Thomas Marriott Bardin, completed a seven-year apprenticeship, and immediately joined ranks with his father, the firm thereafter trading as W. & T.M. Bardin. In 1798, the father and the son team began publication of their ​“New British Globes.” The 18-inch New British Globes include dedications to the scientist Sir Joseph Banks, President of the Royal Society (terrestrial) and astronomer Neville Maskelyne (celestial), and were frequently marketed by the scientific instrument makers and dealers W. & S. Jones. The skill required for the production of these 12- and 18-inch globes was much admired by the Bardin’s contemporaries. Following T.M. Bardin’s death in 1819, his daughter, Elizabeth Marriott Bardin, continued the family’s globe production until 1832, at which time the company’s title was passed to her husband, Samuel Sabine Edkins.
/