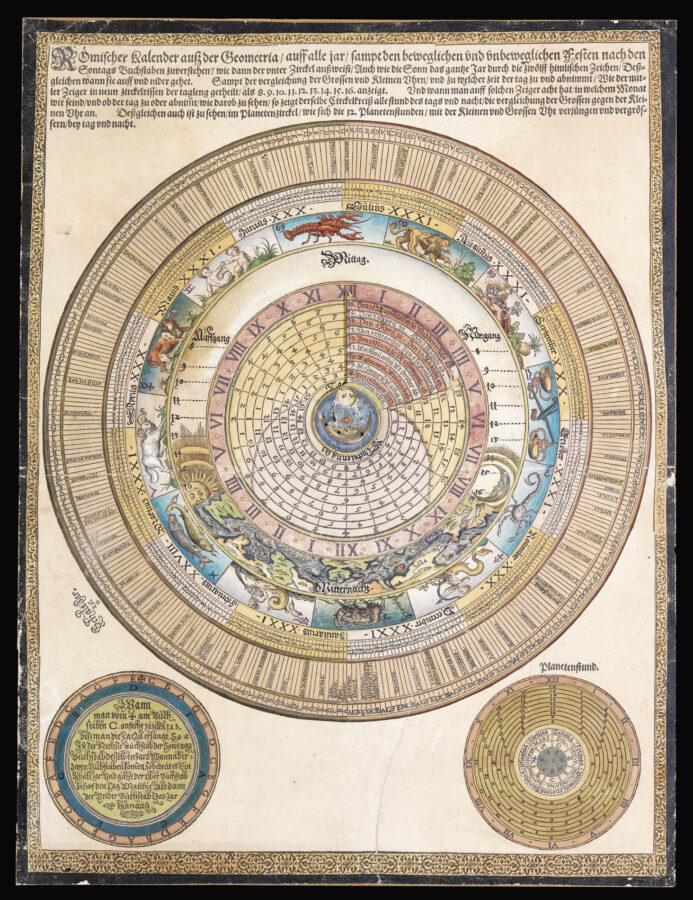 A deluxe, illuminated and coloured example of a rare wall calendar

A wall calendar with volvelle. Although few survive today, calendars formed a regular part of the print trade from the fifteenth century onwards and were produced at various levels of sophistication and expense. They range from simple, cheaply produced versions to elaborate examples of great artistry, such as Hans Holbein’s Sun and Moon Instrument (1534). The present example is a deluxe production: its large size is impressive; the illustrative elements, such as the astrological signs and topographical panorama, are finely executed; and it offers a complex range of calculations with the volvelle. Furthermore, the present example has been carefully finished with colouring and gold highlights. The panorama, although schematic, appears to depict the Mediterranean, from Arabia (with a mosque surmounted by a crescent) in the east to the Iberian Peninsula in the west. The calendar is known in only one other copy, at the Herzog August Bibliothek in Wolfenbüttel, which lacks the volvelle and is uncoloured.

Content
1. outermost two circles: Sunday letters, feast days.
2. next three circles: days of the month, months, zodiacal signs, showing longitude of sun in the zodiacal signs over the course of the year, starting with Sun at beginning of Aries on 10 March.
3. next two circles: lengths of day, depending on the hours of sunrise/​sunset, and the hours of the day in Roman numerals. For example, if the sun rises at 8 a.m. (on left) and sets at 4 p.m. (on right), the day length will be eight hours.
4. next ten circles, with moving central volvelle with attached sector, divided into ​“nachtlenge” (lower pink section) and ​“tagelenge” (upper yellow section). For example, for the outermost circle, from 15 May through 11 July, the sun rises at 4 a.m. and sets at 9 p.m. giving a day length of 17 hours. The pointer on the volvelle is set to the hour of the mechanical clock (the ​“grosse uhr”) and then read on the yellow or the pink sections the hour of the day or night, as counted from sunset or sunrise (the ​“kleine uhr”). Nuremberg counted hours starting at sunrise. Many towns to the east counted hours starting at sunset (Bohemian or Italian hours). The volvelle and the 10 circles permit conversion between these 3 hour-counting schemes, shifting through 9 sections of the year to adjust for the varying day lengths.
5. Small, lower right circle, ​“Planetenstund”, illustrates which planet is ruling each hour of the day, as day lengths shift from 16 down to 8 hours. The other small, lower left circle calculates the Sunday letter for any year. The instructions say to start counting at the cross, but do not indicate what year this is. The ​“Schaltjar 25” is confusing, since 1524 was the Schaltjar. The cross should be 1557, 1585 or 1613.
/