When maps and caricatures collide

The golden age of the comic and serio-comic maps extends from the middle of the nineteenth century to the dawn of the Second World War. Spurred by revolutions and wars, satirists and cartoonists channelled the contemporary political climate into maps that transformed countries into a variety of stereotypes, often in the form of animals and parodied political figures. The clever and witty exchanges between these caricatured figures on the map offered an entertaining visual representation of current events that had a broad appeal. These caricature maps carry two distinct yet intertwined functions — to educate us with their insightful depictions of political relationships while also entertaining us by presenting these relationships in a humorous way. 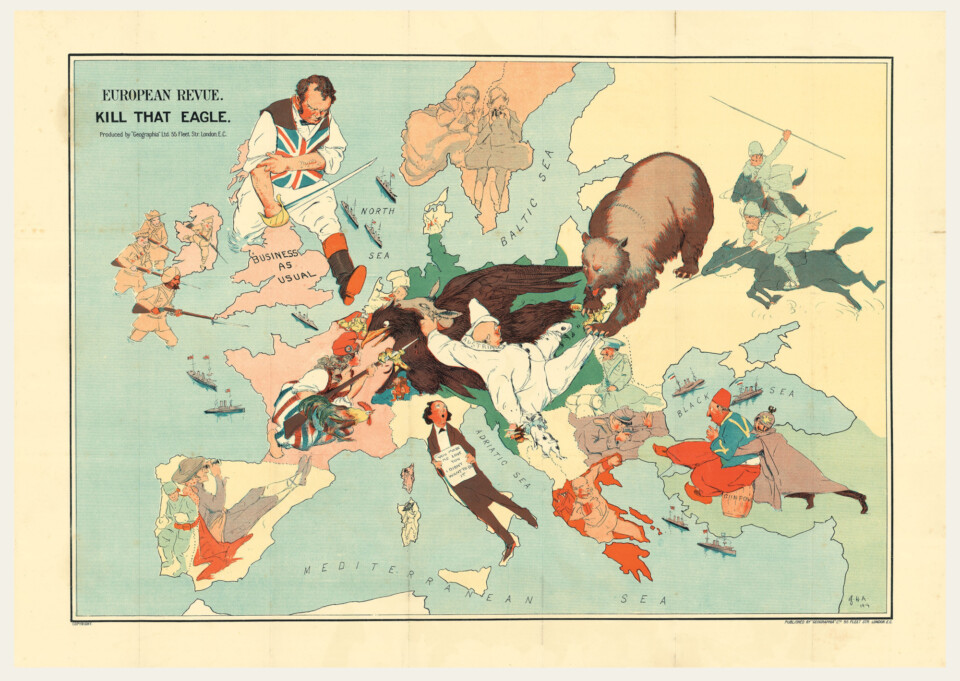 One of the art form’s greatest exponents was Frederick William Rose (1849–1915), an Englishman who worked for the Inland Revenue. Rose turned his hand to satire in 1877 when he produced his first map A Serio-Comic War Map of the Year 1877 (1). Rose describes his map as follows: ​“The Octopus – Russia — forgetful of the wound it received in the Crimea, is stretching forth its arms in all directions. Having seized hold of the Turk, it is eagerly pushing forward in the hope that it may overwhelm him, as it has already done Poland. At the same time, Greece seems likely to annoy the Turk in another quarter. Hungary is only prevented from attacking his neighbour, Russia, through being held back by his sister Austria. The Frenchman, remembering his late defeat, is carefully examining his weapons; and Germany is naturally interested in his movements, and holds himself in readiness for any emergency. Great Britain and Ireland are eagerly watching the fray — ready at any moment, at least, to prevent Russia from seizing the Turk’s watch, or interference with Suez. Spain is taking his much-required rest. Italy is rejoicing in her freedom. The wealthy King of Belgium is taking care of his treasure. Denmark’s flag is small, but she has reason to be proud of it’. 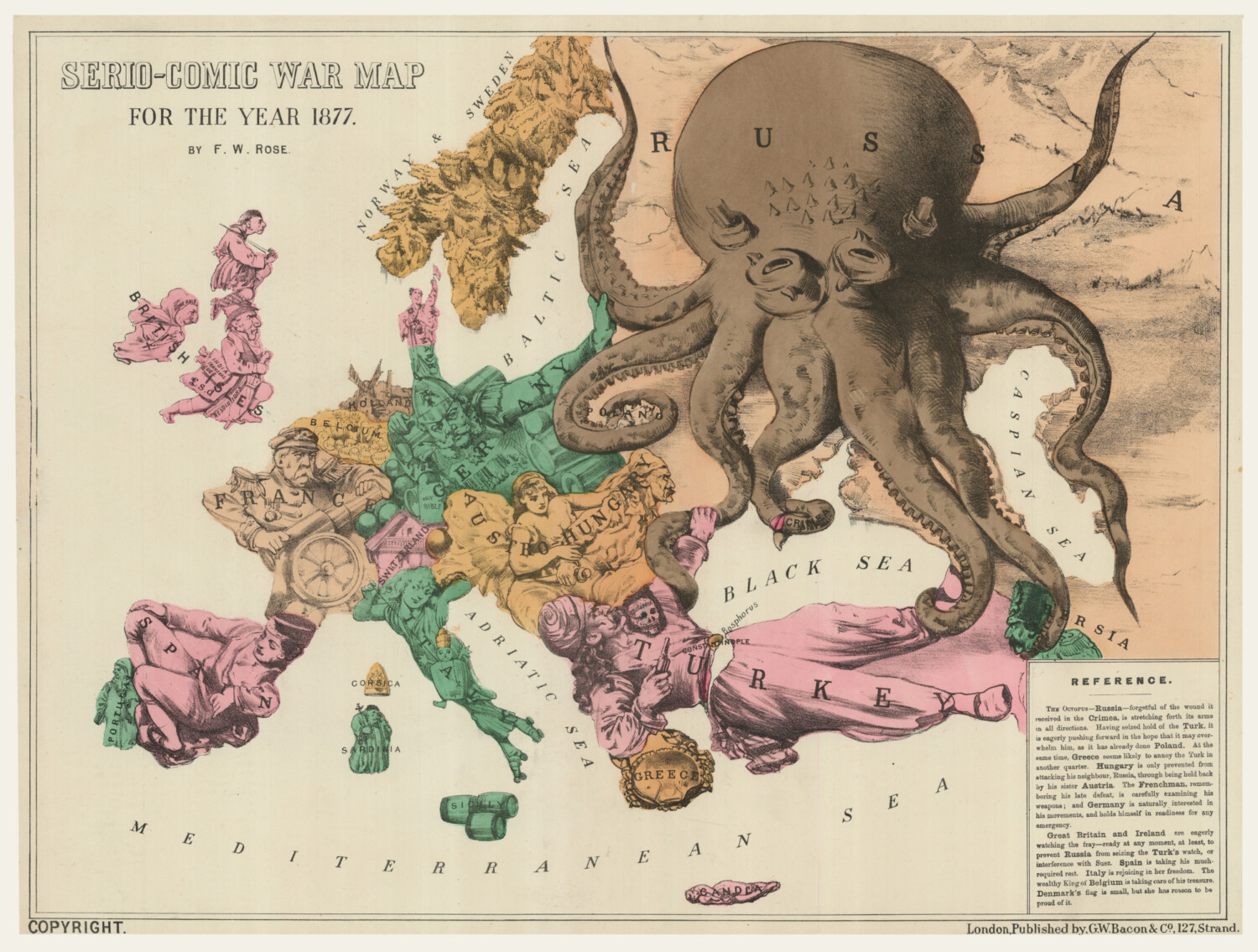 The widespread influence of Rose’s cartographic style — particularly in his depiction of Russia as an octopus – is visible in Kisaburo Ohara’s map A Humorous Diplomatic Atlas of Europe and Asia (2) composed at the outbreak of the Russo-Japanese War (1904–1905). Whereas Rose confined his image to Europe, Ohara has here expanded the idea to encompass all of Eurasia. Russia’s eight grasping tentacles extend across Europe and Asia, and on many countries they already have a firm grip. Finland, Poland, Crimea and the Balkan nations are represented as skulls, while tentacles grasp Turkey around the foot and waist, Persia about the neck and Tibet by the arm. The Trans-Siberian Railway and the South Manchuria Railway, represented by the rightmost tentacle, had by this time extended Russian influence into Manchuria as far as the valuable ice-free Russian stronghold of Port Arthur. As this map was issued in March of 1904, the struggle between Russian and Japan over control of Port Arthur was ongoing. Port Arthur was surrendered to the Japanese, who defeated the Russian Fleet in 1905, several months after this map wasprinted. 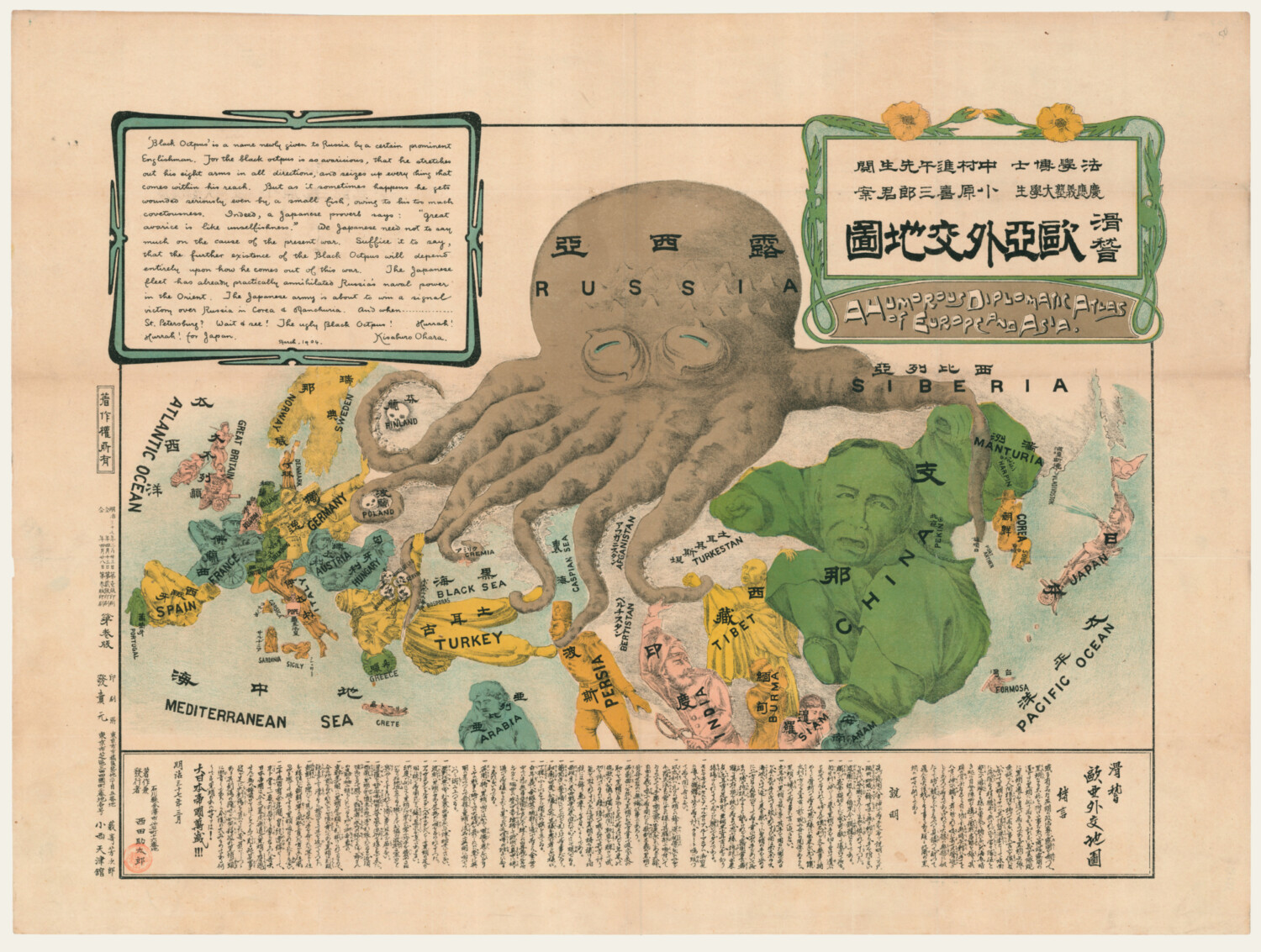 (2) Ohara, Kisahuro. A Humorous Diplomatic Atlas of Europe and Asia, 1904.

One of Rose’s most iconic maps is Angling in Troubled Waters: A Serio-Comic Map of Europe (3) showing each country depicted as an angler having various levels of success in ​‘hooking’ colonies. The fishing metaphor serves to illustrate the tensions within Europe as its global colonial control diminished and the inter-country political strife raged on intensely. England, represented by John Bull, has a huge catch-bag (Ireland), with Egypt as a crocodile on the end of his line. France is shown scuffling for control of the Third Republic between the military and civilian, their rod with an empty hook, with Napoleon looking on from Corsica. Spain watches sadly as their former catch — fish marked Cuba, Porto Rico [sic] and Philippines — is dragged away on the lines of an unseen America. The Austro-Hungarians are mourning the assassination of Empress Elisabeth by an anarchist while Turkey has a hook in ​‘the Cretan spike fish’, and a stain on his trousers is a skull marked ​‘Armenia’. And larger than all others is Russia, shown as Nicholas II with an olive branch in one hand and a line stretching to the Far East in the other. 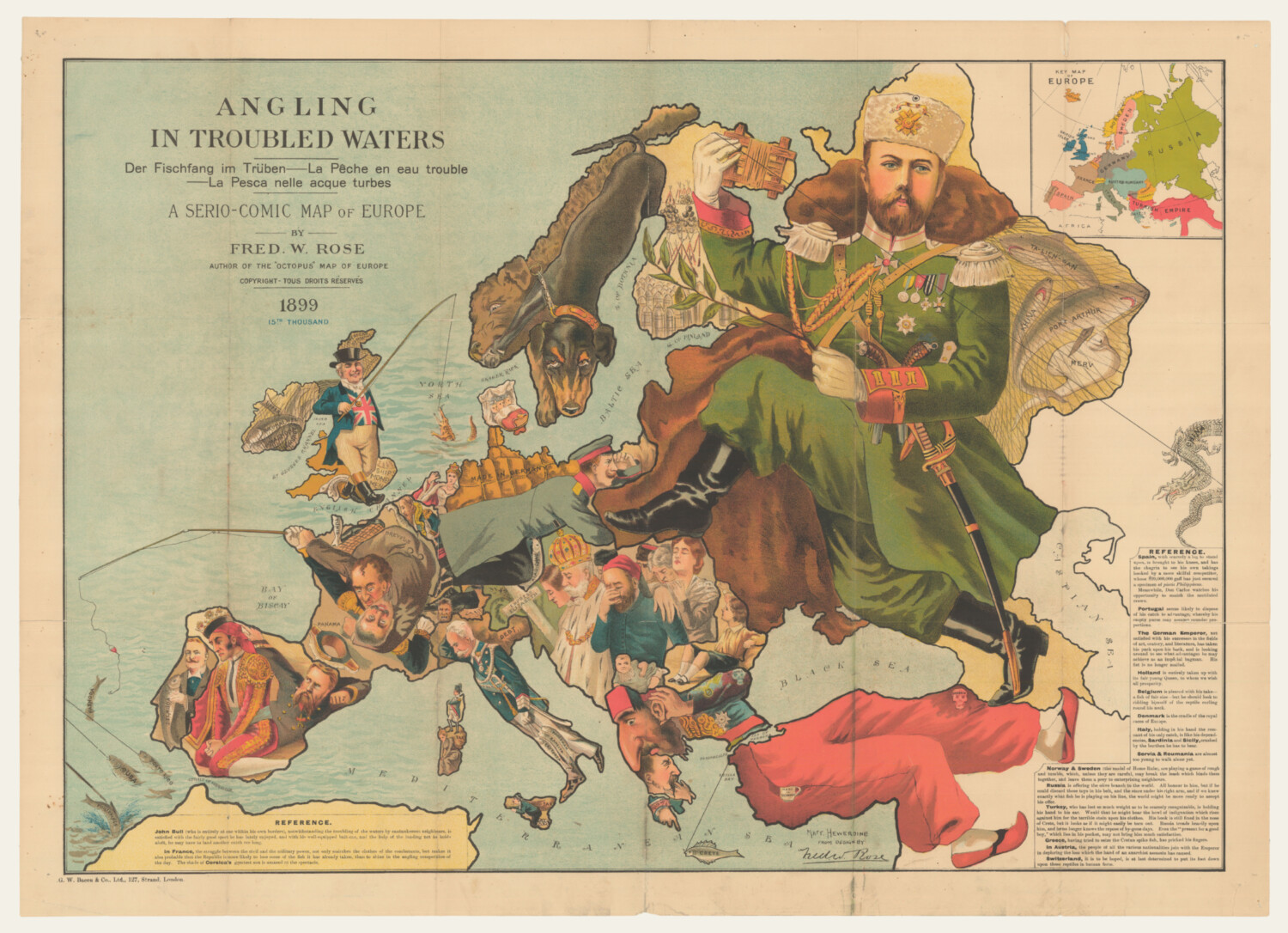 Another well known caricaturist of the time was John Henry Amschewitz (1882–1942), who turned to the arts when he was unable to enlist for the war service due to a previous injury. His 1914 map European Revue. Kill that Eagle (4) reflects the simmering tensions just before the outbreak of the Great War. Great Britain is personified by John Bull rolling up his sleeves and brandishing a cutlass. On his left, troops from Canada, Australia, India and Treland are depicted with the phrase ​‘Business as Usual written across England. To the continent Germany is represented as a swooping eagle, whose talon has grasped the French Marianne’s bayonet. Austria the clown has been knocked off his ass by the German eagle, his right hand is being stung by a Bosnian bee, and bitten by a Serbian dog, whilst the Russian Bear, aided by some charging cossacks, grabs the clown’s right foot and a German talon. The rest of the Balkans and Greece get ready to fight a reluctant Ottoman Empire, who is being pushed into war by an eager Germany. Spain and Scandinavia look on, whilst Italy sings a popular song ​‘You made me love you. I didn’t want to do it’, in reference to her involvement in the Triple Alliance with Austria and Germany. At the time of the map she was neutral; a year later she would side with Britain, France and Russia against their pre-war allies. 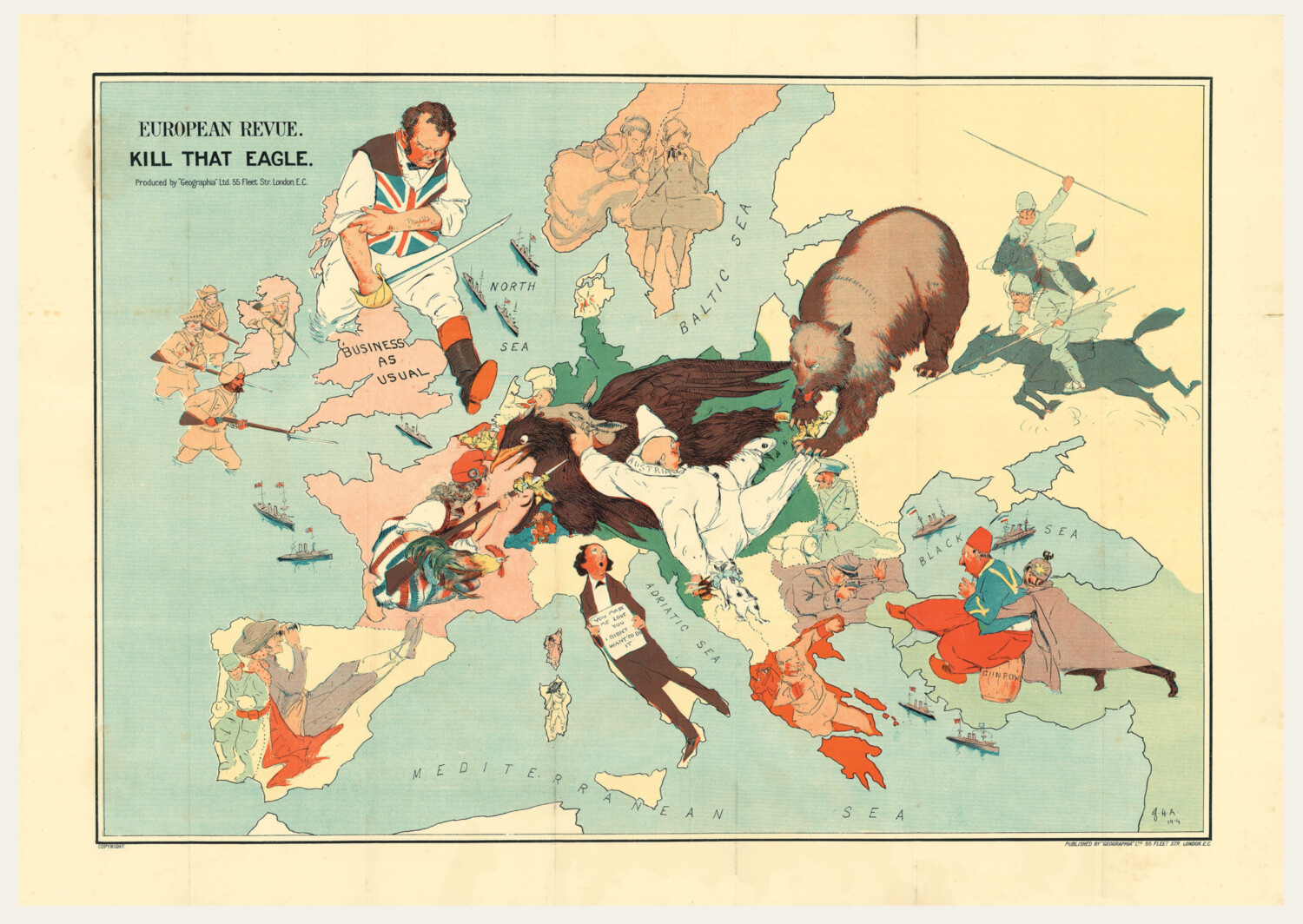 The comic map became the ideal medium to illustrate the fraught political relationships of nineteenth century Europe with an air of wry humour and wit. The maps are rich in detail and invite close inspection to tease out their nuanced meanings and commentary of contemporary international relations. Due to their ephemeral nature, serio-comic maps are very scarce today. Notable public collections of these maps in the Bodleian John Johnson Collection and in the British Library allow for in depth research on this genre and invite us to draw (not so surprising) parallels with international affairs today.