Masterpiece London describes itself as ​“the world’s leading cross-collecting fair,” which is shorthand for the fact that the fair offers everything one could want in terms of art, design, furniture and jewelry that spans the ages. You basically can furnish your house, decorate your walls and ornament your fingers, neck and wrists, all in one stop. 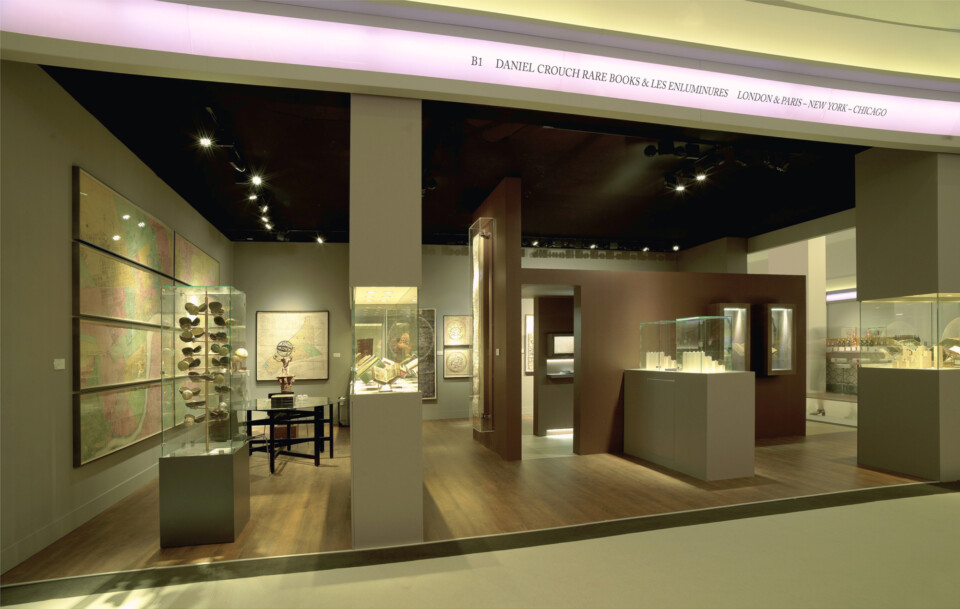 More than 160 exhibitors from around the globe show what they have to offer, making it a rare opportunity to browse some museum-quality works of art and craftsmanship, even if you’re not buying.

With that in mind, here is a list of some of the highlights of this year’s show, including some significant Impressionist, Surrealist and Modernist paintings; top new design works, as well as a tribute to Chippendale; some museum-quality statuary and other ancient objects, and Contemporary works by a star-studded lineup, including Marina Abramović, Ibrahim El Salahi, Chiharu Shiota and Rob & Nick Carter. On top of it all, there’s a magnificent shooting star that fell to earth and is now on display at Masterpiece London.

1. ​“Masterpiece Presents” — Marina Abramović’s ​“Five Stages of Maya Dance,” is the centerpiece of this year’s ​“Masterpiece Presents.” These five works, created with photography and high-tech digital technology, are essentially self-portraits carved into alabaster in relief. Seen straight ahead, you could mistake them for striking black-and-white photos, but as you move around the pieces, they mutate and transform, showing you that not all is as it seems. As the fair puts it, ​“Their hauntingly physical presence decomposes into intricately carved landscapes of alabaster as you move around the pieces.” Read more here.

2. New galleries and shooting stars — Take time to check out the offerings of first-time exhibitors like Ben Brown Fine Arts, Cahn, Cindy Chao: The Art Jewel, and Day & Faber, among others. New exhibitors like to make a big splash, whether it’s with Contemporary work or the most ancient possible: ArtAncient’s presentation will feature a rare ​“shooting star” meteorite, formed 4.6 billion years ago. On the other hand, specially commissioned Contemporary artwork will be presented at Blain|Southern with an installation by the Japanese artist Chiharu Shiota.

3. Speaking of stars — Les Enluminures and Daniel Crouch are presenting ​“A Brief History of Time: From Matins to Mars” with an exhibition of celestial maps, instruments, illuminated manuscripts and medieval and Renaissance jewelry, inviting viewers to contemplate the perception of time across history.

5. Explore the cross-collecting concept — Galleries that can take advantage of the scope of Masterpiece London make every effort to do so, combining Contemporary pieces, design objects and furniture and Old Masters and ancient works in thought-provoking ways. Some of the galleries that exemplify this ethos include Benjamin Proust, Perrin Fine Art, Robilant + Voena, and Safani Gallery and Geoffrey Diner.

7. Impressionist and Modern highlights — Landau Fine Art’s presentation will include a Picasso oil painting which hung for decades behind the desk of his only dealer, Paul Rosenberg. (Landau Fine Art was at the center of Blouin Artinfo’s preview of this year’s Masterpiece London.) Gladwell & Patterson will be bringing a late waterlilies painting by Monet and, celebrating its 90th anniversary this year, Hammer Galleries will be bringing an early work by Joan Miro along with Marc Chagall’s ​“Peintre au coq rouge.”

8. Fine furniture — In celebration of the 300-year anniversary of Thomas Chippendale’s birth, Ronald Phillips and Apter-Fredericks are showing some key pieces by the British cabinetmaker. British furniture will also be championed by Oscar Graf, whose stand will explore the theme of ​“Victorians & Edwardians,” displaying beautiful pieces in a variety of styles from 1860–1910.

9. Design stars — With a booth inspired by the Surrealist poet and patron Edward James, David Gill Gallery will be bringing together Contemporary works from their roster of artists and designers including Zaha Hadid, Michele Oka Doner and Mattia Bonetti.