The best of Masterpiece 2019 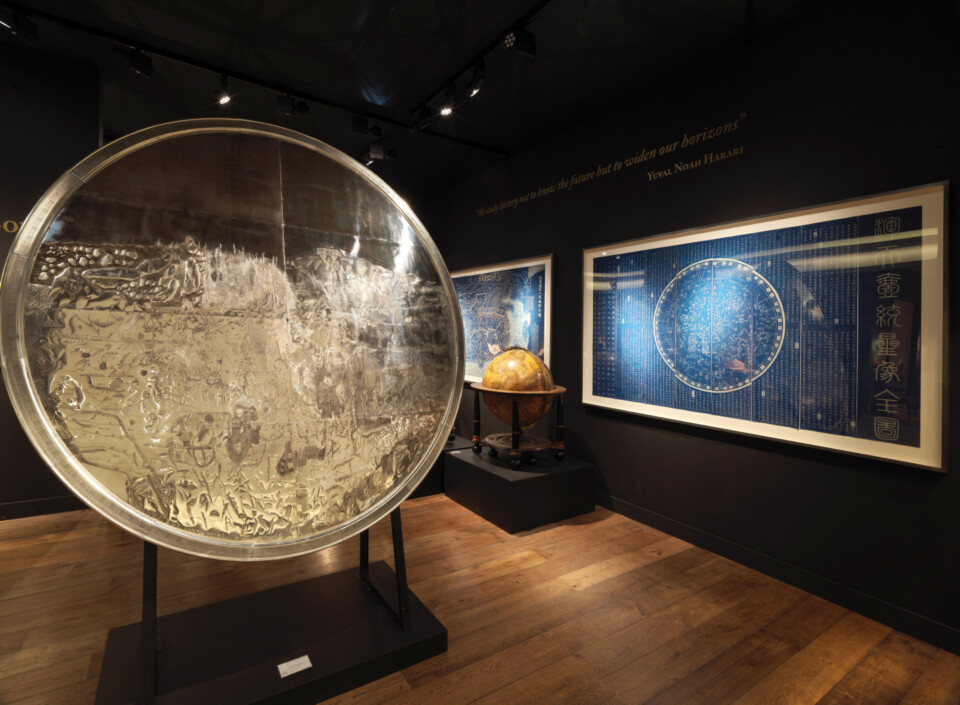 As summer begins and the mercury rises, so the UK capital’s art-world population grows, as collectors and curators arrive in the city to see what the auction houses and galleries have on offer. Now in its 10th year, Masterpiece London – the fair that prides itself on its eclecticism – is an important part of this pilgrimage.

When the fair launched in 2010, taking on the mantle of the Grosvenor House Art & Antiques Fair, much was made of its focus on luxury. The fast cars, glitzy boats and expensive wine raised eyebrows but, as the years have passed, Masterpiece has grown in size and confidence, maturing into a leading destination for international collectors looking to buy across disciplines.

This October a Masterpiece ​‘pavilion’ will appear within Fine Art Asia in Hong Kong, presenting exhibitors from the fair’s existing roster as well as new additions that are yet to be confirmed. Philip Hewat-Jaboor, chairman of Masterpiece London, has noticed a growing number of Asian buyers at the UK edition and is positive about the collaboration: ​‘It is a rapidly evolving market and there is a new cosmopolitan generation emerging, particularly in China, who are hungry to learn and to look more widely.’

In 2018, 51,000 people passed through the doors at Masterpiece London. This year, the fair will present 155 exhibitors – six fewer than last year, but with 22 new galleries in attendance covering a wide range of specialities. The US-based Old Master and Impressionist dealership Wildenstein joins the fair for the first time, as does Africa’s oldest commercial gallery, Everard Read, and several contemporary dealers including Annely Juda, Ingleby, and Marc Straus from New York.

Big-ticket artworks abound but there is also space for the less showy disciplines, such as works on paper, clocks, ceramics, books and objets d’art. ​‘Last year,’ says Hewat-Jaboor, ​‘I bought a beautiful marble fragment with a 19th-century provenance for £780.’ Photography and prints are on offer with a view to attracting entry-level purchases. This year, Sims Reed brings a group of prints by Joan Miró from the artist’s Le Marteau sans maître series, with prices starting at £8,000.

During his tenure as chairman, Hewat-Jaboor has pushed for exhibitors to display prices on their stands. ​‘This is a serious place to showcase wonderful works of art, but you have to make it easy and fun if you are going to engage with new and younger groups of collectors,’ he says. While labelling is not mandatory, it is strongly encouraged. ​‘I did get push-back when I first tried to implement this. There’s the traditional approach which says, ​“We don’t want our competitors to know how much we’re charging,” but this transparency is there for the mutual benefit of the entire fair and all our exhibitors,’ he insists. ​‘From a purely commercial point of view, labelling encourages people to buy.’ As an extension of this, exhibitors are urged not to use glass cases where possible because, as Hewat-Jaboor explains, ​‘it puts up a physical barrier as well as a mental barrier’.

In 2017, Masterpiece established a ​‘school of vetting’ open to young professionals early in their art-world careers, giving an upcoming generation the opportunity to learn from their peers. The mentees are attached to the vetting committee and free to give their opinion, but are not able to vote; the intention is that after two to three years, the ​‘vetting mentee’ will be invited to join the committee as a fully fledged voting member. The scheme continues to grow and by the end of 2018, a total of 14 mentees had experienced the process, two of whom have been promoted to full committee membership. Energising the vetting team with more youthful members is part of the fair’s strategy to stimulate a younger audience, encourage new buyers and prevent a knowledge drain, particularly in some of the more traditional sectors.

Once inside the vast, Christopher Wren-inspired marquee, visitors will walk through an installation of suspended multi-coloured pom-poms by Phyllida Barlow. Meanwhile, Jo Baring, director of the Ingram Collection, is curating a display of sculpture both inside and outside the fair, including large-scale works and those on a more domestic scale. ​‘This is about celebrating young people, new work and exciting materials,’ she says. ​‘This isn’t about creating Instagram catnip but wanting to encourage visitors to look at the sculpture as something to buy.’ Gary Hume’s American Tan VII promises to be one of the highlights of the display, and don’t miss Baring in conversation with the artist as part of the fair’s talks programme. The Royal Academy of Arts will also be hosting three talks, including one on the subject of the ​‘Artist as Collector’, featuring the artists Tom Hammick, Remi Rough, and Humphrey Ocean.

For Hewat-Jaboor, ​‘cross-collecting’ lies at the heart of Masterpiece London’s success. ​‘The mixing is incredibly important,’ he says. ​‘You may come because you want to look at fabulous jewellery but on your way there you may pass a Roman bronze and a modern British picture. We allow for serendipitous engagement with objects.’

Arguably, Masterpiece has been tracking this cross-disciplinary curve more closely than most, encouraging cross-pollination within booths. The shared stand of Patrick Bourne & Co. and Agnews will include an idiosyncratic survey of portraiture from the Renaissance to modernism. Patrick Bourne is offering John Michael Wright’s dashing portrait of the tartan-swathed highland chieftain Lord Mungo Murray (c. 1683), which has been on loan to Kelvingrove Art Gallery since 2000.

For the second year in a row Daniel Crouch Rare Books and Les Enluminures will share a stand. This time they have sought inspiration from Yuval Noah Harari’s book Sapiens: A Brief History of Humankind and will stage an exhibition around Harari’s idea that ​‘the whole of humankind has become a single network of cooperation’. Daniel Crouch will explore the theory of a ​‘single global empire’ with a pair of globes made in 1648 by the Dutch cartographer, Willem Blaeu, on sale for £1.2 million. Les Enluminures will consider Harari’s themes of genealogy, love, and death with a set of six rings that have belonged to the Earls of Galloway, a set of mourning rings, and a jewelled pendant containing relics of the saints.

Among the newcomers to the fair is Richard Saltoun, which will present a solo booth dedicated to the Italian abstract painter Bice Lazzari. ​‘Her work, which is very understated and minimal, was made with great sophistication and skill,’ says Niamh Coghlan, director of sales. This display forms part of the gallery’s 12-month-long programme of women artists but, as Coghlan is keen to stress, ​‘Take gender out of the conversation and Lazzari remains one of the masters of her medium.’

This year, Berlin-based Bastian celebrated its 30th anniversary by opening a London outpost. 2019 will also mark the gallery’s first showing at Masterpiece, with a presentation of works by Robert Rauschenberg, Cy Twombly and Andy Warhol built around the themes of beauty and horror. ​‘We would like to show how three eminent American artists went back and forth between these two extreme points,’ says gallery director Aeneas Bastian.

Also new to the fair is New York dealer in antique silver and jewellery S.J. Shrubsole, which brings a beautifully ornate pair of 18th-century silver-gilt baskets that once formed part of George III’s coronation service. And a highlight of the whole fair promises to be an exceptional rococo coffee pot by Paul de Lamerie, offered by Koopman Rare Art (price in excess of £3m).

Contemporary art continues to be well represented. Hauser & Wirth returns for a second year and Blain Southern is presenting a series of new works by the Mexican-born artist Bosco Sodi. ​‘Sodi has a tremendous international outlook and footprint,’ explains Adrian Sutton, one of the gallery’s directors, who is curating the booth. ​‘His work is the perfect reflection of London as a true international city, both for visitors and residents alike.’

Keen to expand its British and international audience, Swiss gallery Henze & Ketterer is back with a focus on German Expressionists. Among the artists on display is George Grosz, best known as a chronicler and critic of Weimar Germany who railed against war and capitalism. Grosz was also intensely preoccupied by the female nude, often using his wife Eva and her sister Lotte as models. His Self-Portrait with Nude (1937) will be on sale for CHF 530,000 alongside an oil painting by Ernst Ludwig Kirchner of his house in the Alps, which will have a price tag of CHF 3.6m.

Pimlico Road stalwart and arbiter of cross-disciplinary style, Rose Uniacke returns to the fair with a red velvet booth, central to which is a beguiling plaster sculpture attributed to the French sculptor, set designer and installation artist Janine Janet. The totem-like form, which emerges from a base adorned with four cleft hooves, is crowned with a deer’s head and encapsulates Janet’s fascination with metamorphosis.

Antiques dealer Edward Hurst, who exhibits only at Masterpiece, brings a Romano-British mosaic from the 3rd/​4th century to the fair. It is exactly the sort of object that might have influenced Janine Janet. ​‘This is an example of pure time travel,’ Hurst says. ​‘It lay buried for hundreds of years as part of the Roman villa at Dewlish, Dorset, which was first discovered in 1740 when a storm uprooted a tree revealing a mosaic.’ The site underwent further excavation from 1969–79 when an important villa complex was uncovered, including this particular fragment.

Through its variety of works and imaginative juxtapositions, both aesthetic and intellectual, Masterpiece London has played a vital role in reinvigorating and informing the 21st-century collector. Once again, the fair encourages visitors to look with an intuitive eye and to question what makes an object relevant today.

Masterpiece London takes place on the South Grounds of the Royal Hospital Chelse from 27 June–3 July.