How the filthy rich will spend their cash this Christmas

Life’s luxuries may make sense for most on your list, but there’s always one person who seems impossible to please. That’s why we’ve tossed the budget in search of the most rarefied experiences and exotic goods. 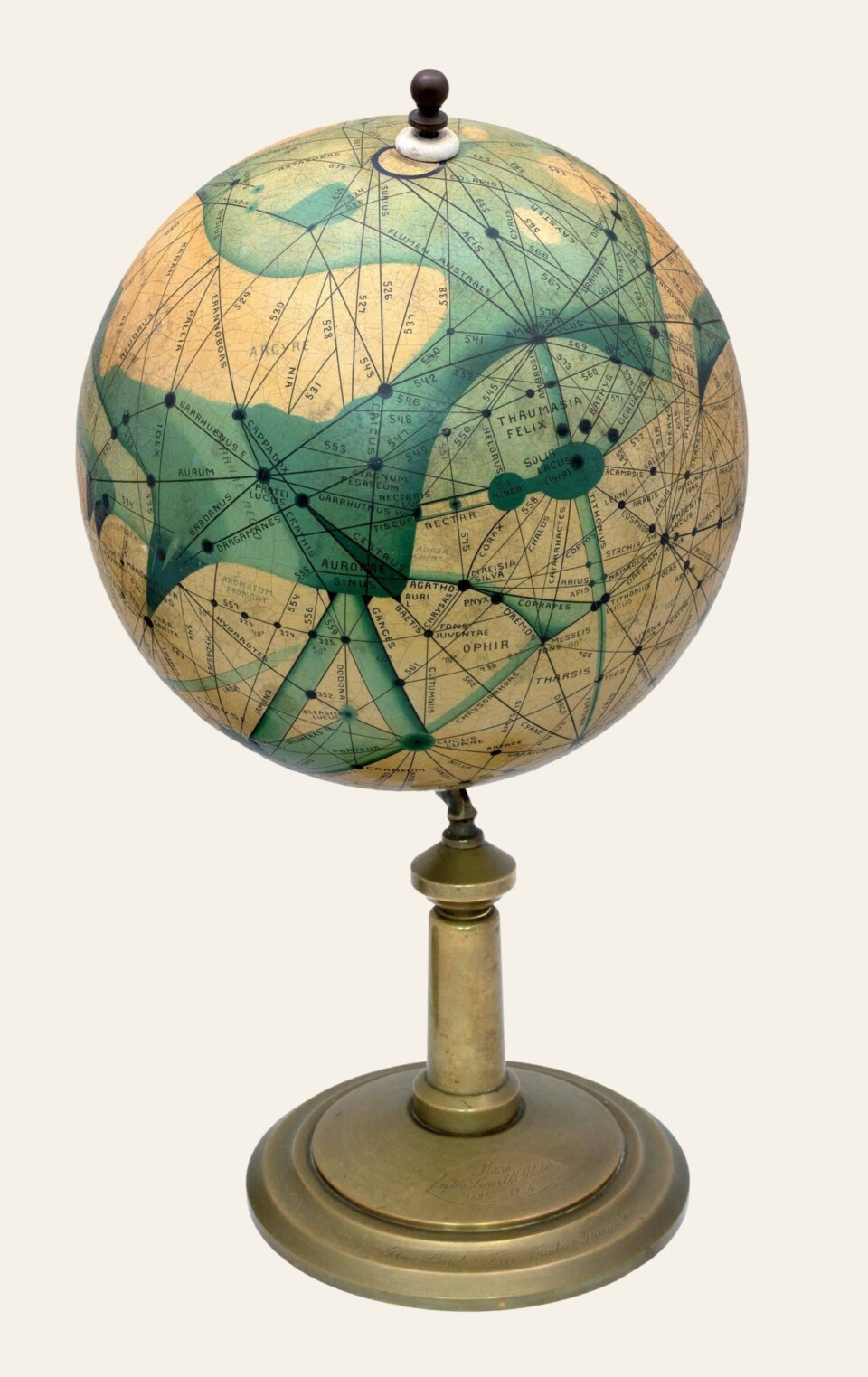 Consider these 10 items your best chance at finding the upper hand in any gift exchange.

A utopian vision of Mars

Elon Musk can’t have all the Martian fun. As the PT Barnum of Futurism whips up excitement for sending SpaceX colonists to the Red Planet by 2024 (and shooting his midnight-cherry Tesla Roadster into orbit), your billionaire can take a more contemplative approach with a historic globe that imagines what life is like out there: ​“Mars efter Lowell’s Glober 1894–1914.”

The hand-inked and ‑coloured manuscript orb was made by Emmy Ingeborg Brun, a Danish socialist and astronomer, from mistranslated drawings by Giovanni Schiaparelli that interpreted ​“canali” (natural channels) as man-made canals, evidence of a now-dying Martian population.

In those lines, Brun saw evidence of a cooperative society and promoted Mars as a potential site for a socialist Utopia (not so unlike today’s space race). To spread the gospel, she started sending copies of the globe to museums and academic institutions around the world; only eight, including this one, have endured.

The varnished, papier mache globe comes on a bronze base inscribed with the words ​“Free Land. Free Trade. Free Men.” and would make a handsome mantelpiece to any earthbound corner office.

An expedition to the North Pole

Naughty or nice is beside the point when you can skip the letter to Santa and go straight to the source instead. For those short on time, there’s a three-day helicopter flyover from $28,000 ($37,000); for those long on insanity, the North Pole Marathon will take place on April 9, 2018. Entry fee: £16,000 pounds ($28,349). For everyone else, Quark Expeditions offers two-week, all-inclusive trips aboard a Russian, nuclear-powered icebreaker to the geographic North Pole.

What to expect? Blissful days unplugged from the internet, 24-hour sunshine, the surreal seascapes of Franz Josef Land, an occasional, helicopter-bourne scouting mission, and the chance to spot polar bears, walruses, seals, and narwhals.

Sure, accommodations aren’t luxe (book the Arktika Suite and a massage in the sauna), but that’s kind of the point: to walk away feeling less like a tourist and more like an accomplished adventurer. It’s one thing to say you’re on top of the world, but fewer than 500 people annually can claim literally to have been there.

Animal conservation is a delicate dance that can be a victim of its own success: too many elephants or rhinos in one area, and they eat all the plants; a juvenile lion kicked out of the pride is going to have a rough ​‘n’ bloody bachelor life unless he has space to roam. Luckily, this is a problem money most definitely solves.

Charity Travel services travellers yearning to go beyond Africa’s traditional twice-daily game drives by matching them with conservation organisations (Wildlife ACT, African Parks) in need of funding to move endangered species out of overpopulated game reserves. Nobody is going to move a lion because a billionaire says so, but with enough notice (ideally a year) and mother nature’s blessing, guests can help out, getting up-close-and-personal with the sleeping beastie while snagging a supreme selfie in the process. Rhino de-horning and wild dog collaring expeditions are also available-often times on the same trip.

A Watch Worn by a Legend

Unless you’re the anonymous bidder who bought Paul Newman’s actual Paul Newman Daytona Rolex for $17.8 million ($24.6 million), Christie’s has a few choice lots left in their Evening of Exceptional Watches. For men, nothing says swagger quite like Joe DiMaggio’s Patek Philippe ref. 130. The baseball legend acquired the 33mm, 18-carat gold chronograph in 1948, and it’s still in fantastic condition, from its silvered, Breguet numerals on down to the original leather strap that was worn around DiMaggio’s wrist.

The ladies in your life are equally well-served in this auction. There’s a diamond-encrusted Gruen that belonged to jazz singer Billie Holiday during a pivotal moment of her career headlining Cafe Society. An inscription reads ​“To Billie From David, 1938” on the back of the 11mm case, although who David is remains a mystery. Also bearing an inscription is a Cresarrow silver travel watch with gold numerals and Tiffany & Co. logo on a cream dial. British aviator Amy Johnson gave it to Amelia Earhart circa 1932 after her history-making solo flight across the Atlantic Ocean. ​“To Amelia, In Sincere Admiration, Amy” it reads. No doubt the sentiment transfers to whoever might be the recipient today.

What’s harder: becoming an Olympic athlete or becoming a billionaire? Tough to say, but certainly the former is more difficult without the latter, as American athletes competing their way up the ladder receive no federal funding for training or coaching (unlike most of the rest of the world). They need corporate and individual sponsors to make medals happen.

In that light, the Champions Club trip to the 2018 Olympic Winter Games in PyeongChang, South Korea, is a feel-good gift for the super-rich ski and snowboard patriots in your life. In return for their support of the U.S. team, they’ll be ensconced in white-glove luxury (from meals to hotels), provided VIP credentials, and invited to private victory celebrations with American athletes just hours after they step off the podium seems almost beside the point. Two possible waves keep the trip intimate: Feb. 8–17 includes the opening ceremonies; Feb. 17–26 wraps the Games up.

Billionaires aren’t immune to ennui. After popping the umpteenth bottle of bubbly in the Jacuzzi, sailing up and down the Cote d’Azur can get so typical. That is until they take their Aston Martin submarine for a spin. Codenamed ​“Project Neptune,” the three-person vehicle is a collaboration with Florida-based Triton Submarines, a leader in luxury submersibles. Silver, blade-like pontoons give it a silhouette a Bond villain can appreciate, while the air-conditioned acrylic bubble of a cabin allows unfettered views of their underwater domain down to 1650 feet (503 metres). The 5.9‑foot (1.8 metres) tall sub weighs just over 4 tons and can cruise at 3 knots, or 3.5 miles (5.6km) an hour. Deliveries start next year.

Their Name in Lights

Nothing says ​“I’ve made it” quite like ten figures in the bank-although having your billionaire’s name emblazoned on the side of their local baseball stadium certainly states the case. Right now the home parks for the Washington Nationals, Miami Marlins, and Seattle Mariners are all up for grabs, while the Los Angeles Dodgers are soliciting offers for just the grass and dirt of its field. Terms can run in the decades and cost millions. The Mariners, for instance, are seeking upwards of $5 million ($6.6 million) per season, so you may want to double-check their fan bonafides first.

Less controversial-barring any billionaire in-fighting-is to sponsor a collection or exhibit in the American Museum of Natural History in New York. Starting at $500,000 ($662,014) on up to $75 million ($99.3 million) based on location, size, and visibility, the Philadelphia Museum of Art offers prime opportunities for shouting a permanent ​“Adrian!” with naming rights to specific galleries in its landmark building; endowments to name staff positions begin at $750,000 ($993,022).

A Private Island for the Apocalypse

In an uncertain world, everybody could use a good escape plan. And if a $14 million ($18.5 million) bunker-ready home in Atlanta stocked with buckets of dehydrated chili mac and post-apocalyptic stir-fry is a bit too close to home, there’s always New Zealand. The isolated South Pacific nation is already a popular bolthole for the mega rich to hedge their bets should the U.S. or Europe start to go belly-up-Jack Ma, Peter Thiel, Alexander Ambramov, and hedge-fund pioneer Julian Robertson have all reportedly put down for multi-million dollar hideaways in the kiwi countryside.

But for your billionaire, only the best: a 59-acre private island in the Hauraki Gulf, just a 15-minute helicopter ride from Auckland. The facilities that remain from Pakatoa’s previous life as a holiday resort (1965–2000) may be ​‘extremely tired,’ but there’s a certain vintage, Lost-like appeal to the whole complex: tennis courts, a bowling green, nine-hole golf course, solarium, and swimming pool plus enough out-buildings to have space enough for the extended clan. The temperate, sunny weather in this region of the North Island makes for prime yachting, too, with a deep-water dock at the ready.

Cost: $24 million, ($31.8 million) and buyers could qualify for New Zealand residency as well.

Time may be the ultimate luxury-something to be savoured once you’ve achieved major success – but you’d never know it in today’s endless pursuit of the shortest sprint times, highest top speed, and most extreme seven-figure supercars. A vintage Ferrari, counterintuitively, may be just the ticket to remind your billionaire to slow it down.

On sale at RM Sotheby’s Icons auction in Manhattan, this 1961 Ferrari 250 GT Cabriolet Series II (chassis 3009 GT) by acclaimed designer Pininfarina is the epitome of a classic touring Ferrari. Its luscious curves and high-revving, vociferous V12 don’t mind making themselves known, but they also nod towards a more languorous life, saying ​“I’ve got this” to whatever may be round the bend. Fully restored with dark Grigio Ortello paint and tan leather interior, and with only 600 miles since, it’s a concours-or rally-ready addition to any blue-chip collection.

Their Very Own Cask of Scotch

Don’t get us wrong, a four-figure bottle of booze is a nice gesture. But 600-some bottles of the stuff? Not even your snobbiest of Scotch friends should scoff at that. With offices in Edinburgh and Singapore, Cask 88 sources a selection of primary- and secondary-market casks from brand-name distilleries (The Macallan, Dalmore, Bowmore, Laphroaig) as well as since-closed producers with cult cachet (Rosebank, Port Ellen) to sell as alternative assets or passion projects.

Each cask is unique and samples are available: Does she like the heathery spice of the Highlands, the smooth approachability of the Lowland style, fruit notes in a Speyside single malt, or an Islay peat bomb? All casks are stored in bonded warehouses, often at the original distillery, and that’s when the fun ​“begins” – the Cask 88 team provides expert guidance on maturation (including re-casking to a new finish), advises when it’s time to bottle (or sell), designs bespoke packaging, and can even arrange visits to their ​‘Precious’ throughout the years.