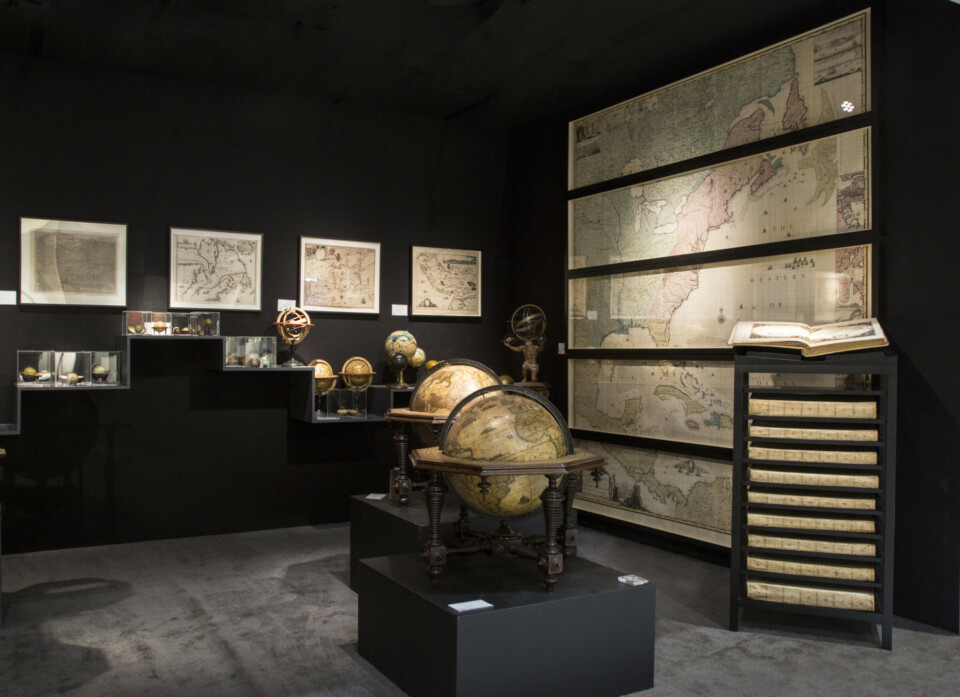 As always, there is a lot to see in the city.

Each week, we search New York City for the most exciting and thought-provoking shows, screenings, and events. See them below.

Sotheby’s celebrates its Americana Week auctions with a series of talks on topics including silver, ceramics, folk art, and needlework. Get there early for a lecture by Arun K. Singh, an emeritus professor of surgery at Brown University’s Alpert Medical School, about ​“an immigrant’s remarkable journey to become a preeminent heart surgeon and avid Americana collector.”

Tuesday January 21—Sunday, May 17
2. ​“Daiga Grantina: What Eats Around Itself” at the New Museum

This New Museum presentation is the artist’s first solo US show and includes a site-specific sculptural installation suspended from wooden planks. The work, titled What Eats Around Itself, mimics the growth of lichen, which typically develops into crusty, leaflike, or branching formations. The sculpture’s amorphous structure appears to be growing and decomposing all at once, much as lichen reproduces and consumes its own biological matter.

Tuesday, January 21–Monday, January 26
3. ​“Meet the Chicago 400: Lessons in the Carceral State” at the Drawing Center

For its third annual Winter Term, ​“an initiative that investigates drawing as a tool for addressing inequity and encouraging social change,” the Drawing Center is working with the Chicago 400, a group of formerly incarcerated Chicagoans who are experiencing homelessness, and work with artist and policy advocate Laurie Jo Reynolds. The group meets weekly to make drawings and illustrated diagrams about the difficulties they face in the hopes of passing legislation that would improve their situation.

Abstract painter Jackie Saccoccio has two shows this opening week: uptown at Van Doren Waxter and downtown at Clara Ha’s new venture, CHART, in Tribeca. Saccoccio’s physically demanding works are made when the artist drags and shakes paint over her canvases until they are entirely covered.

Among the many little notes that Duchamp stuffed into his Green Box is one about what the artist calls ​“musical sculpture”: ​“Sounds lasting and leaving from different places and forming a sounding sculpture which lasts.” The quote has been borrowed and slightly modified for the title of a new show at Luxembourg & Dayan that brings together an impressive cadre of artists from the early 20th century to today (Joseph Beuys, David Hammons, Marina Abramović, Derrick Adams) who have pushed at the limits of Duchamp’s definition.

From the ashes of the late New York Ceramics and Glass Fair rises the New York Antique Ceramics Fair, featuring a smaller selection of the same galleries, such as Garry Atkins, a London dealer specializing in English pottery, and Samuel Herrup Antiques of Sheffield, Massachusetts, which deals in American redware and stoneware.

Reimagining femininity as a source of power and community rather than frivolity, this spirited exhibition, curated by Marley C. Smit, brings together a group of artists whose works joyfully embrace the aesthetic. The show includes soft-sculpture fabric guns by Natalie Baxter, baroque-inspired digital collages by Anna Cone, and Jen Dwyer’s ceramics, which reimagine age-old fairy tales and objects of girlhood.

Many New Yorkers have probably encountered the late Italian sculptor Costantino Nivola’s 17 monumental public artworks in the city without knowing who made them. A new exhibition of this under-recognized artist’s work at the Cooper Union School of Architecture highlights a large number of these public works—including sculptural installations, bas-reliefs, and paintings—which Nivola often made in collaboration with some of the era’s leading architects, such as Jose Luis Sert, Eero Saarinen, and Marcel Breuer. This show offers an overdue opportunity to rediscover Nivola, who fled fascist Italy for the US in 1939 and soon found himself in the circles of Willem de Kooning, Jackson Pollock, and other New York School artists, all the while innovating his own style and techniques that drew on the ancient art of his native Sardinia.

As museum workers across the country form unions at a record pace, POWArts is presenting a panel that offers museum professionals and anyone else interested in the trend a primer on what’s driving this shift and what workers need to understand in order to navigate this changing professional landscape. Moderated by Artnet News’s own executive editor, Julia Halperin, the panel will include Kaitlyn Chandler, a video editor at the Brooklyn Academy of Music and a delegate for BAM’s union; Maria Marchenkova, a senior assistant editor for MoMA and a union delegate; Maida Rosenstein, president of UAW Local 2110, a union that represents many museum workers; and Dana Lossia, a partner at law firm Levy Ratner.

More than two decades ago, Claudia Hart created an irreverently insightful illustrated adaptation of Niccoló Machiavelli’s The Prince, the infamous Renaissance-era treatise on how to gain and keep power, for a pint-sized audience. The be-careful-what-you-wish-for implications were clear: If we’re going to accept a politics this brutal and calculated, shouldn’t we start preparing our children early? First produced as a small catalog and expanded into a series of oil paintings, ​“A Child’s Machiavelli” was released as an expanded hardcover by specialty publisher Beatrice Books in 1998. This week’s pop-up exhibition at bitforms includes the original oil paintings and offers copies of the freshly rereleased book for the little monsters in your life.

Inspired by a spate of recent exhibitions revisiting the Pattern and Decoration movement of the 1970s and ​’80s, curator Amie Cunat has put together a group show featuring works by Beverly Acha, Elizabeth Corkery, Gail Fitzgerald, and Justine Hill, among others. ​“Fanfare” considers the many ways in which pattern, sometimes dismissed as purely decorative, can be employed toward sophisticated ends. The catalogue is co-authored by Artnet News’s Sarah Cascone.

Antiques enthusiasts! Here’s one more to add to the docket. Now in its fifth edition, this fair is an eclectic mix of everything from estate jewelry, Oriental furniture, rare books, and rugs. Run by husband-and-wife duo Brad and Vandy Reh, the fair has an intimate boutique feel.

Author and longtime Vanity Fair contributor Michael Shnayerson will be speaking at the National Arts Club about his recent book, Boom: Mad Money, Mega Dealers, and the Rise of Contemporary Art, which bursts with dishy details about the biggest names in the industry: Larry Gagosian, David Zwirner, Takashi Murakami, Arne Glimcher, Damien Hirst, and many more.

Through Saturday, January 25
14. ​“Anna Walinska: Return to the Riverside” at the Master Gallery

Anna Walinkska (1906–1997), born in London and raised in New York, made some 2,000 works of art during her lifetime, many of them at the Master Building, the Art Deco skyscraper on Riverside Drive where she was an artist in residence from 1955 to 1971. There, she taught at the building’s Master’s Institute and exhibited at its Riverside Museum (now home to the Master Gallery) alongside such luminaries as Louise Nevelson, Milton Avery, Jasper Johns, Barnett Newman, and Alice Neel. Today known as the Master Apartments, the building is celebrating its 90th anniversary with an exhibition of Walinska’s work, including drawings, paintings, and collages.

Art House Productions, the Jersey City visual and performance art center, hosts its annual Snow Ball Gala with a Wizard of Oz theme this year, with a costume contest and live music from local band Forget the Whale. This year’s artist honoree is Miguel Cardenas.

The Winter Show, now in its 66th year, this year includes 72 fine and decorative arts dealers showing objects made across 5,000 years of history. The fair will present jewelry, antiques, arms, and includes a special presentation by Daniel Crouch Rare Books of 50 terrestrial and celestial globes from the 16th through 20th centuries.

Founded in 2006 by Margot Gordon and Crispian Riley-Smith, Masters Drawings New York returns this weekend for its 15th edition. Twenty-five galleries along Madison Avenue and up through the Upper East Side will open their doors for a weeklong celebration of drawings by both Old Masters and contemporary artists.

Swoon, known for her intricate, life-size wheatpaste prints and paper cutouts, has reunited with art dealer Jeffrey Deitch, who staged a star-making show for the street artist way back in 2005. She’s presenting recent drawings and installations, as well as films incorporating stop-motion animation.

Through Sunday, February 9
20. ​“The Art of Rube Goldberg” at the Queens Museum

You may know the name Rube Goldberg from his namesake Rube Goldberg machines, impossibly complicated devices that perform basic tasks—but Goldberg didn’t draw them, he drew them. This traveling show, which spans the entirety of the Pulitzer Prize-winning cartoonist’s 72-year career, has been touring the US since February 2017. From his political cartoons addressing contentious issues such Arab-Jewish relations to his delightfully sarcastic ​“Foolish Questions” newspaper comic series, it’s well worth a look before it closes here in New York.