Daniel Crouch Rare Books of 4 Bury Street, St. James, London has recently opened a shop in New York at 24 East 64th Street. The firm is a specialist in antique atlases, maps, plans, sea charts and voyages dating from the fifteenth to the nineteenth centuries, and is a partnership founded by Daniel Crouch and Nick Trimming. 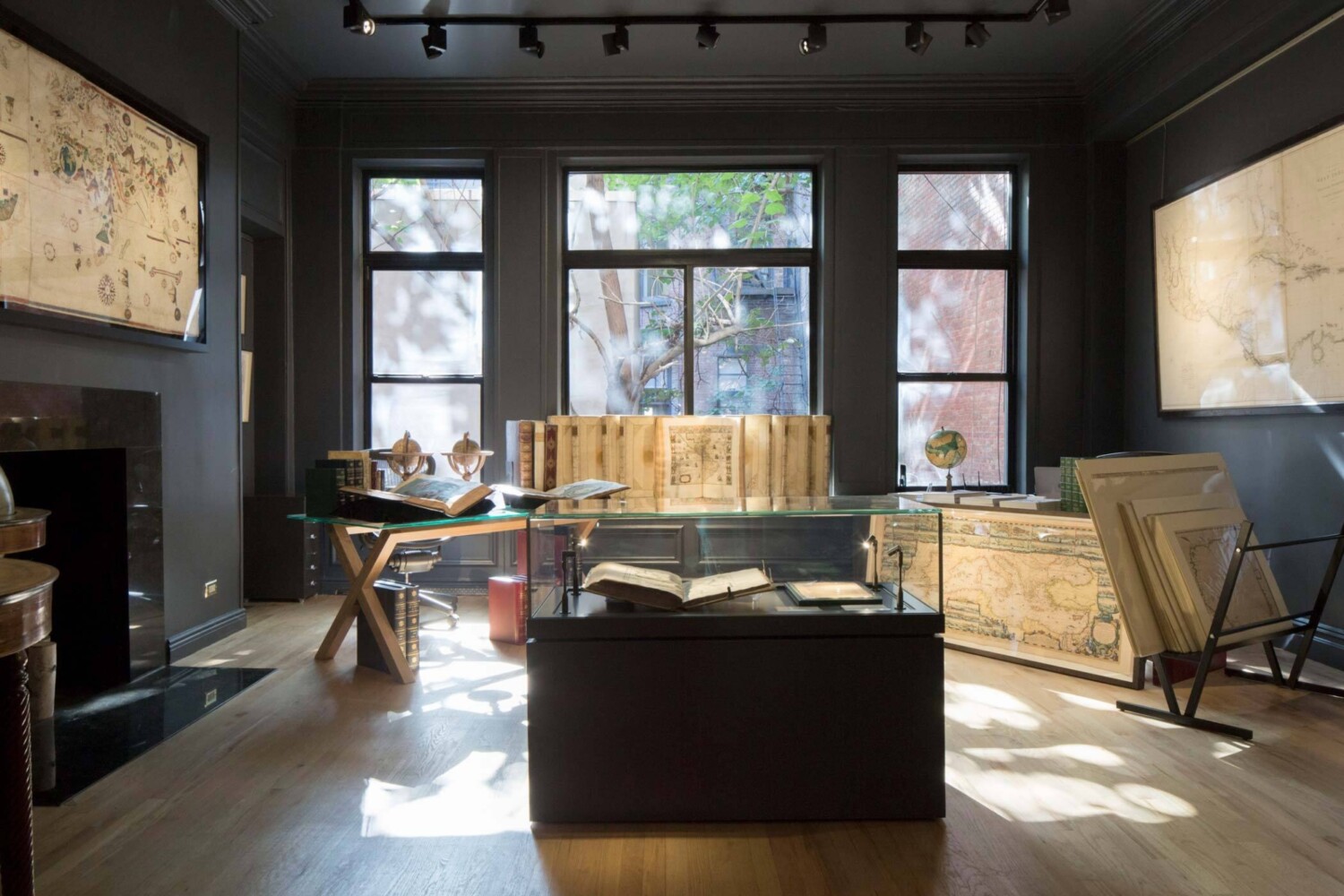 It is encouraging that a highly-respected dealer in the field is opening in New York, as the trend has long been established that shops in the Books, Manuscript, Map and Ephemera categories are closing. Two, possibly three, trends are transforming the thinking.

The upper end of the market remains strong and wealth remains, and is expected to remain, very strong among the collecting community in the western world. But the Crouch firm, as an English company, faces a changing economic environment following the national vote for Brexit. No one seems entirely sure how the United Kingdom will be affected, perhaps for the better and perhaps not. On the American side though there is palpable belief that the Trump era will see the wealthy become wealthier, thus further enabling them to pursue their bibliographic dreams. This gives the Crouch decision to open in New York as Trump takes power and Prime Minister Theresa May of the United Kingdom lays out her exit strategy, a thread the needle feeling and seems a very solid strategy.

New York, now decades past its bibliographic peak in the 1920s, remains the center of book-collecting, as the world’s wealthiest find themselves preferring to live in and in close proximity to New York. Voila. DCRB is in London and now New York. The next question may be; when will they open in Paris or Shanghai?

The Crouch approach is based on the application of very sophisticated knowledge applied to rare to impossibly rare exceptional examples.

The New York location will be open weekdays 10–6 and weekends by appointment. Kate Hunter and Noah Goldrach will be the everyday faces of the fresh endeavor. Daniel and Nick will be found on both sides of the Atlantic depending on the shows where the firm will be exhibiting.

They are members of the following trade associations: The Antiquarian Bookseller’s Association [ABA]; The British Antique Dealers’ Association [BADA]; Confederation Internationale des Negociants en Oeuvre d’Art [CINOA]; The International League of Antiquarian Booksellers [ILAB]; The Society of London Art Dealers [SLAD]; and The European Fine Art Foundation [TEFAF]. Both Daniel and Nick are also both members of The Company of Art Scholars, Dealers, and Collectors.

So I asked Daniel for his view of the future of the field and the increasing importance of exceptional examples of the best books. Here is what he has to say:

We specialize in maps, atlases, voyages and globes because that’s what interests us. We have resisted the temptation to expand beyond this into new areas because we believe it is our enthusiasm for, and knowledge of, the subject that our customers like. The slight exception to this is in the area of scientific instruments and celestial navigation – I’m fascinated by the ​“problem of cartography” (how to express a spherical globe onto a plane) and this interest led me to learn more about how maps are made, and the instruments used, and so we have extended into this area a bit over the years. If you want to define our area of specialization it is this: we sell objects that answer the question ​“where am I?” in terms of both space and time.

We believe that the future is bright for maps and atlases for three main reasons:

1. People’s awareness of ​“place” has increased over the years. We travel more, emigrate more, and encounter a greater number of maps than ever before. Think about it: how many maps do you see in a day on your smartphone? Every shop, restaurant, or news item is accompanied by a bit of cartography. This familiarity makes maps very accessible and personal. It’s really very easy to sell someone a map if it has their house on it!
2. Cartography seems to have avoided the ​“brown furniture” problem. There is no doubt that people’s decorating tastes have changed. This has impacted negatively on many ​“traditional” antique dealers, and even book collecting suffers a bit from this – a lot of people don’t want cluttered bookshelves in their Starkitect home! Maps avoid this problem with their graphic clarity and suitability for display in contemporary picture frames. We made a decision about 6 years ago to stop using ​“antique” style frames and we’ve never looked back. In fact, I don’t remember the last time anyone asked me for a gilt frame.
3. You are correct that we tend to concentrate on exceptional examples of the best books. This is because the rare book market has split in two. One part dealing in ​“books as objects” that are, for want of a better word, ​“trophies” for the 0.1%, and the other part in ​“books as collectibles” with a natural home on the internet. Most maps and atlases fall into the former category and, as it is very visually appealing, has a natural home in the fine art world as well as the book-collecting world. We find many more new collectors at fine art fairs than we do at book fairs.

The main challenge for modern book dealing – more, in my opinion, than finding great material — is finding new customers. The Internet is amazing if one knows what one wants, but it’s rubbish for giving people ​“the collecting bug”. We believe people have to see and touch works to appreciate and learn about them, which is why we have shops and exhibit at art fairs. The fairs are as important, if not more important, than the shops as I think, to a certain extent, collectors are hard-wired that way and almost can’t help themselves – it is, therefore, considerably easier to convert customers already interested in the arts than it is to convert a total neophyte.

It is no coincidence that we signed the lease on the New York shop the day after the Brexit vote, but that had less to do with the decision than the fact that there are few young dealers in New York, and in 5–10 years there could have been nowhere in this city to see maps and atlases out of captivity.

I am hopeful that recent political follies on both sides of the Atlantic are the death rattle of the last generation of protectionist nationalists, and not precursors of some dark future. I’m optimistic that technology and international free market trade are far stronger forces than the odd electoral disaster. Old maps and atlases help to reinforce this view – borders and nations are human constructs and move. The trend over time has been one towards expansion and inclusion, and driven more by economics than the myth of nation.