In 1931, the same year Al Capone was finally locked up, a new map of Chicago was made. 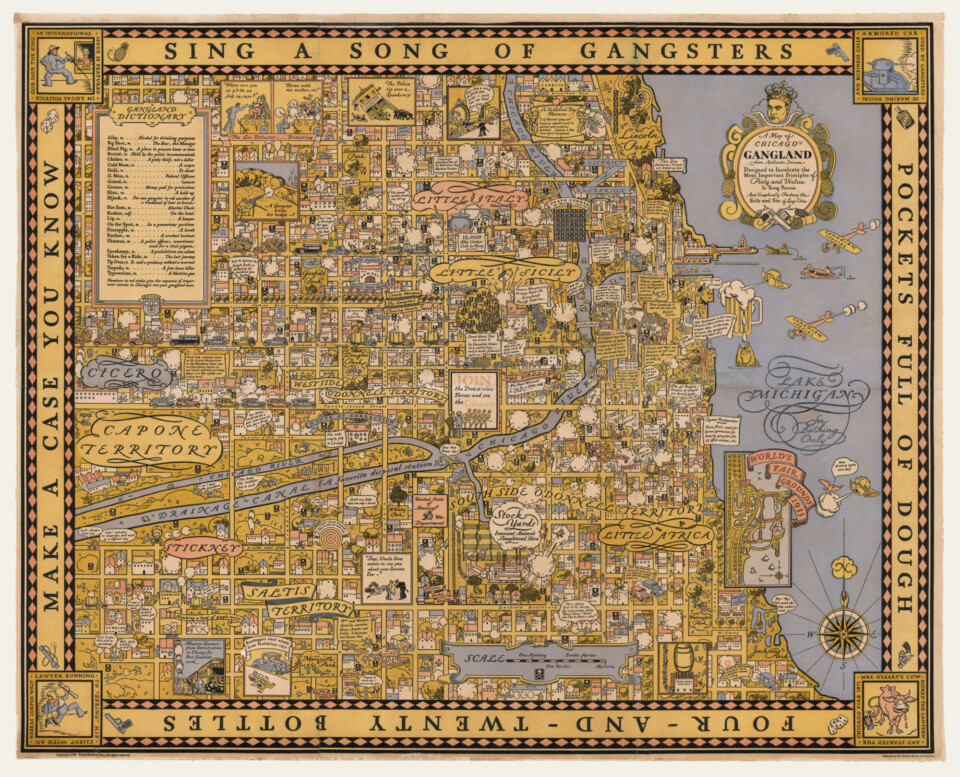 The map wasn’t geographically accurate and certainly was not approved by the city. But it did its best to chart Chicago’s chiselers, big shots and ​“cold meat” — slang for ​“a corpse,” according to the map — with gallows humor and whimsy. While ​“Scarface” sat in prison, a cartoon version of his crowned head sat atop the map’s cartouche.

Titled ​“A Map of Chicago’s Gangland from Authentic Sources,” the guide to Chicago mobsters was ​“Designed to Inculcate the Most Important Principles of Piety and Virtue in Young Persons and Graphically Portray the Evils and Sin of Large Cities.”

Now, the map could be yours. But if you want the real thing, rather than a $20 reproduction, you might need to plan an old-fashioned heist to afford it — it goes on sale in London next month for 20,000 pounds, about $26,500.

Although there are copies of the map at Chicago’s Newberry Library, as well as the University of Illinois at Urbana-Champaign, the print for sale is from Daniel Crouch Rare Books, a New York-and London-based dealer specializing in antique atlases, prints and maps. It will be on sale at the June 9 and 10 London Map Fair.

Crouch tells the Tribune he’ll be sad to see the chromolithographed print go.

“It’s a map that I’ve always lusted after,” he says. ​“It’s a combination of a good story and a great work of art.”

The map is a rare find, according to Crouch. He says most copies were destroyed before the 1933 Century of Progress World’s Fair.

“They were rather worried it was not painting the picture of Chicago they wanted,” he says.

James Akerman, Curator of Maps for the Newberry Library, says he’s never heard that story. But, he says, ​“It’s kind of hard to not look at this map and step back and say, is this really the image of Chicago you want to be promoting?”

Believed to have been inspired by the design of MacDonald Gill’s 1913 ​“Wonderground” map of London, depicting London’s subway system, ​“Gangland” takes a playful approach to the murders and massacres of Prohibition-era Chicago, with pops of color and pint-size criminals. The map circulated as Chicago’s mobster image was magnified in Hollywood gangster films and sensational newspaper stories.

But the map itself doesn’t take its cues from fictional movies. A number of real-life atrocities committed during the reign of Capone and the gang wars of the 1920s are depicted with comic strip-style cartoons. There are nods to the St. Valentine’s Day Massacre and the murders of Joseph Aiello and ​“Big Jim” Colosimo ‑Capone rivals.

The Gennas — once rivals of the Outfit — have their place on the map and their ally, South Side mobster ​“Diamond Joe” Esposito gets a shoutout. In one comer, bootleggers steal wheels and a lawyer runs to ​“spring” his client.

And yet, the map is not entirely accurate, according to University of Illinois at Chicago Professor Emeritus John Binder — an expert on the history of organized crime.

Gangs are in the wrong territories, territories are mislabeled and despite a label saying the Chicago Sanitary & Ship Canal was a ​“favorite” place to dispose of them, there are few recorded instances of bodies being dumped in the river during the era of the map, says Binder.

They’re showing the West Side O’Donnell gang as being around Douglas Park. That was controlled by the Valley gang,” says Binder.

Aside from the historical inaccuracies, Binder says the information in the map isn’t that obscure.

“A lot of it is kind of standard stuff,” he says.” Although I think they really messed up on ​‘blind pig’ ” — one of the entries in the map’s Gangland Dictionary. The map says the term means ​“a place to procure booze or beer.” Binder says it means an unlicensed saloon.

For fans of the map, the artistic liberties taken with history are just part of its charm — and may add to its value. A few decades ago, the map wouldn’t have been viewed as more than a piece of ephemera, ​“Whereas now people are really starting to appreciate it,” says Crouch.

Whatever its historic value, no one seems to know who to credit for the crook cartography.

The map is attributed to a Bruce-Roberts Inc., but Crouch and Akerman have no indication as to who the designer was.

In the Newberry’s copy, an envelope was included with cheeky press comments from its creators.

One of them reads: ​“the first opportunity Chicago has had to see it and we understand the artists were chased out of town.”