10 Fantastic Finds from Jewelry to Painting at TEFAF Maastricht 2019

From the Nizam diamond to a carriage for the King of Spain, here are 10 delightful discoveries from the fair 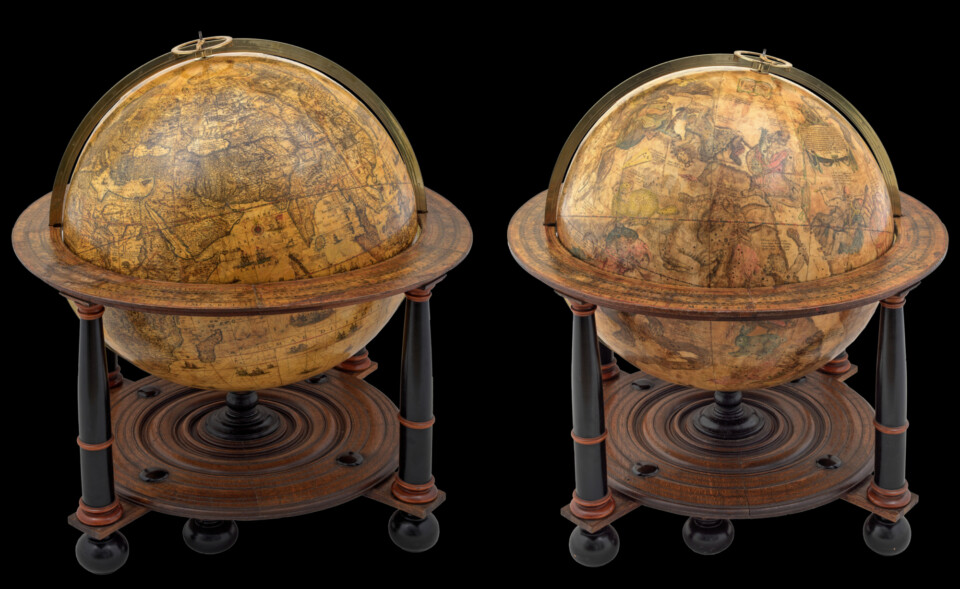 Every March, the most important museum directors, private collectors, and designers from around the globe flock to the picturesque Dutch city of Maastricht for the European Fine Art Fair (TEFAF), the world’s leading art and antiques showcase. For ten days, a 100,000-square-foot convention center is transformed into a larger-than-life wunderkammer where historic artifacts from Mesopotamia and Dutch Old Masters mingle with midcentury modern design pieces and rare books—all of extraordinary quality.

At this year’s gathering, now on display through March 24, there are 276 exhibitors presenting some 35,000 objects spanning a staggering 7,000 years of art history. Akin to an encyclopedic museum, the works are classified into categories including Antiques, Paintings, Modern, Design, Paper, Tribal Art, and La Haute Joaillerie.

Galleries are known to bring their best wares to Maastricht, and before the opening day, each piece is rigorously vetted by an independent team of industry experts who check the quality, provenance, and historical significance—a process that certainly adds to the fair’s international gravitas.

Meandering the aisles of curated booths is inspiring, fascinating, and oftentimes dizzying—each a portal into another world with many lessons to be learned. Unlike a contemporary art fair, which usually sees a mad dash to buy in the opening hours, the pace here is a slower burn. ​“Collectors take the time to really look at the pieces,” Suzanne Demisch of Demisch Danant tells Galerie. Her elegant booth is designed as a ​“1960s collector’s apartment” with pieces by Midcentury designers such as Janette Laverrière and Etienne Fermigier. ​“They often come back a couple of times.”

Still, a number of sales were made on the first morning, including the delightful 18th-century Anna Maria Tripp’s Doll’s House at John Endlich Antiquairs, which will be lent to a Dutch museum, a pair of paintings by Heerman Witmont, which had been in the same family for some 350 years, at Bijl-Van Urk B.V, and a five-seat sofa designed by the French architect Charlotte Perriand at Laffanour Downtown.

This year’s edition also looks slightly different thanks to a redesign of the TEFAF Modern section, which features 14 new exhibitors (it’s the first time this section features more exhibitors than the TEFAF Paintings section). A highlight here is an eye-catching booth by Fergus McCaffrey dedicated to the artist Barry X Ball, whose provocative contemporary sculptures riff on the marble statuary found throughout art history. Other noteworthy newcomers include Pace Gallery, Sprueth Magers, and Galerie Gmurzynska.

Museum acquisitions aside, TEFAF Maastricht ultimately offers art and design aficionados a brilliant opportunity for cross-collecting, namely through the opportunity to view pieces in a new context and to discover the fascinating threads that run throughout history.

Here, we share some of the notable works on view at TEFAF Maastricht across all categories, including those with the most riveting back stories.

Antiquities remains the largest section at TEFAF Maastricht, with some delightful objects on offer. The exquisitely decorated Herakles knot belt crafted in 22K gold, garnet, and emerald-like enamel from ancient Greece is arguably one of the finest examples of gold at the fair, and tells a fascinating story. On offer for €2.6 million ($2.9 million), the elegant form and decorative elements symbolize the astounding craftsmanship and lavishness of Greek jewelry produced during the Hellenistic period. ​“It’s an amazingly complete and unrestored example,” says Colnagi director Carlos Picón, the former longtime curator of Greek and Roman art at The Metropolitan Museum of Art. ​“I curated a gold exhibition at The Met in the 1990s, and a major Italian jewelry brand wanted to utilize this fine filigree technique, but unfortunately it is no longer possible. It’s simply the best piece of Greek gold on the market.”

There’s no artist who quite captured the beauty of the female form like Pierre-Auguste Renoir, and his greatest nudes were made during his final years—a time when he was thought to be free from financial pressures and had the luxury to indulge in painting what he willed. This sensuous masterpiece at Dickinson is a beautiful example of this late period that combined his interest in Orientalism (the position recalls the odalisques of Orientalist harems) and the mythical ideal of a woman. The sumptuous, life-size nude, which was sold at Christie’s for $10,162,500 (€7,825,125), sold within minutes on the first morning for an undisclosed sum.

3. A Royal Carriage for the King of Spain at Galerie François Léage

One of the more unusual finds at the fair is this Royal Carriage from 18th-century Spain that was probably created for the future king Charles III, first son of Philip V of Spain (a grandson of Louis XIV). On the back is the carved coat of arms of the Royal House of Bourbon Spain; the arms are surmounted by the crown of an infant. The future monarch would have been carried by a procession of goats, sheep, and ponies. The intricate carving, chasing, and the pastoral painted scenes is of incredible quality. It’s on offer for more than €1 million or $11,133,450.

4. Console (circa 1950) by Osvaldo Borsani and Lucio Fontana at Alexandre Biaggi/​Pierre Passebon

A standout in the small Design section include this 1950s slate-and-wood console, made in collaboration between the avant-garde Italian artist Lucio Fontana and the modernist architect Osvaldo Borsani for the private Milanese home Casa S (Sasfan). The wonderfully curvaceous form seems to defy gravity and hovers somewhere between abstraction and neo-Baroque. Fontana, who currently has a major retrospective on at The Met Breuer, is best known for his Concetto Spaziale, monochrome slashed canvases. But the furniture and ceramics from this early period shed light on his experimental and multidisciplinary practice. It is on offer for €800,000 ($906,824).

5. Virgin and Child by Paolo Veneziano at Haboldt & Co.

The Paintings section is one of the strongest at the fair. The jewel at Haboldt & Co. is the richly colored Virgin and Child by Paolo Veneziano, who is considered the father of modern Venetian art. Its elegant and refined design nods to the currents of Sienese early Trecento painting, and importantly, marks a time when painters shifted from the formal Byzantine depiction of saints to a more naturalistic appearance, showing their emotions, revealed in the way the Christ child looks up at his mother for attention. Due to its small size, it was thought to have been created for private devotion.“There are no other known examples of this work,” explains director Goedele Wuyts, who is asking €1.45 million euros for it. It was in a private collection in France until 2018. ​“Thanks to this discovery, we are able to see Paolo Veneziano in a different light, and it changes the course of art history.”

Another exciting discovery is at Galerie Perrin where the last remaining diorama in the world has been magnificently recreated in the booth. Seventeen years before he invented photography, Louis-Jacques-Mandé Daguerre was experimenting with these installations, which were essentially two paintings lit from the front and through the back inside a black rotating auditorium. Combining Daguerre’s expert knowledge in lighting and scenic effects from theater, together with the aesthetic sensibilities of painter and friend Charles Bouton, the pair aimed to create an awe-inspiring spectacle to thrill the viewer. These spectacles were shown at his custom-built Paris venue dubbed Diorama.“The diorama became such a popular medium with many imitators and it eventually fell out of fashion,” explains Dennis Perrin, a specialist in 18th-century French art. This one was only recently discovered in a private collection in France and is on offer for $1 million.

The centerpiece of Pace’s presentation is a selection of rare early paintings and drawings by Piet Mondrian from the legendary dealer and close friend of Mondrian’s Sidney Janis that reveal the artist’s early experimentation before he would reach pure abstraction. Mondrian created some hundred drawings of flowers in a romantic, naturalistic style in his early career. ​“The flower drawings were his pot boilers—the works he did to feed his family,” Pace director Elliot McDonald tells Galerie. ​“Sometimes he would even misspell his name, which was, of course, intentional.” This remarkable watercolor and graphite on paper is offer for $1.2 million. Another notable work is Reclining Nude (Dunes and Sea), 1912, which went beyond the degree of abstraction in Picasso and Braques’ work from the time in the way Mondrian avoided any suggestion of volume and showed no figuration. ​“It’s really regarded as the first ever Cubist work and was exhibited at the Cubist convention in Paris in 1912,” says McDonald. Reclining Nude (Dunes and Sea) is on offer for $5.5 million.

A pair of monumental globes by Willem Blaeu, considered the greatest publisher and cartographer in 17th-century Holland, is the highlight at Daniel Crouch Fine Books. Blaeu studied with the renowned Danish astronomer Tycho Brahe in 1595 before establishing his own mapmaking business in Amsterdam. He was appointed mapmaker to the Dutch East India Company in 1633, responsible for the highest quality maps for explorers. These stunning hand-colored globes representing heaven and earth, on offer for 1.5 million euros, reveal California as an island and are illustrated with sea monsters, ships, the Great Wall of China, and the signs of the Zodiac. ​“These were the largest maps in the world at one point, and they’re his greatest work,” says director Nick Trimming. ​“We have had some museums come by, and we’re hoping they find a home in Holland.”

9. The Nizam Diamond at Siegelson

A necklace featuring the spectacular Nizam Diamond, on offer for $45 million, is the showstopper in the jewelry section. The stone was missing for some 100 years until New York dealer and first time TEFAF participant Lee Siegelson discovered it. From a renowned collection of Indian jewels, it’s considered one of the most important historical diamonds to hit the market in around 30 years. The 120.8‑carat pear brilliant is D color and internally flawless. ​“I chose to set the diamond on an Indian-inspired necklace with 62 Colombian emerald beads with buff-top carved rubies,” Siegelson tells Galerie. ​“Jewelry should be considered an art form and it’s so inspiring to be here surrounded by every great medium, style, and period of art.”

Newcomer to the fair Shibunkaku juxtaposes the contemporary with the historic to masterful effect. Inside the Japanese gallery’s meditative booth, complete with open timber-slatted walls, a suite of handblown glass sculptures (priced at $12,000 to $25,000) by Japanese-born, Venice-based artist Ritsue Mishima, who works in collaboration with Murano artisans, is paired with the 17th-century Japanese screen that inspired Mishima’s works. The larger piece was snapped up by a Taiwanese collector on the opening morning.

TEFAF Maastricht is on view at the MECC Maastricht through Sunday, March 24.