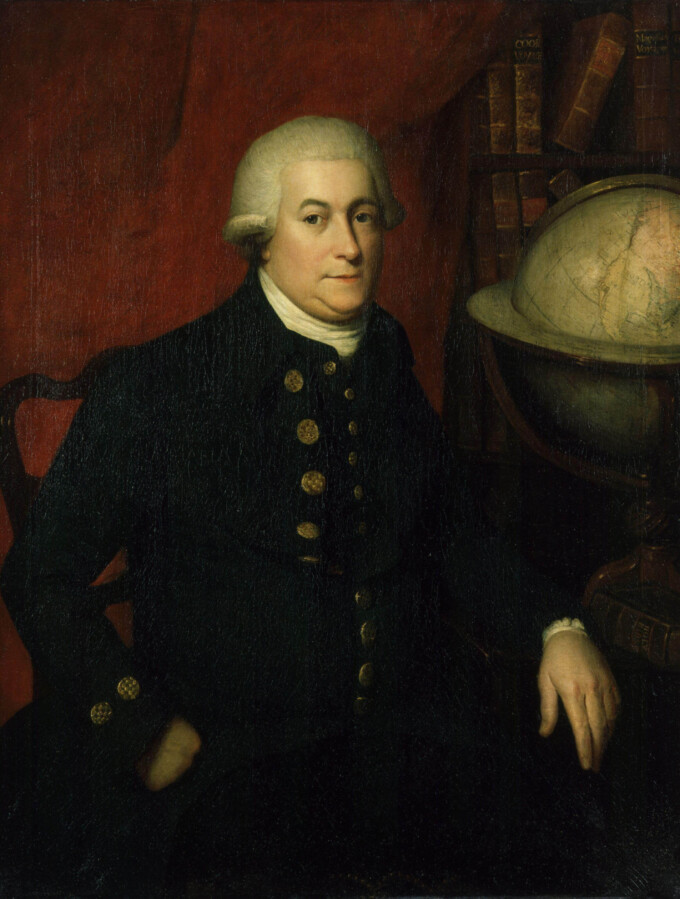 Captain George Vancouver was an English naval explorer. He entered the Royal Navy at the age of 13, and served on the HMS Resolution on Captain James Cook’s second voyage, and on Discovery on Cook’s third voyage. He was present when the expedition discovered Hawaii. He was also present at the Nootka Crisis when Britain and Spain disagreed over the right to colonise the northwest coast of America, and after the Nootka Convention ended the conflict Vancouver was commissioned to survey the coast of Nootka Sound in 1790.

After returning to Britain, Vancouver was given command of an expedition tasked with exploring the Pacific in 1791. The expedition travelled via South Africa through to Asia, stopping at Australia, Tahiti and New Zealand to survey the coastlines and collect samples. It then worked its way up the west coast of America, surveying the coast in detail up to Alaska. This survey would prove that the mythical Strait of Anian, or Northwest Passage, did not exist, at least in the location traditionally given. In 1792, Vancouver joined forces with a Spanish expedition to explore the Georgia Strait before he went to Nootka to receive reclaimed British possessions from the Spanish; the island which the port was on was renamed Vancouver Island. He sent an expeditionary force to try to verify Robert Gray’s map of the lower Columbia River. He returned to Britain in 1795, after circumnavigating South America.

Unfortunately, Vancouver was probably best known in his own time for his long running feud with Thomas Pitt, 2nd Baron Camelford and the cousin of William Pitt the Younger. Pitt was taken on the Vancouver Expedition as an able seaman at the age of sixteen. After the mutiny on the Bounty two years before, Vancouver was keen to maintain discipline on board. Pitt was flogged three times and put in irons once for offences ranging from attempting to trade part of a barrel for sex with a native woman to sleeping on watch. He was sent home early on the HMS Daedalus, which returned in 1793. Pitt then mounted a campaign of revenge against Vancouver, which culminated in him challenging Vancouver to a duel and then, when this was refused, assaulting him on the street.

His reputation was further impaired by attacks from Joseph Banks and even his former friend Joseph Whidbey. He was gravely ill from five years of living at sea and heavily in debt. He waited almost two years for the Navy to pay his salary for the voyage and the prize money for the ships he had captured. He wrote an account of his travels called A Voyage of the Discovery to the Pacific Ocean and Round the World, dying with only a fraction left unwritten. The work was completed and published by his brother John.