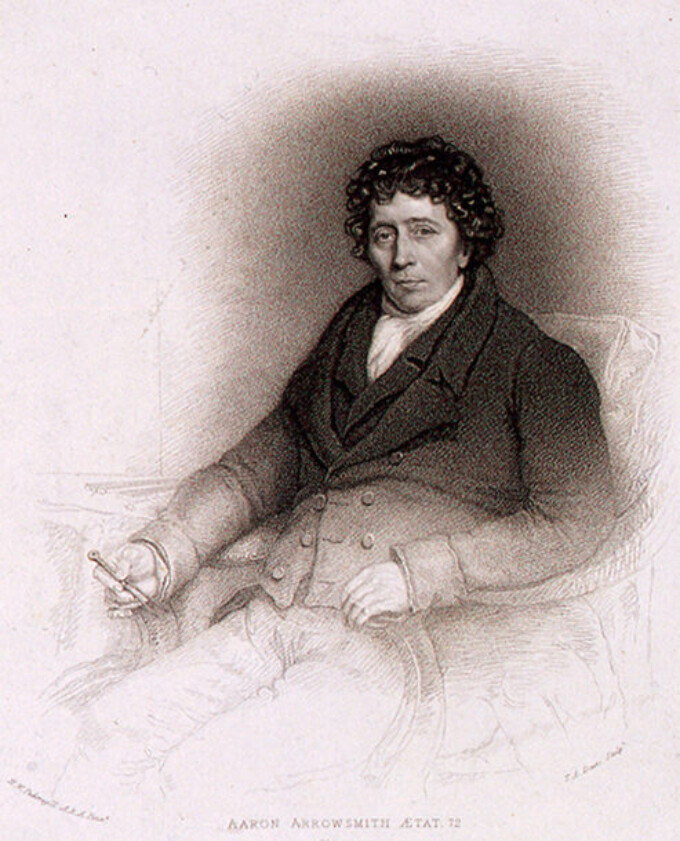 The founder of the Arrowsmith dynasty of cartographers was Aaron Arrowsmith (1750–1823). Born in Winston, County Durham, virtually nothing is known of his formative years: he was in London in 1777, when he witnessed the will of Andrew Dury, a mapseller and publisher, and was probably training with him; he may have trained with William Faden, Geographer to the King, but was certainly employed by John Cary in 1782, as he is credited with the survey work for Cary’s Actual Survey, of the Great Post Roads between London and Falmouth, published in 1784; he is frequently credited with some of the survey work for Cary’s county atlas, Cary’s New and Correct English Atlas: being a set of county maps from actual surveys (1787), but the sources are silent on this and by this time Arrowsmith had established his own business.

Arrowsmith was to establish himself as ​“easily the foremost cartographer of his time” (Tooley), specialising in large-scale or multi-sheet maps; his first independent publication was his Chart of the World on Mercator’s Projection exhibiting all the New Discoveries to the present time: with the tracks of the most distinguished Navigators since the year 1700, on eleven sheets, published in 1790. He followed this with his Map of the World on a Globular Projection, exhibiting particularly the Nautical Researches of Capn James Cook, F.R.S., published in 1794, with an accompanying memoir, the Companion to a Map of the World, which explained his editorial practices.

These maps set a new standard: Arrowsmith was assiduous in analysing and verifying his sources, discarding not only the fictional but also the uncertain, going to printed and manuscript sources for his information, and engraved in a clear and highly legible style. Arrowsmith was also diligent in revising and improving his maps to keep them current, and served as an inspiration for the next generation of (particularly American) surveyors.

Arrowsmith also published a large number of detailed single-sheet surveys, as well as being called on to provide maps for the Parliamentary Papers, and other publications. His work was generally sold dissected and mounted on linen for folding, with a distinctive light blue silk edging (trimming) so maps that are uncut in the original sheet form are particularly desirable, but by their nature as separate sheets all of these can be considered as scarce or rare, highly important and very desirable.

On his death, he was succeeded by his sons Aaron (1802–1854) and Samuel (1805–1839) who worked as partners from 1823 to 1832, when Aaron resigned, ultimately to join the church. While the partners never achieved the heights of their father, in addition to reprinting from his stock, they produced numbers of important maps for the Parliamentary Papers, a school atlas, a bible atlas and a series of wall-maps of classical history.

On Samuel’s death in 1839, the business was acquired by John Arrowsmith, his cousin. John had trained with Aaron sr., joining him in 1810, but leaving on his death to set up his own firm. In skill, John was in no way inferior to the elder Aaron. He too was a notable publisher of important wall-maps, focussed largely on British possessions abroad, including important wall-maps of Canada, Trinidad, British Guyana, Africa and of the rapidly expanding settlements in Australia and New Zealand. However, these are only rarely encountered and little known. Instead, he is best known for his maps published in books; he had an enormous output, supplying some 800 maps for Hansard, and other government publications, making and engraving maps for travel books and also, acting as semi-official mapmaker for the Royal Geographical Society, he contributed large numbers of maps for the Society’s Journals, illustrating the most recent discoveries contributed by Fellows of the Society.

His best known publication is his London Atlas of Universal Geography, exhibiting the physical & political divisions of the various countries of the world, first issued in 1834 and reprinted by others into the twentieth century. Again, he was careful to keep the atlas up-to-date, adding new maps, most famously of Texas (as a short-lived republic), but also updating others. With the comparable atlas of the rival Wyld family, it was the best English world atlas of the period.