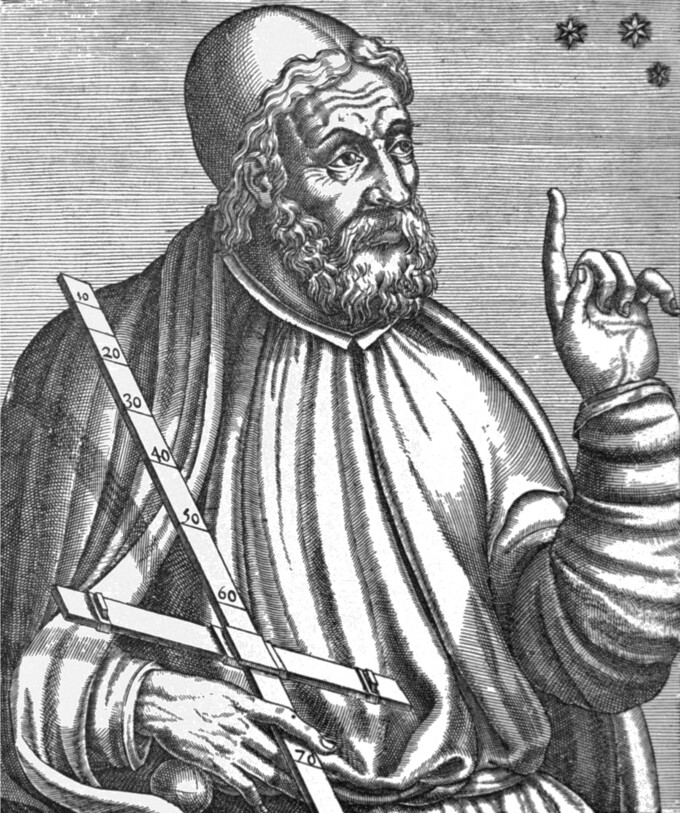 Claudius Ptolemaeus, or Ptolemy, was a Greco-Roman scholar, most famous for the three works he produced on astronomy, geography and astrology. Almost nothing is known of Ptolemy’s life save that he lived in Alexandria, and that he was a Roman citizen, indicated by his Roman nomen of Claudius. His first book, the Almagest was an astronomical text based on a theory of a geocentric universe. It discussed the structure of the universe, the size and proximity of the planets, and the prediction of eclipses. More practically, it also contained a catalogue of over a thousand stars arranged into what would be known as the forty-eight Ptolemaic constellations, and instructions on how to construct a celestial globe.

He wrote his most famous work, the Geographia around 150 AD, using an atlas by Marinus of Tyre as the foundation, and adding information from Roman, Persian and Babylonian sources. Alexandria was an intellectual centre of the ancient world, and it was also a vital point on trade routes between the Far East and Europe, giving Ptolemy access to the knowledge of travellers from all over the empire. The Geographia was intended as a supplement to the Almagest, showing how to put the astronomical principles outlined in the first work into practice, and providing tables of co-ordinates of important places throughout the world. What began as a simple list became a synthesis of classical geographical knowledge from the millennium; Ptolemy collated and compared every text he could lay hands on. The Geographia eventually ran to eight books. The first was concerned with the practice of geography and cartography; the middle six were filled with tables of co-ordinates for over 8,000 locations; and the final book suggested a method of dividing the oikuomene (the Greek term for the known world) into twenty-six regional maps: ten of Europe, four of Africa, and twelve of Asia, preceded by one of the world, for which he offers three projections. This format would be retained in atlases for centuries. Although the Geographia gives instructions for the construction of maps, it is unclear whether the original manuscript versions of the text contained any; at any rate, later copyists reconstructed maps from the co-ordinates given in the text, rather than existing examples. The first modern printed edition with maps was not published until 1477 in Bologna.

The earliest Greek manuscript copies still in existence date from the thirteenth century; the earliest illustrated copies are Byzantine. It was translated into Latin by 1407 by Emanuel Chryslaras and Jacobus Angelus in Florence, initiating a wave of modern editions. Ptolemy was the foremost classical authority on geography, and continued to be so even as it became apparent that his ideas were incomplete or incorrect. He did not, of course, make any mention of the Americas, which were unknown to the Greeks and Romans; he perpetuated the idea of a large southern continent, Terra Australis, which counterbalanced the landmasses in the northern hemisphere; and as a result of Terra Australis, he thought the Indian Ocean was landlocked. It was not until the publication of Abraham Ortelius’s Theatrum Orbis Terrarum that an atlas would use maps of the modern world as a basis, rather than ones constructed according to Ptolemy.