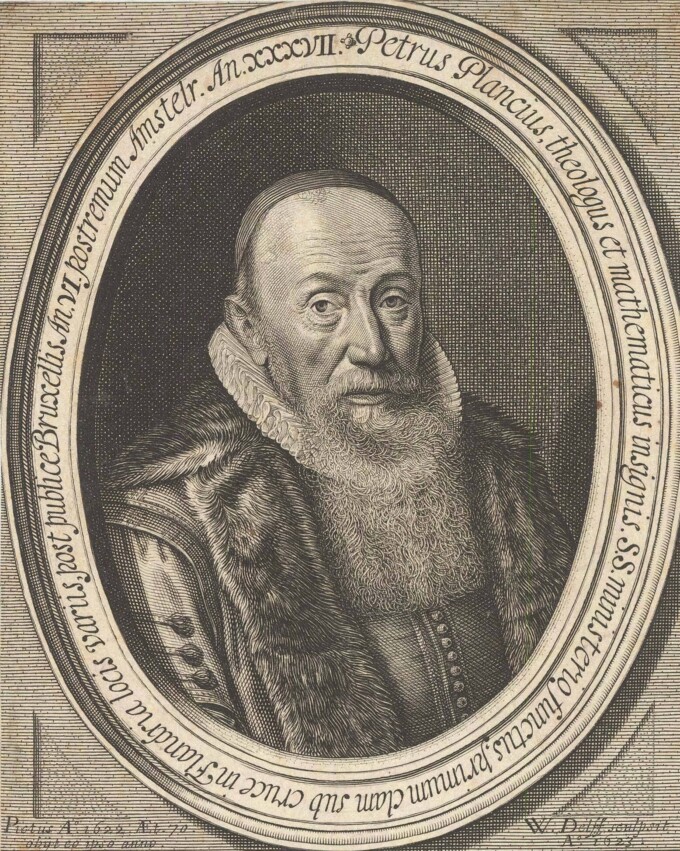 As a result of his keen interest in historical and theological geography, Plancius’s first work as a cartographer was to prepare five maps for the Dutch Bible of 1590. One of these maps, his double-page world map, Orbis Terrarum Typus De Integro Multis In Locis Emendatus auctore Petro Plancio 1594, was not included in the bible, but eventually issued separately. It shows the four possible sailing routes to the lucrative markets in Southeast Asia. In the meantime, in 1592, Cornelis Claesz had published a monumental version of Plancius’s world map, engraved on twelve sheets, Nova et exacta terrarum orbis tabula geograpbica ac hydro-graphica, known only in two examples, one dated 1594 with a few corrections. Claesz was granted a privilege to publish the map for twenty years, and petitioned for a similar privilege to publish twenty-five additional maps which Plancius had obtained from Bartolomeo de Lasso, cosmographer to the King of Spain.

This windfall of previously secret information about sailing routes to the East and West Indies was augmented by a significant cache of Portuguese information and maps obtained, with Plancius’s encouragement, by the De Houtman brothers, Cornelius and Frederick, on a secret mission to Lisbon; and from accounts provided by Jan Huygen van Linschoten, who returned from Goa in September of 1592. A Dutch venture to the East Indies was now possible.

Plancius became closely involved in equipping the expeditions with charts and navigational instructions, and took it upon himself to personally train the pilots. His instructions for the Eerste Schipvaart — First Voyage — on how to reach the East Indies are included in a surviving manuscript example of his Memorie…, dated 1594/95. Plancius also compiled his Insulae Moluccae celeberrimæ,… (1594), a comprehensive chart of the East Indies, that improved significantly on its predecessors. Subsequently Plancius’s interest in the Dutch exploration of Southeast Asia was formalized: he was an original investor in the VOC, and became their first hydrographer.

It was not just navigational charts of the sea routes that voyages to the East Indies required; and at the time, there were no comprehensive, or reliable, charts of the southern stars to guide the sailors, although Plancius had himself produced a celestial globe in 1589 which had included a depiction of the Southern Cross. So, Plancius commissioned a pilot, Pieter Dirkz Keyser to record the position of as many stars as he could on the first voyage. Although Keyser died at sea in 1596 before his return, he was able to record about one hundred and thirty stars alongside his colleague Frederick de Houtman, and the records reached Plancius when the surviving voyagers returned. Plancius took these new discoveries and divided the stars into twelve new southern constellations, which mostly referred to animals and subjects described in natural history books and travellers’ journals of his day. Nine years later, Plancius introduced eight more constellations on another celestial globe of 1612. Most of these constellations were not adopted by other cartographers or astronomers, but two of them survive in modern skies: Monoceros (the Unicorn), and Camelopardalis (Giraffe). Plancius can be attributed with the authorship of fifteen constellations, out of the eighty-eight that are now accepted by astronomers.