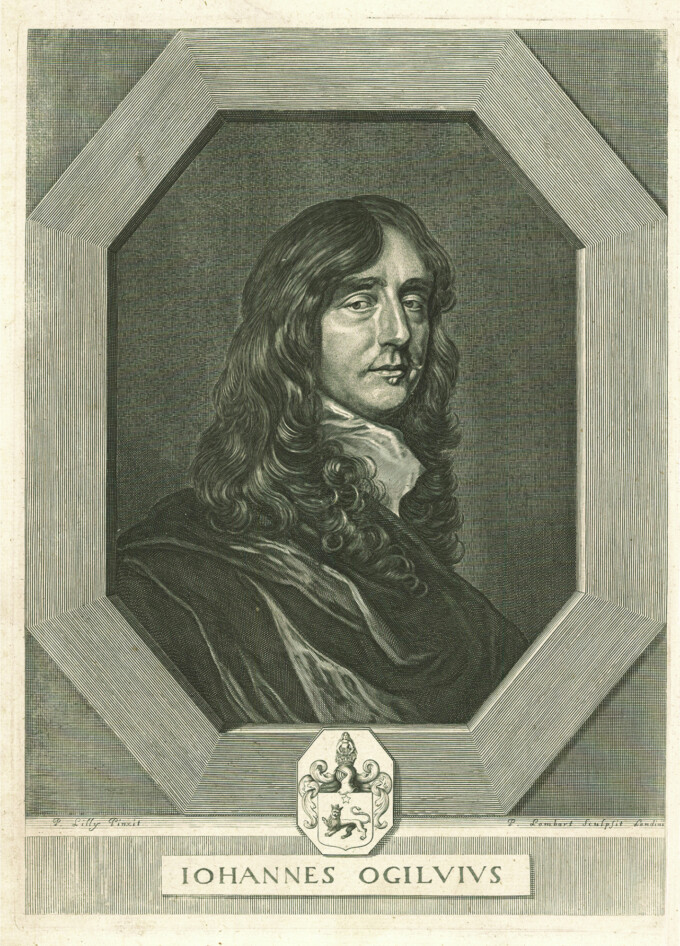 John Ogilby is one of the most interesting of all British mapmakers, remarkable for the way that he dealt with successive adversities in his private life: having to work at an early age to pay off his father’s debts, a dancer whose career ended with a dance injury, a theatre owner who saw the theatre destroyed in riots, along with all his possessions, and a literary publisher whose stock was destroyed in the Great Fire of London, but surviving, going on to become Cosmographer to King Charles II.

Ogilby was born in Scotland, but moved to London, where he was apprenticed in the Merchant Taylors, freed by patrimony on 6th July 1629. After the early setbacks as a dancer and theatre owner, he established himself as a publisher in London, specialising in lavish classical translations, which he made himself, notably illustrated editions of Virgil.

After the Great Fire of London in 1666, Ogilby repositioned himself as a publisher specializing in geographic and cartographic material. After the Fire, with his step-grandson William Morgan, Ogilby became a ​“sworn viewer” of the lands within the City of London’s property, and undertook a survey of the capital, which they later published, petitioning the Corporation of the City of London for financial assistance to fund the project.

While working on these larger projects, Ogilby also conceived an ambitious atlas project, to describe the British Isles and the countries of the world. The first volumes were translated from the Dutch originals, and in the main illustrated with Dutch plates, although some English maps were created for them including Johann Nieuhoff’s An Embassy from the East-India Company of the United Provinces, to the Grand Tartar Cham (1669), Arnold Montanus’s Africa (1670) and his Atlas Japanennsis (1670).

In parallel Ogilby also worked on companion volumes for the British Isles, described in proposals published in 1669 and 1672, but these were never completed, and only a few maps and views survive: a prospect of The Citie of Edenbvrgh from the South (1670); A New Map of Kent actually Survey’d and Deleniated (1672); a sheet devoted to Canterbury (1672); An Actuall Survey of Midlesex (1673) and surveys of Essex and of the town of Ipswich both published posthumously in 1678 and 1698 respectively.

Ogilby’s lasting achievement was his Britannia, Volume the First: or, an Illustration of the Kingdom of England and Dominion of Wales (1675) the first published road-book of any country in western Europe, the roads drawn on a uniform scale of one inch to one mile, in the form of strip-maps running up the page. The volume was hugely successful, and much reprinted and, when the copyright expired, heavily copied by subsequent mapmakers, including Owen and Bowen, John Senex and Thomas Gardner.

Despite all his problems, Ogilby left an important legacy; he was Royal Cosmographer and appointed to the specially created post of His Majesty’s Cosmographer and Geographical printer in 1675. He was a friend and familiar of Samuel Pepys and Sir Robert Hooke, featuring in both their diaries. It is simply unfortunate that he entered on this final phase of his career so late in life, and that it was brought to a close by his death in 1676.