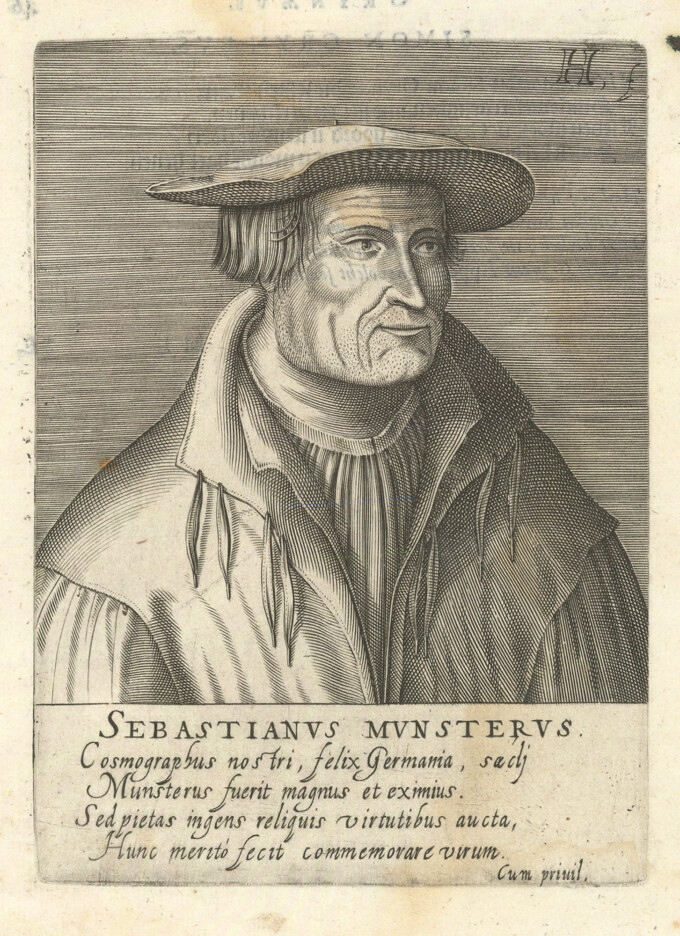 Cosmographer, humanist, theologian and linguist, Münster was famous in his own age as a Hebraist, composing a Hebrew grammar and a list of Hebrew, Latin and Greek synonyms which were used widely by sixteenth century humanists. A Franciscan friar from around 1506, Münster studied in Tübingen and taught in Basel and Heidelberg before leaving the order and moving to Basel in 1529, where he took up the chair in Hebrew. Whilst in Basel, Münster indulged in his other great love: that of cartography. The love affair had begun some years earlier in Tübingen, when under the tutelage of Johann Stöffler. Münster’s notebook of the time contains some forty-three manuscript maps, most of which were based upon others’ work, except, that is, for his map of the Rhine from Basel to Neuss.

Münster would produce his first map in a printed broadsheet of 1525. The map, which covers Germany, also came with an explanatory text (only extant in the second edition of 1528), which lays out Münster’s vision for a new great survey of Germany. He readily conceded that the job was too great for one man and so called upon fellow academics to cooperate and supply detailed maps and text of their respective areas, with Münster working as the great synthesiser. Although the project would never get off the ground, much of its methodology and material would be used, with great success, in his Cosmographia.

Throughout the next decade he produced, and had a hand in, several important works that would cement his reputation as one of the leading cartographers of his day; these included, among others, Johann Honter’s celestial charts (1532), his own Mappa Europae (1536), and Aegidius Tschudi’s map of Switzerland (1538). In 1540, he published his edition of Ptolemy’s Geographia, which contained not only new maps of Germany and the Low Countries, but also, for the first time, a set of maps of the four continents.

In 1544, Münster produced his greatest work, the Cosmographia. It was the culmination of a lifetime’s study, in which he distilled the geographical information he had gathered over the past thirty years. Münster organises the work in a series of periegesis or geographical travels. He begins by describing the area’s geography, history, ethnography, flora and fauna, and, famously, strange peoples, fabulous plants, and wondrous events.

The work would prove to be so popular that some forty editions were published between 1544 and 1628, with the number of maps expanding from twenty-six in the 1544 to two hundred and sixty-two by 1628. Its huge popularity would not only — as Burden states — ​“seal the fate of America as the name of the New World”, but would form the basis of general knowledge of many other parts of the world as well.