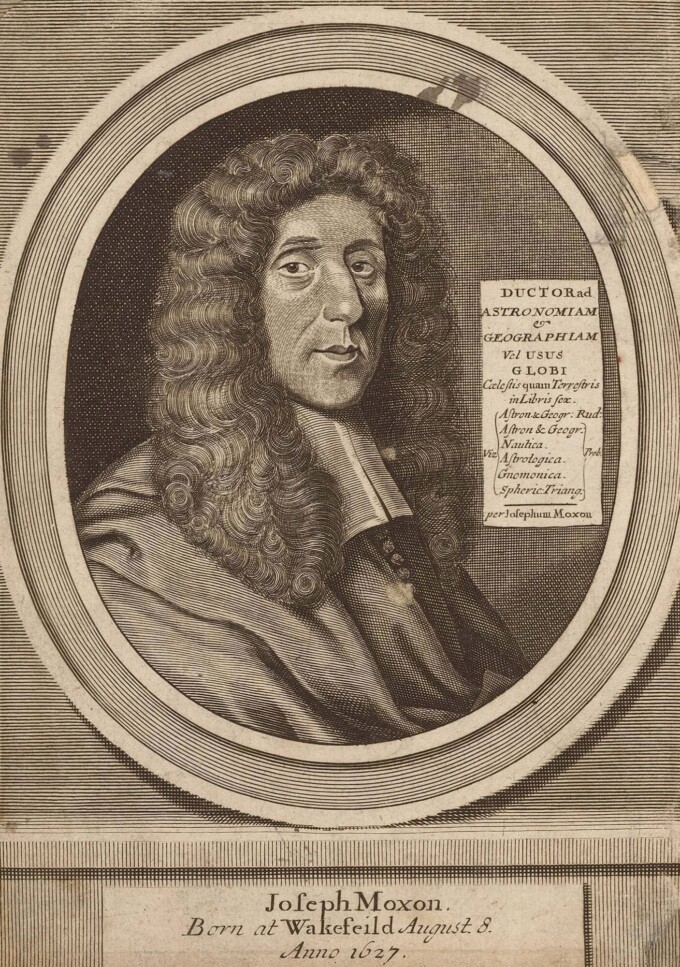 Although born in Wakefield, Yorkshire, Moxon accompanied his Puritan(ical) father, James, to first Delft in 1636, and then Rotterdam in 1638 where he printed Bibles in English. By September 1646, Joseph and his brother James were back in London and had established themselves as printers of books of interest to Puritans – with one exception, A Book of Drawing, Limning, Washing or Colouring of Mapps and Prints (1647), for the map seller Thomas Jenner.

This commission inspired Joseph to leave his brother with the publishing business to pursue an interest in globe and map-making. In Amsterdam in 1652, he commissioned a set of copper-engraved globe-gores, which he used to print 15-inch celestial and terrestrial globes. At the ​“Sign of Atlas”, from various addresses in London, until 1686, he issued maps, charts, globes, mathematical instruments in paper, and scientific books.

In 1662, Moxon was appointed hydrographer to Charles II ​“for the making of Globes, Maps and Sea-Platts”; and in 1678 he became the first tradesman to be elected to the Royal Society.

Moxon developed a lifelong interest in craft of printing, and his ​‘Proves of Several Sorts of Letters Cast by Joseph Moxon’ (1669), is the first complete English type specimen known. His Mechanick Exercises: … Applied to the Art of Printing, published in twenty-four numbers in 1683–4, ​“details all aspects of printing techniques of his day, capturing for posterity the unrecorded tacit craft skills. The value of the text is not that it explains technical innovation—there is none—but it is the precise record of the printing trade seen through the eyes of a practitioner” (Bryden for DNB).

From 1686 until his death, Moxon lived with his son, James, a map engraver who continued to sell his father’s globes, instruments, and books which included a third and enlarged edition of his father’s Mathematical Dictionary (1700), the first English-language dictionary devoted to the terminology of mathematics.