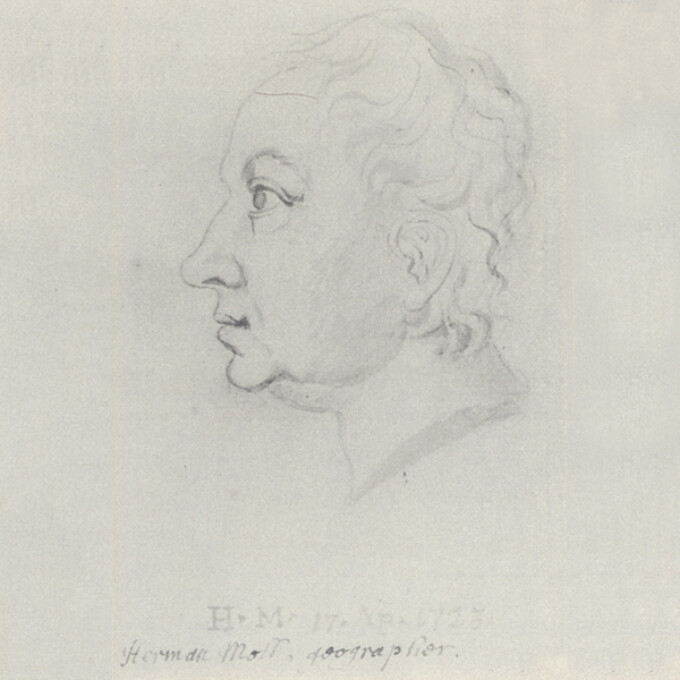 Moll first appears in 1678 as an engraver working on Moses Pitt’s ​‘The English Atlas’ with Sir Robert Hooke, one of the patrons of the project. Moll later claimed that he was employed by Prince Rupert to assist them. Shortly after the Pitt atlas project failed, Moll tried to establish a business as a mapmaker, or ​“Geographer” as he termed himself, but was unsuccessful. Much of his career was spent as a jobbing engraver for mapmakers and publishers, particularly in the book trade for people like James Knapton, providing the maps for their travel accounts. It was the availability of an engraver that gave the impetus to so many publishers to commission maps for publications, and may account for some of the success of such publications.

In 1707 Moll commenced work on his most famous publication, ​‘The World Described’, a collection of two sheet maps of the world. It was one of the most famous English atlases of the eighteenth century, and long-lived; the atlas was completed in 1717; the maps, in other hand, were still being advertised for sale in 1796.

Moll was also fond of filling blank spaces on his maps, particularly those of ​‘The World Described’ with text panels, often a commentary on the region depicted, but on several maps he was equally happy to vent his bile on rival mapmakers: the English partners Jeremiah Seller and Charles Price; the publisher and engraver or John Senex; and the French, notably Guillaume Delisle.

Moll was involved in a number of atlas publications: the ​‘Thesaurus Geographicus’ (1695), re-issued in a number of other guises, and expanded to form the ​‘Atlas Geographus’ (1711); his ​‘Twenty Four New and Accurate Maps of the Several Parts of Europe’ (1706); and ​‘A New Description of England and Wales’ (1724).

In his will, there is no mention of a stock of printing plates or other business assets. It is probable that much of the material he put his name to was owned and financed by others, with Moll as the creative influence and ​“celebrity name” for the title-page.