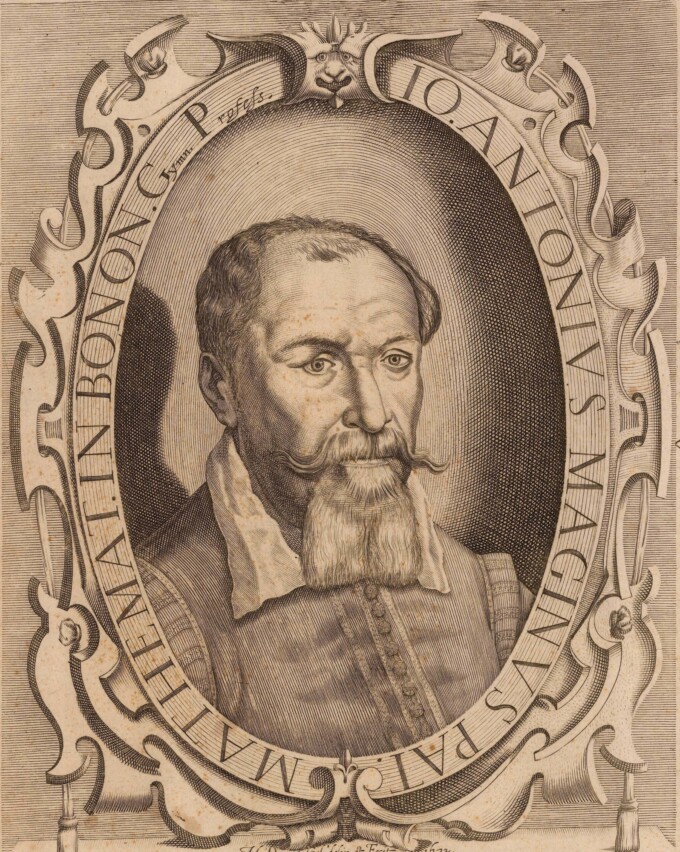 Born in Padua to a well-to-do family, Magnini went on to study arts at the university of Bologna, and had a specific interest in mathematics and astrology. He lectured and published on these subjects, winning a teaching post at the university in 1588, where he remained until his death. Notably, the losing candidate in this instance was Galileo Galilei. Magini became renowned for his knowledge on astronomy and astrology, and thus attracted the attention of famous contacts, the most important of these the Duke of Mantua Vincenzo Gonzaga, whose sons he educated on the subjects, from 1599. Magini was also personal astrologer to the Duke, and his De astrologica ratione (1607) discusses the uses of astrology in medicine. Magini remained close to Ferdinando Gonzaga (1587–1626), who, in spite of becoming a cardinal in 1607, continued with his own alchemical experiments, with Magini’s encouragement and occasional instruction.

Nevertheless, Magini adopted some scientific technology. In 1592, his De Planis Triangulis explains the use of quadrants in astronomy and in surveying, and two surviving instruments that refer to him by name are known. He retained an interest in mirrors, publishing a treatise on concave spherical mirrors, and even presenting some to Jacopo Boncompagni (son of Pope Gregory XIII and Prince of Sora), to Cardinal Alessandro Farnese (son Pier Luigi Farnese, Duke of Parma), and to the Holy Roman Emperor Rudolf II.

In 1595, Magini began the project for which he is now best known, his atlas of Italy, when he published a map of the Bologna region. In the dedication he writes, ​“Inasmuch as I desire to publish a complete atlas of Italy, showing, besides the provinces, the territories of each city, I have decided to publish first this map of the territory of Bologna …”. As Ashby reports: it ​“was soon followed by other maps, and in two years he had the greater part of the maps of North Italy already engraved, and some of them published. They were apparently sold separately and are extremely rare in this state; for, being unable to obtain material for his maps of Southern Italy, he started correcting and revising what he had already done, publishing a new map of the territory of Bologna in two sheets in 1599. At last, in 1602, he received materials for the formation of the maps of the kingdom of Naples; and in 1604 nearly the whole atlas was ready, and an index of it appeared in the Latin edition of his astronomical work, the Tavole del Primo Mobile. But now he was unable to obtain engravers, owing to a series of misfortunes, and began a lengthy descriptive commentary which was to accompany the maps, but which was never published, and is for the most part lost. At last, in 1607, he secured the services of one Benjamin Wright, who, in the following year, engraved for him a large map of Italy in six sheets. Wright, however, was something of a drunkard, and pawned several of the plates which he had done: and it was only in 1613 that the engraving of the plates was finished, after a good deal of further revision. The printing at last began in Bologna at the end of 1616; but Magini’s death delayed the appearance of the work until 1620, when his son Fabio, who was not fifteen when his father died, finally brought it out. He dedicated it to Ferdinando Gonzaga, a member of the ducal family of Mantua, with which Giovanni had been in close personal relations, and who indeed had procured him a great deal of manuscript material from the governments of the various states of Italy” (Ashby, Review: L’ ​‘Italia’ di Giovanni Magini e la Cartografia dell’ Italia nei secoli xvi. e xvii by R. Almagià, in The Geographical Journal, 62 (3) (1923), 211–213).