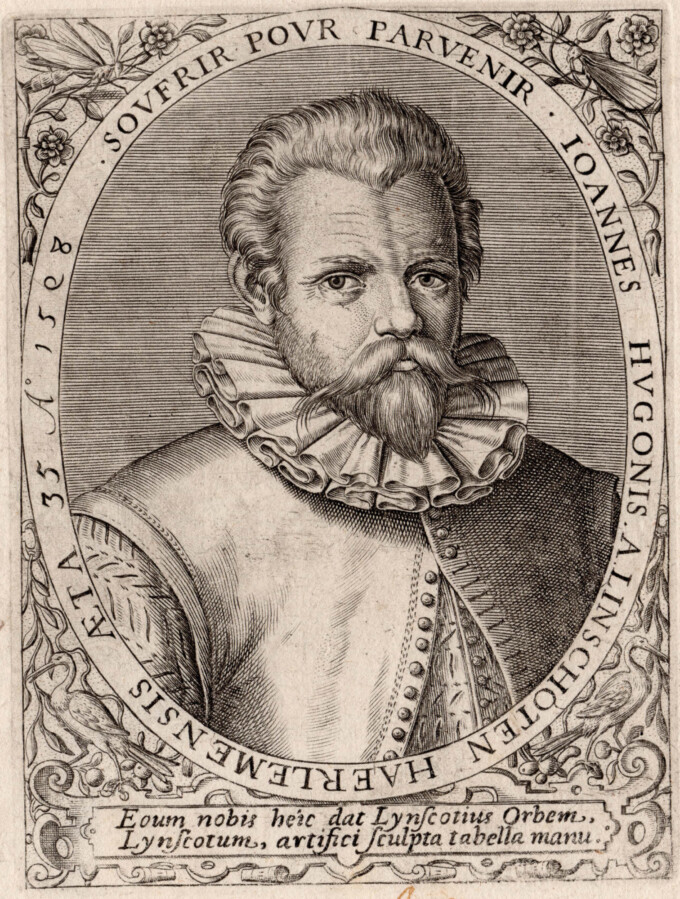 Filled with wanderlust, Jan Huyghen van Linschoten, as he was to become, wrote to his parents from Goa in 1584: ​“Day and night my heart yearns to see strange countries – something to talk about when one is old. There is no time more wasted than when a young fellow stays in his mother’s kitchen like a dimwit, knowing neither what poverty is, nor luxury, nor what the world contains, an ignorance, which is often the cause of his ruin”.

He had first left the Netherlands for Lisbon in 1579, following in the footsteps of his older twin brothers. With the assistance of his brother, Willem, he secured passage to India in 1583 as secretary to Dominican Joao Vicente da Fonseca, the newly-appointed Portuguese Archbishop of Goa. Goa was then the capital of the entire Estado da India, i.e. all the Portuguese possessions bordering the Indian Ocean.

As a result of his position, Jan Huyghen had access to secret information, including the Portolan charts relating to the East Indies that had been well guarded for over a century. With an impressive disregard for the trust placed in him, Linschoten began to copy these maps meticulously, displaying an ​“avaricious thirst for knowledge which enabled him to get detailed information of land and sea as far afield as the Spice Islands and China” (Penrose). While in Goa, he decided to augment this status by adopting the suffix ​“van Linschoten”, although his genealogy had nothing to do with that little town in Utrecht province.

In 1588, the Spanish Armada was defeated by the English fleet, with the result of a seismic shift in power in Europe, especially at sea. Shortly afterwards, with the death of the Archbishop in 1589, Linschoten was obliged to set sail for Lisbon, but was delayed for two years in the Azores by a shipwreck following an attack by English pirates. He turned his sojourn on the island of Terceira to great advantage: top secret rutters of the Portugese navy and the Carreira da India, were made available to him by disaffected Azorean sailors who hated their Spanish masters.

He landed in Lisbon in 1592 and shortly thereafter traveled back to his home at Enkhuizen: an experienced sailor and internationally connected administrator.

In 1595, with the editorial support of well-traveled doctor-naturalist, Bernardus Paludanus (Berent ten Broecke), and the Amsterdam publisher, Cornelis Claesz, Linschoten began to record his travels. Linschoten’s practical experience meant that his scholarship was less that of Renaissance classicism than of a new empirical science: an objective description of economic, political, and biographical phenomena; corroborated by evidence of ​“specimens, substances, cash and scientific ideas between the Netherlands and the Indian Ocean” (Saldanha).

The publication of his Itinerario, effectuated a leap in knowledge for the Dutch, inaugurating a new struggle for the Indian Ocean and a new phase of globalization, opening the Indian Ocean to the European imagination, disclosing nautical and economic information that had previously been carefully guarded by the Portuguese. The Reys-gheschrift, was published early in 1595, and was used on board the earliest predatory Dutch voyages to the spice islands at the end of the sixteenth centuries.

In 1597, Linschoten became city treasurer of Enkhuizen, and one of its most respected citizens. In 1602, he invested 1,500 guilders in the VOC’s Enkhuizen Chamber, followed by another 300 guilders in shares five years later. In 1606, he was appointed to a research committee for establishing the West Indian Company and made custodian of the city hospital. He died in 1611.