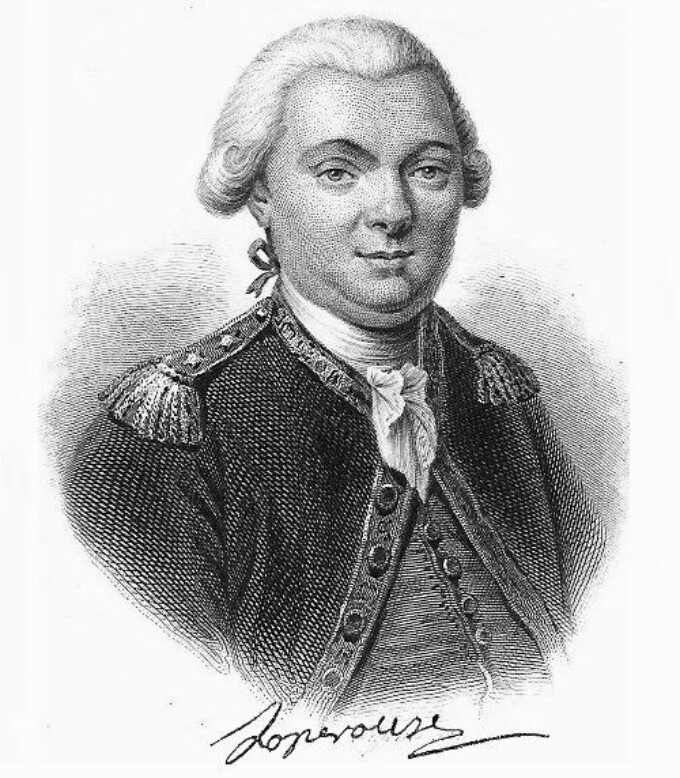 Jean-François de Galaup, comte de La Pérouse was a French naval officer and navigator, whose expedition disappeared while exploring off the coast of Australia. La Perouse had an exemplary record in the French navy, commanding French vessels attacking Hudson Bay during the American War of Independence, and when the Paris Academy of Sciences decided to send an expedition to the Pacific to expand on the discoveries of Captain James Cook, he was a natural choice. The expedition set off in 1785, aiming to explore the northwest coast of America with a view to establishing a fur trade, stake a French claim on the American coast, and find a northwest passage to the Pacific. Louis XVI himself took a personal interest in the venture, keen for France to equal the discoveries made by their rival England under Captain James Cook. The expedition comprised two ships: La Boussole, under La Perouse’s command, and the Astrolabe. The expedition went first to Alaska, then headed south to California. They then sailed around into the Pacific (the commander of the Astrolabe and 11 of his men were killed in Samoa) and headed to Australia after hearing the British were intending to begin a colony there. They arrived in Botany Bay after Arthur Phillips and his First Fleet convoy of convict ships, and after a few months of civil coexistence, set sail in March 1788. This was the last time that the expedition was seen alive.

The ships had disappeared without trace, igniting a fever of speculation in France. La Perouse had sent copies of his expedition journal and maps back to France at every stop, ensuring that the voyage was well documented, and his last bulletin sent at Botany Bay had outlined his planned route. When he failed to reach Mauritius by December 1788 as planned, it raised fears; his wife Eléonore moved to Paris so she could hear news of him as soon as it came. Even during the turmoil of the Revolution, the Society of Natural History petitioned the National Assembly to send a rescue mission; Louis XVI supposedly asked after La Perouse on the way to the block. Their fate remained a mystery for almost half a century, until the English explorer Peter Dillon found French goods while trading with natives in Polynesia, indicating that La Boussole and the Astrolabe had visited Vanikoro, one of the Santa Cruz Islands (now the Solomon Islands). In 1828, the French explorer Jules-Sébastien-César Dumont d’Urville also visited the island, where locals told him that they had massacred men from ships wrecked nearby as they came ashore, although some of the crew managed to escape. D’Urville found wreckage from the Astrolabe on reefs off the coast of Vanikoro, corroborating their story. None of the crew were ever found, although some of d’Urville’s informants claimed that they had made a vessel and escaped, and a couple had apparently continued to live on the islands for some years, one of whom was identified as a ​“chief” by locals.

It has been suggested that the remaining members of the expedition were still alive in 1790. Captain Edward Edwards, commanding the HMS Pandora, saw smoke signals from Vanikoro whilst searching for mutineers from the Bounty. He had already found 14 in Tahiti, who were being held in a small cage on deck. Reasoning that mutineers would not advertise their position, he ignored them and sailed on, and the final chance of solving the mystery of the expedition was lost. The wreckage of La Boussole would not be found until 1964, and the ultimate fate of La Perouse remains unknown.