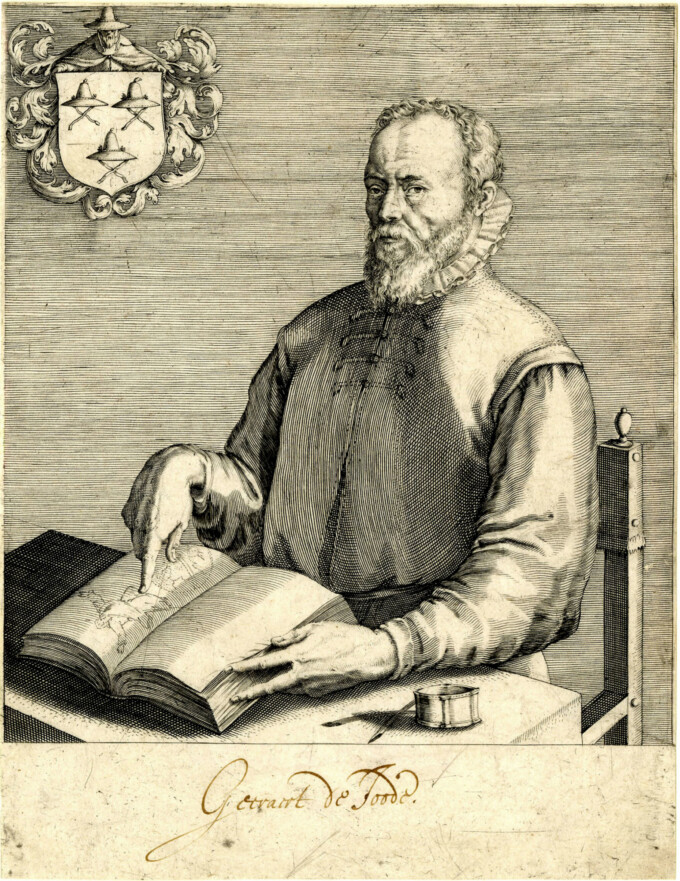 Gerard de Jode was a cartographer, engraver and publisher who lived and worked in Antwerp during the sixteenth century. He was born in Nijmegen, but moved to Antwerp, presumably to find more work. He was admitted into the Guild of St Luke in 1547, and received the right to print there in 1551. He printed several outstanding contemporary works including a Giacomo Gastaldi’s world map in 1555, Jacob van Deventer’s map of Brabant in 1558, Ortelius’s eight sheet map of the world in 1564, and maps by Bartholomeus Musinus and Fernando Alvares Seco. He also issued his own reduction of Ortelius’s world map, Universi Orbis Seu Terreni Globi. This was included in his most important work, the atlas Speculum Orbis Terrarum, published in 1578 with text by Daniel Cellarius. It was designed to compete with Abraham Ortelius’ atlas, Theatrum Orbis Terrarum, which had been published eight years earlier. Ortelius had obtained a monopoly which prevented earlier publication, and used his influence to disrupt de Jode’s application for a royal privilege. By the time this was finally granted, Ortelius’s work had become so popular that de Jode’s atlas did not sell well, despite the accuracy and clarity of his maps. Only about a dozen examples have survived.

His son Cornelis (1568–1600), was not a cartographer but continued his father’s publishing business after studying at Douai. He produced an enlarged edition of the Speculum, called Speculum Orbis Terrae (1593), which Gerard had been planning before his death. It contained a twin polar view world map, Hemispherium ab equinoctiali linea, drawn after the Arabist cartographer Guillaume Postel, and the first map devoted to the west and northwest coasts of Africa. Either Cornelis or Gerard was the first person to make a globe following the geography of Mercator in the southern hemisphere; no copies of it survive to provide evidence. After Cornelis died, most of the de Jode stock was bought by Jean Baptiste Vrients.