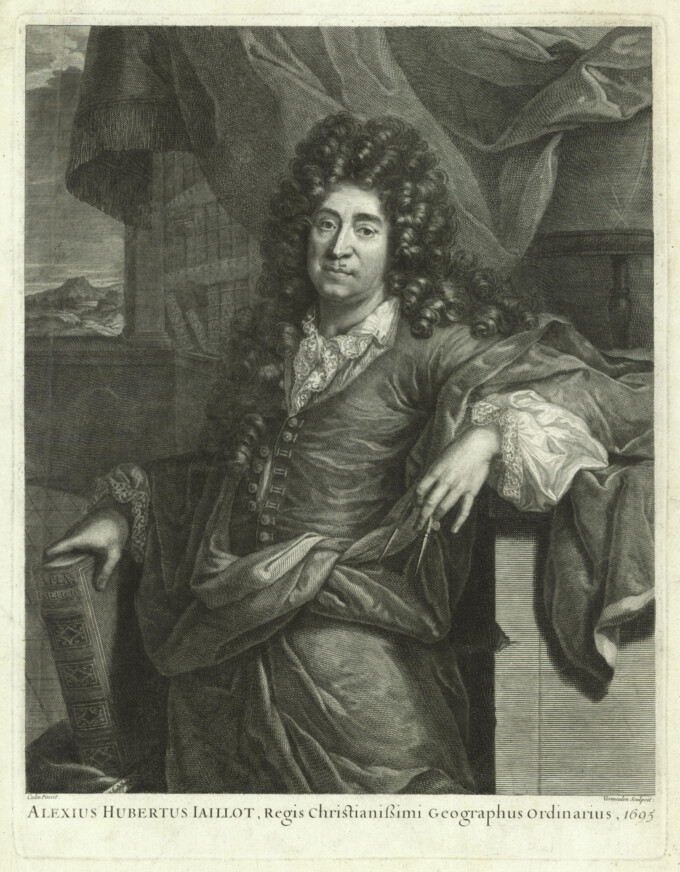 Alexis Hubert Jaillot trained in sculpture, and inherited a map and print publishing firm from his wife, the daughter of the crown colourist Nicholas Berey. He followed Nicholas Sanson and his descendants in ushering in the great age of French Cartography in the late seventeenth and eighteenth centuries. The publishing center of the cartographic world gradually transitioned from Amsterdam to Paris following the disastrous inferno that destroyed the pre-eminent Blaeu firm in 1672.

When Jaillot married the daughter of the ​“enlumineur de ala Reine”, Nicholas Berey, he found himself positioned to inherit a lucrative map and print publishing firm. When Nicholas Sanson, the premier French cartographer of the day, died Jaillot negotiated with his heirs to republish much of Sanson’s work. Though not a cartographer himself, Jaillot’s access to the Sanson plates enabled him to publish numerous maps and atlases with only slight modifications and updates to the originals. As a sculptor and an artist, Jaillot’s maps were particularly admired for their elaborate and meaningful allegorical title cartouches and other decorative elements. Jaillot used his allegorical cartouche work to extol the virtues of the Sun King Louis IV, and his military and political triumphs. These earned him the patronage of the French crown who used his maps in the tutoring of the young Dauphin. In 1686, he was awarded the title of ​“Geographe du Roi” and with it significant prestige and the coveted yearly stipend of 600 Livres. Jaillot was one of the last French map makers to acquire this title. Louis XV, after taking the throne, replaced the position with the more prestigious and singular title of ​“Premier Geographe du Roi”. Jaillot died in Paris in 1712. He was succeeded by his son Bernard Jean Hyacinthe Jaillot, and grandson Bernard Antoine.