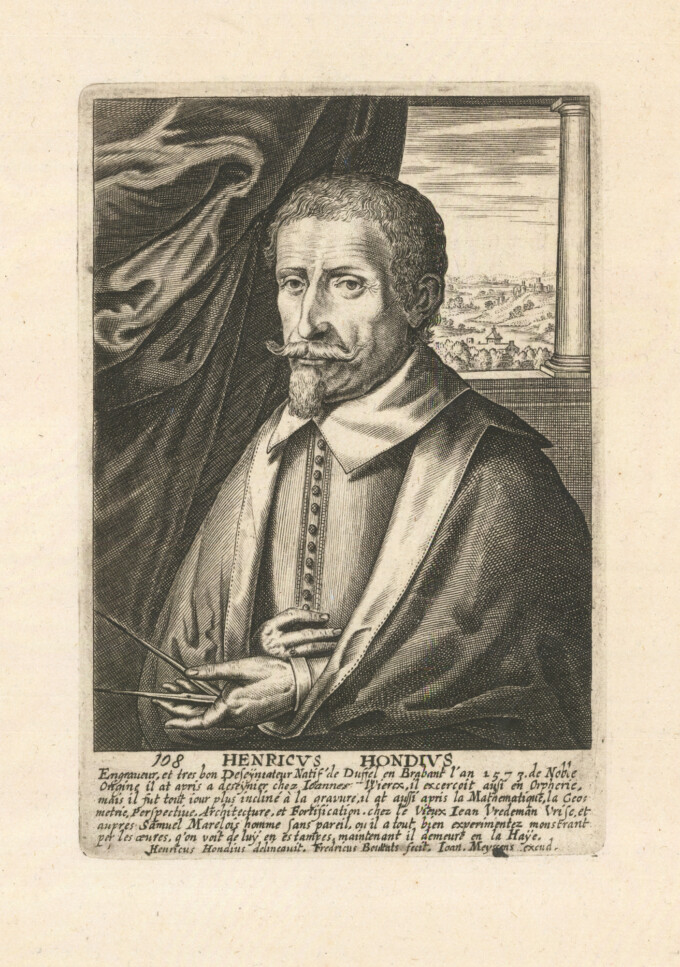 It was Jodocus Hondius I who established the Hondius publishing house in Amsterdam, the center of cartographic production, in the late sixteenth century. However, between approximately 1584 to 1593 he lived and worked in London. Whilst there, he took a particular interest in Drake’s voyages and the man himself, with several engravings of the explorer attributed to him.

Hondius purchased many copperplates by Gerard Mercator (1512–94) in July of 1604, probably bought at Leiden at the auction of Mercator’s library, then in the possession of his grandson, Gerard Mercator, Jr. Hondius built a successful publishing career from his own Mercator-Hondius atlas, issued as Gerardi Mercatoris Atlas Sive Cosmographicae in 1606 with thirty-seven newly engraved maps, taking the total to one hundred and forty-four. A revised text was written by Petrus Montanus. In 1609 a French edition was published, with by now, one hundred and forty-seven maps.

Henricus (known as Hendrik) Hondius I (1573–1650), a relation of the cartographic family, was an engraver of his own prints, and very successful publisher. In fact, for many years, he was the only publisher of prints in The Hague, employing a staff of professionals to engrave and print much of his output. Over the course of a career lasting more than five decades, Hondius published and sold more than one thousand engravings and etchings of portraits, biblical scenes, landscapes, maps, broadsheets and book illustrations. Many of the prints were political in nature: celebrating the supremacy of the new Dutch Republic and its leaders; or maps depicting Dutch military campaigns, with descriptions of troop movements. Extensive records of Hondius’s business survive, and show that many prints could be purchased in editions that were coloured or uncolored, illuminated with gilt and silver, and even printed on silk.