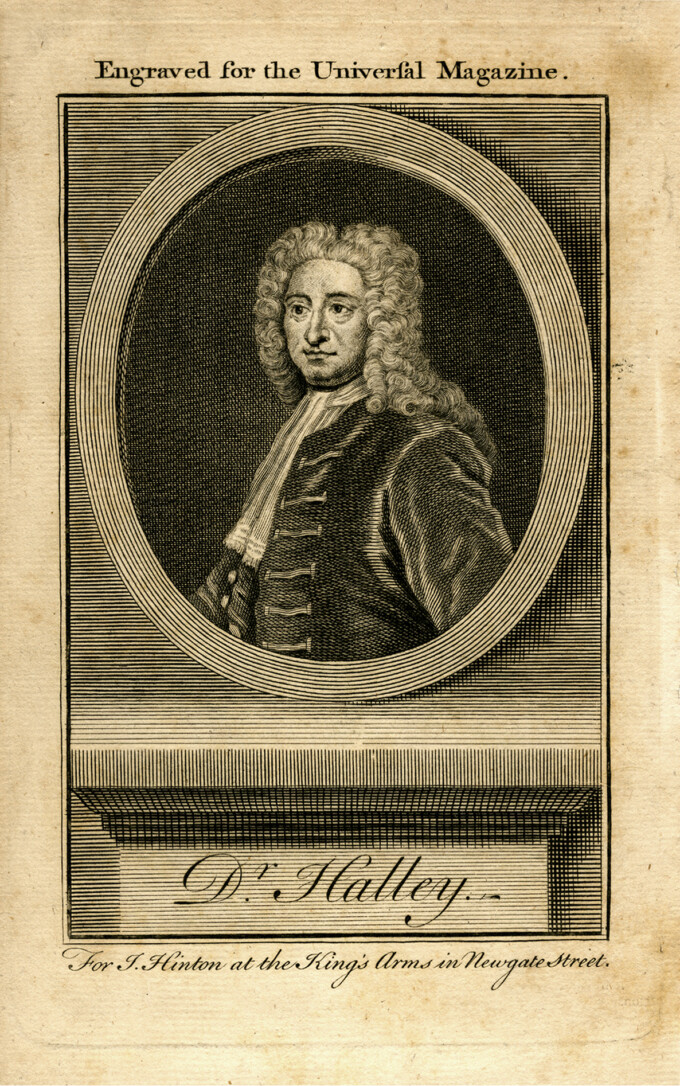 In 1676 Halley sailed to St. Helena, off the west coast of Africa, to study the stars in the southern hemisphere. The resultant star catalogue was dedicated to Charles II, as was the accompanying planispheric chart of the stars. He also included a historical description of existing stellar catalogues, citing the works of Brahe, Flamsteed, Hevelius and Cassini, and also contributed an account of his own voyage to St. Helena.

From 1698 to 1700 Halley navigated the Atlantic as captain of the ship Paramore, to measure magnetic variation, hoping that this might be a means to accurately determine longitude at sea, an age-old problem for mariners. Although this theory was unsuccessful, the observations served as material for his important charts of the Atlantic Ocean, A New and correct Chart shewing the Variations of the Compass in the Western & Southern Oceans as observed in ye year 1700, published in 1701, and his 1704 chart of the world. These were the first printed charts to depict lines of equal magnetic variation in the oceans (isogonic lines, or ​“Halleyan lines” as they were originally termed). His contemporaries, and successive generations, quickly adopted these lines for their world charts,.

In 1702 Mount and Page published A New and Correct Chart of the Channel between England & France with considerable improvements, notable for the inclusion of Halley’s measurements for the tides and currents of the Channel, again rapidly adopted by later mapmakers.

While there are numerous earlier predictive maps of eclipses, Halley’s is the first scientifically based, accurate predictive map of an eclipse, forecasting the passage of the eclipse over England and southern Scotland, accurate to about four minutes. Halley’s reputation was greatly enhanced when he correctly predicted the return of the comet that now bears his name.

In 1728, with Nathaniel Cutler, Halley contributed the text, A General Coasting Pilot to the Atlas Maritimus et Commercialis; Or A General View Of The World published by James Knapton and John Knapton, and a consortium of leading London publishers, illustrated with charts drawn by John Harris, John Senex and Henry Wilson.

Halley’s status was such that his name was frequently used as a puff for publications that he was not connected with, while he was also a popular dedicatee for contemporary maps, but he was also called upon to testify to the worth of maps, notably Henry Popple’s A Map of the British Empire in America with the French and Spanish Settlements (1733).