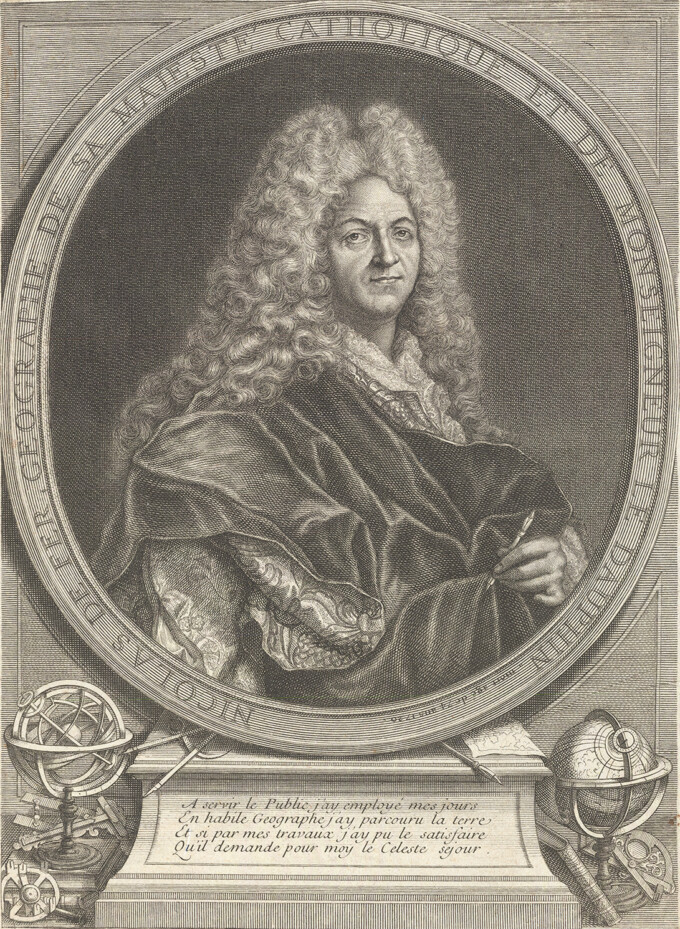 Nicolas de Fer was apprenticed to Parisian engraver Louis Spirinx, and made his first map of the Canal du Midi at the age of twenty-three. His father, Antoine, was also a printer and his business passed to Nicolas in 1687. The fortunes of the firm improved rapidly under De Fer’s management, and he combined cartographic skill with a keen eye for advancement. In 1689 he produced a map of Franche-Comte to honour the Grand Dauphin’s leadership of a campaign to capture new territories in the Rhine, with a blurb saying that the Dauphin’s conquests had lent legitimacy to the campaign. He then became official geographer to the Dauphin.

His output subsequently became closely tied to the French crown’s interests: for example, the Forces De L’Europe ou Introduction a la Fortification, published in 1695, which showed towns drawn as a plan to outline the fortifications designed by the groundbreaking French engineer Sébastien de Vauban, rather than as an elevation or view. He then went on to become the official geographer to Philip V and Louis XIV (both the French and Spanish branches of the House of Bourbon) and eventually, in 1720, the Pope. De Fer published the Atlas curieux between 1700 and 1705, adding plates each time, covering astronomical and geographical subjects. De Fer also published a well-known map of the Americas, with vignettes designed by Nicolas Guérard, including one of beavers creating a dam. This vignette was later used by Herman Moll for his famous ​“Beaver Map” of the British colonies in North America.