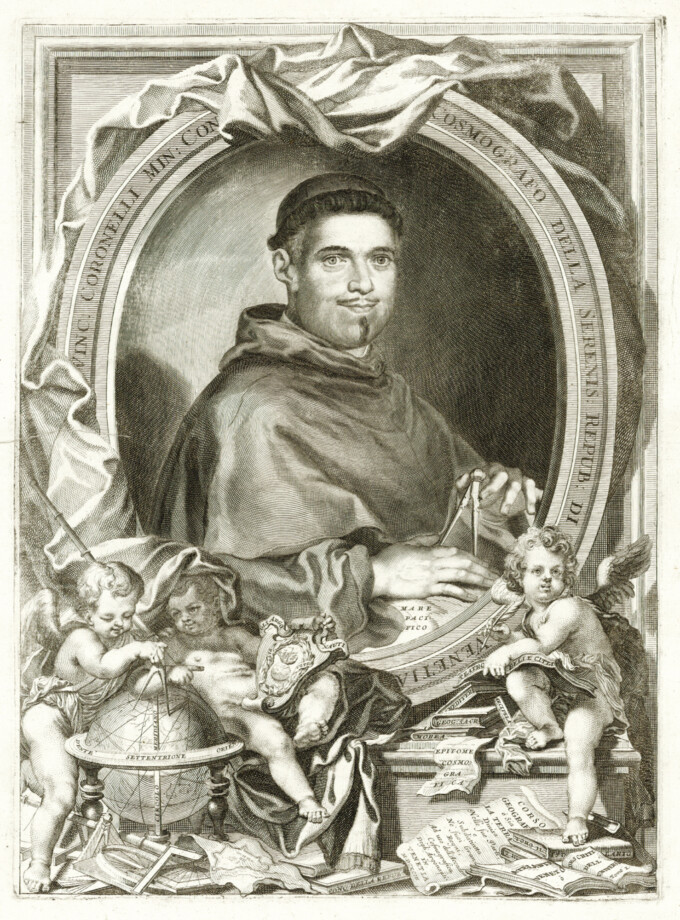 An Italian cartographer and globe maker, Coronelli was apprenticed to a woodcut printer at ten years old, but then entered the Franciscan Order as a novice at thirteen. In 1701 he was made Father General of the Order, but was removed from office by the Pope three years later after complaints from fellow clerics.

Coronelli mainly lived and worked in Venice, but an opportunity arose to make his name when an early commission for two globes for the Duke of Parma brought him to the attention of the Cardinal d’Estrées, who summoned him to Paris to create two huge globes for Louis XIV. They each had a diameter of fifteen feet, and were built with trapdoors so they could be worked on from the inside. He was made royal cartographer to Louis XIV in 1681 as a result, and worked in Paris for two years. He collaborated with Jean Baptiste Nolin, who went on to become the French publisher for all of Coronelli’s work. On his return to Venice, Coronelli was made cosmographer to the Republic, and granted a stipend of 400 florins a year.

Coronelli printed globe gores for his Libri dei Globii as well as producing pocket globes, and his large globe over a metre in diameter was owned by royalty across Europe. He issued the Atlante Veneto in 1691, which was intended to be an extension of Blaeu’s atlas in three parts, covering hydrography and ancient and modern geography. One of the volumes was an isolario. Coronelli was known as a careful scholar, and his work across Europe gave him access to the latest information. For example, he produced the first widely published European map of settlements in New Mexico, America Settentrionale (1688), after being given the information by a former governor of New Mexico, Diego de Peñalosa.

Coronelli also founded the world’s oldest surviving geographical society, the Accademia degli Argonauti, which produced a printed version of the Paris globes. They were named for Jason and the Argonauts, the adventurers who set out to find the golden fleece, and whose symbol was a globe surmounted by a ship in full sail. A list published in the Epitome cosmografica in 1693 reveals that the society counted princes, ambassadors and cardinals amongst its members. They were to receive a minimum of six copper engravings a month, creating a guaranteed market for his productions. Before his death, Coronelli had managed to produce six volumes of what he hoped would be a comprehensive encyclopedia, the Biblioteca universale sacro-profana.