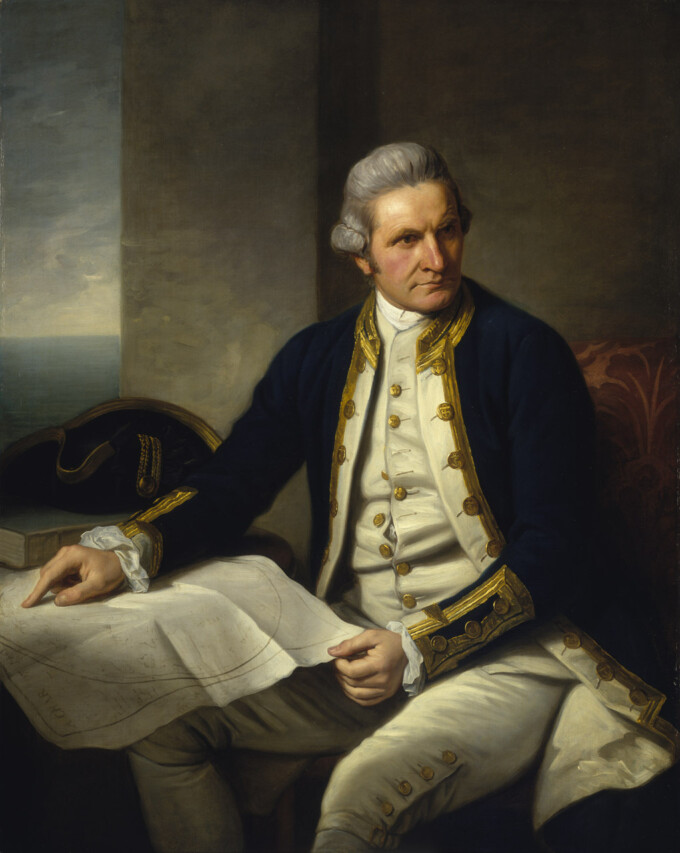 Captain James Cook was a British explorer, navigator and cartographer in the Royal Navy. At the outbreak of the Seven Year’s War in 1755, he volunteered for service in the Royal Navy, and was posted to HMS Eagle. After passing his master’s examination two years later, he served as master of the Pembroke, participating in the naval bombardment of the Fortress of Louisbourg and the siege of Quebec. He showed a talent for surveying and cartography early on, and mapped the coast of Newfoundland in the 1760s aboard HMS Grenville. He produced the first large scale and accurate maps of the area, which were also the first scientific, large scale hydrographic surveys to use precise triangulation to establish land outlines.

Cook’s name was made with the three voyages he made to Australasia. The first, with HMS Endeavour, from 1768 to 1771, was supposedly made in order to observe the Transit of Venus across the sun, but Cook was actually under orders to search for ​“Terra Australis”, the mythical continent thought to lie at the south pole. Sir Joseph Banks, the eminent naturalist, accompanied the exhibition. The voyage took them to Tahiti and then New Zealand: Cook was the first European to set foot there. By 1770, they had sailed west past New Zealand and sighted land, which Cook named New South Wales.

Cook returned to the area three years later, this time with HMS Resolution and Adventure. He reached Australasia by a different route, completing the first crossing of the Antarctic Circle. At Huaheine, they were joined by a native called Omai, who became a member of Adventure’s crew and accompanied them back to England. In 1774 Cook continued through the Pacific from New Zealand, stopping at Easter Island. He was aided this time by new methods of calculating longitude and latitude, and concluded that ​“Terra Australis” did not exist.

Cook’s third and final voyage began in 1776. This time, the expedition sent out to explore a different region. They followed the coast of Australia (then called Van Diemen’s Land) and New Zealand and then sailed into the north Pacific, discovering multiple island groups along the way. Christmas Island was sighted and named on Christmas Day 1777, and on the 18th of January 1778 they sighted Hawaii. Captain William Bligh, the eventual commander of the ill-fated Bounty, was sent to check the depth of the water and thus became the first recorded European to set foot on the island. Cook stopped to reprovision and exchange goods with the islanders, participating in several ceremonies on apparently good terms. They then continued to California and made their way up the coast of America, passing through the Bering Strait before the frozen sea forced then to turn back and head south. Almost exactly a year after they had sighted Hawaii for the first time, the expedition returned to the north coast and stopped in Kealakekua Bay on 17 January 1779.

It has been suggested that the first visit of the voyage to Hawaii had been taken as a divine symbol by the islanders: their return into Kealakekua Bay, a harbour dedicated to the fertility god Lono, had happened to coincide with one of Lono’s religious festivals, and after one of the crew died their divine status was supposedly called into question. It is unclear exactly at what point tensions emerged, but when Cook was forced to return with a broken mast after attempting to leave on the 4th of February, the reception was hostile. The Hawaiians began to steal from the ships, and sparred with the crew. Eventually, they captured a small boat. While Cook was negotiating for its return, his crew opened fire and killed a Hawaiian leader; in the ensuing melee, Cook was killed.