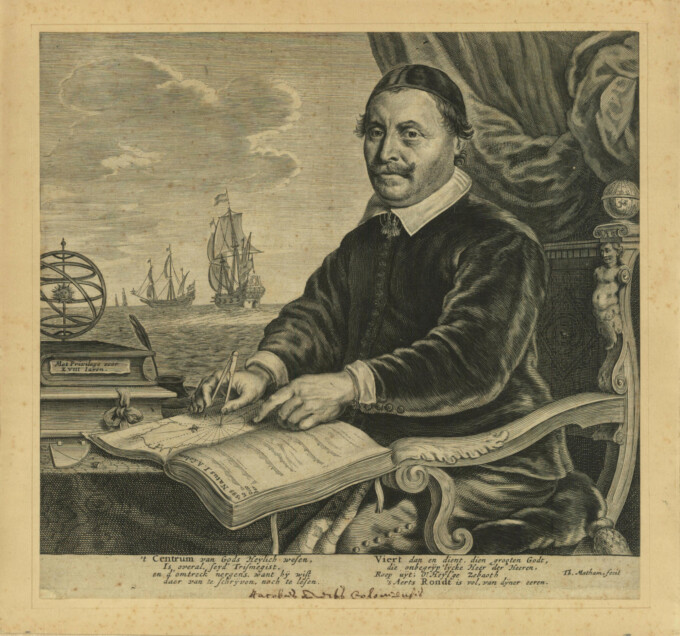 Jacob Colom, printer and cartographer, entered the map market during the Golden Age of Dutch cartography, and had to work hard to stand out amongst the other mapmakers of the day. He began to make globes in the early 1630s, producing three pairs which drew on the work of Jodocus Hondius. He seized his opportunity to enter the market while the houses of Blaeu and Jansson were competing to issue ever larger and more lavish atlases, seeing a niche for an effective working pilot guide. He therefore produced De Vyerighe Colom (1632), or The Fiery Column, playing on his surname. It provocatively claimed to correct the errors found in Blaeu’s ​‘Zeespiegel’. In response Joan Blaeu issued his own folio pilot, the Havenwyser, in 1634, in which he accused Colom of plagiarism. The Havenwyser, however, was a hastily assembled collection of maps taken from Blaeu’s other works, and failed to curb Colom’s success. After the death of Joan in 1638, the house of Blaeu returned to their highly respected Zeespeigel, while De Vyerighr Colom was translated into French and English and ran to thirty-four editions, with the English edition in particular proving immensely popular. He produced an oblong and enlarged version, before creating an entirely new work in 1662, Atlas of Werelts-Water-Deel. Unlike his pilot guide, the atlas covered the whole world and was evidently a response to the sea atlases produced by other Dutch mapmakers.

Jacob’s son, Arnold (1624–1668), followed his father into the business. His Zee-atlas, ofte water-wereldt (1654–58), was one of the largest ever produced in Amsterdam, printed from oversized copperplates. The Zee-atlas was also unique in that the charts were produced specifically for the atlas rather than being repurposed from other sources, and were published as a coherent collection. It contained information from previously restricted charts of the route to the West Indies, and the first detailed map of the Atlantic coast of North America. The Zee-atlas is now very scarce, and does not appear to have been as successful as the elder Colom’s works, perhaps because of its impractical size. Colom fell behind on his rent (his landlord was Nicolas Visscher II, another scion of a mapmaking dynasty) and he gave the plates for the atlas as security; he died without ever redeeming them.