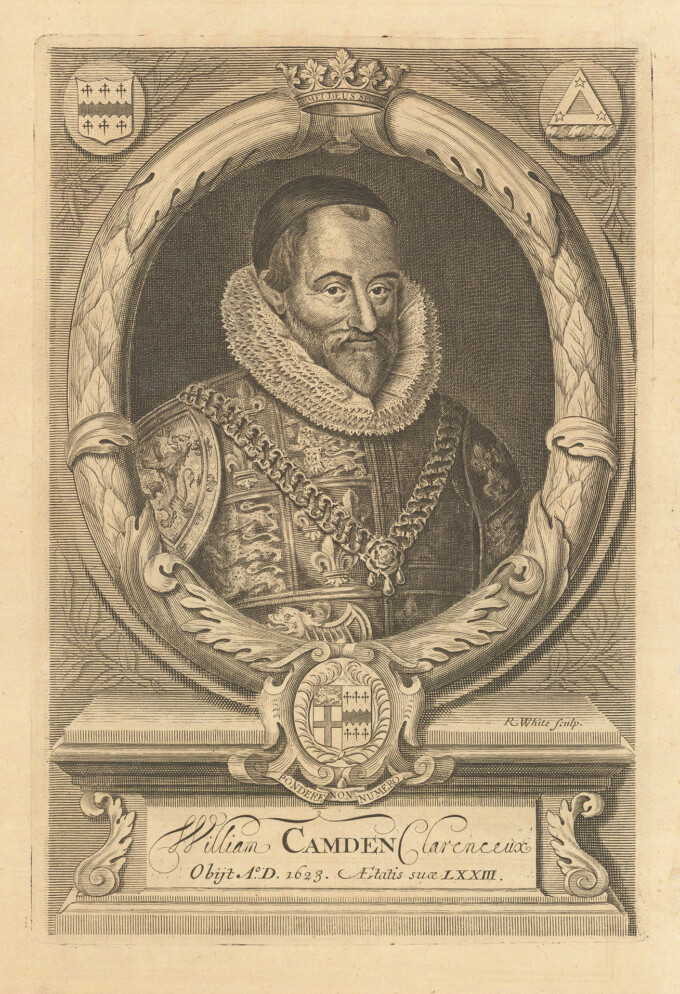 However, it is for his hobby that he became celebrated, not just in his own time but also through successive generations, to the present day. It was his custom to spend his vacations travelling all over England, collecting historical and antiquarian information. In time, he began to assemble this information into a book, published in 1586 as Britannia sive florentissimorum Regnorum, Angliae, Scotiae, Hiberniae chorographica descriptio, with further editions, again in Latin, in 1587 and 1590.

An early deficiency, that Camden himself admitted, was that the book lacked maps; this was unsatisfactorily addressed for the 1600 edition, which added small historical maps of Great Britain, England in Roman times, England in Saxon times and Ireland.

For an expanded edition in 1607, fifty-eight new maps were commissioned, notably a new series of modern county maps, engraved by William Hole and William Kip, from the best contemporary maps, generally those of Christopher Saxton and William Smith, but also Gerard Mercator. These form the earliest series of maps of the individual English and Welsh counties readily available to a collector. In the first edition, the maps have Latin text on the reverse; in later editions of the Britannia in 1610 and 1637, with the text translated into English, the maps have a blank verso.

The book proved enormously popular. A new edition was edited for the press by Edmund Gibson and published in 1695, with a new set of maps by Robert Morden; later editions appeared in 1722, [1730], 1753 and 1772. In 1789, a third version appeared, edited by Richard Gough, with maps by John Cary.

Such was Camden’s status, that his name was used for other histories: Blaeu’s Amsterdam version in 1617 was entitled, Guilielmi Camdeni … Britannia; John Bill’s county atlas of 1626 was called The Abridgement Of Camden’s Britannia, and Richard Blome called his county atlas of 1673, the Britannia.