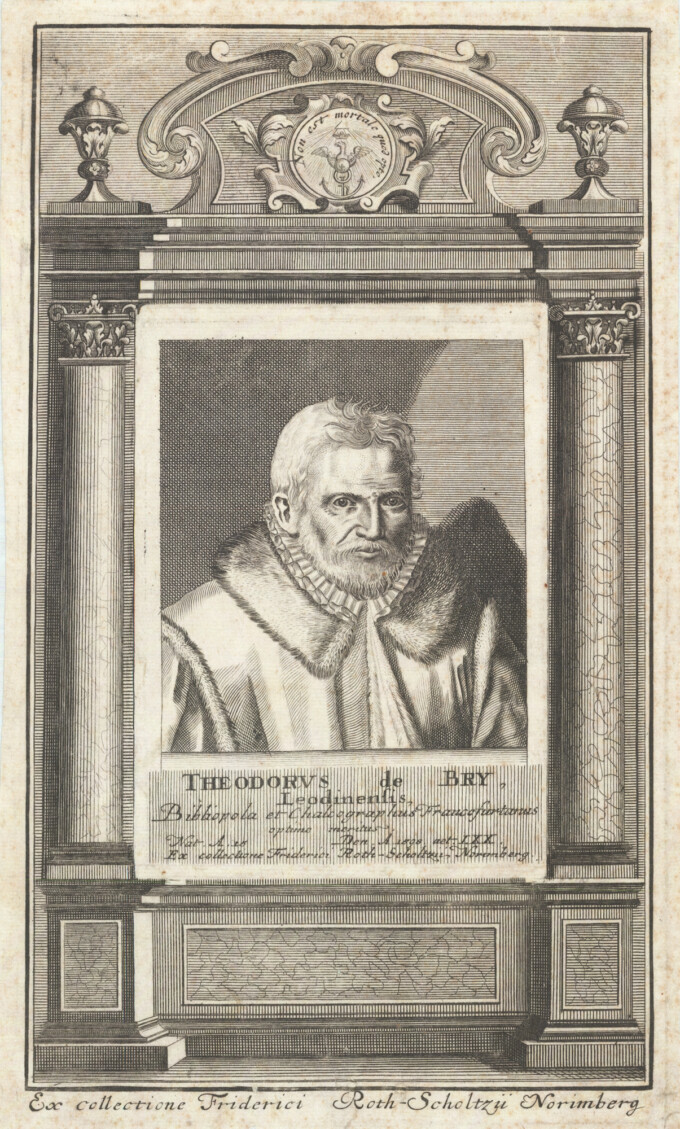 In 1577, the Calvinists in Strasbourg were forbidden to practice their religion in private, which probably contributed to de Bry’s departure. He moved to Antwerp around 1578 where Calvinism was tolerated under the Pacification of Ghent. De Bry became a member of the goldsmith’s guild and the guild of St Luke; other members included Gerard de Jode and Philip Galle. After making these useful contacts, he began to turn his attentions to printmaking rather than working with gold. He appears to have done well, making enough money to visit England in 1584, leaving just before Spanish troops recaptured Antwerp. He may have been going to reunite with exiled relatives, but probably also intended to help translate Waghenaear’s Spieghel der Zeevaert. He collaborated with Richard Hakluyt in 1586 and helped him assemble material for an illustrated collection of travel accounts. He also engraved the plates for Thomas Harriot’s A Briefe and True Report of the New Found Land of Virginia (1588), which emphasised the cruelty of Catholic Spanish conquistadors.

De Bry left England for Frankfurt, where his second wife was from, probably in search of fresh business. He also had contacts there from his time in Antwerp, including Quintin Massys the Younger and the jeweller David van Brussel. In Frankfurt he produced his own collections of travel accounts: the Petits Voyages, or India Orientalis, running to eight volumes by the end of the seventeenth century, including Linschoten’s Itininerario and Willem Lodewyckszoon’s account of Cornelis de Houtman’s voyage; and the Grands Voyages or India Occidentalis, including Harriot’s work and Las Casas’s Brevissima relacion de la destruicion de las Indias. His work was continued by his sons Johann Theodor and Johann Israel and completed in 1634 by his son-in-law Matthäus Merian the Elder, by which time 27 volumes of the work had been issued.

Towards the end of his career de Bry fell out with his sons, complaining that they were attempting to undermine his position in the firm. They, on the other hand, felt that they were not getting any credit for their work (they were not mentioned on title-pages, for example), and left to set up their own imprint.