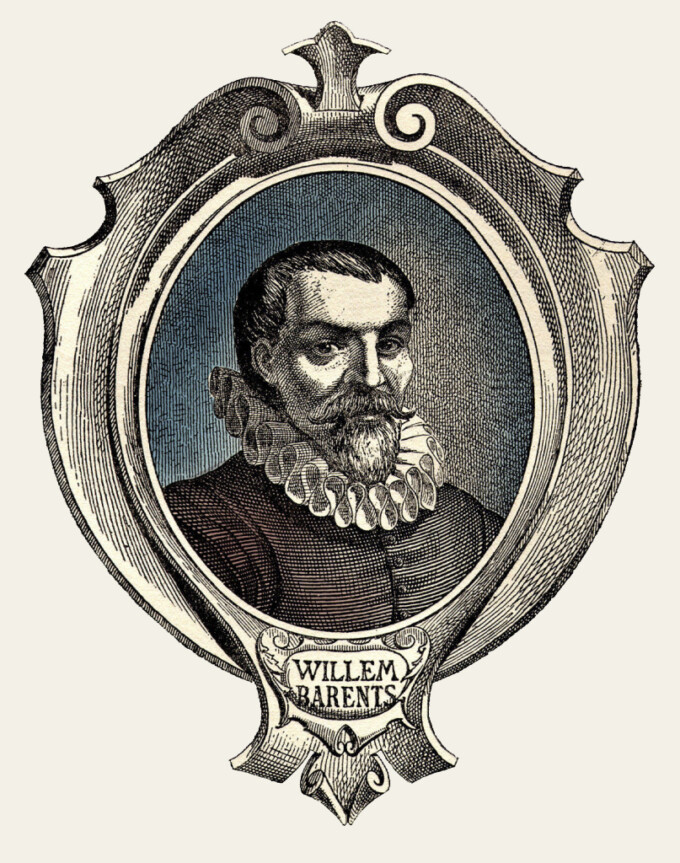 A Dutch mapmaker and explorer, Barentsz was one of the great pioneers of Arctic exploration. His first major work was an atlas of the Mediterranean, which he co-published with Petrus Plancius.

During the late sixteenth century, the Dutch Republic began to trade more and more with East Asia. The established route to Asia, however, was under the control of their enemies, the Portuguese. It was also long and difficult to navigate, and it was thought that a polar route might be quicker. In 1553–54, the English adventurers Sir Hugh Willoughby and Richard Chancellor had attempted to find a route to Asia over Siberia. While their mission was ultimately fruitless, their accounts convinced many in Amsterdam that such a passage could be found, including Willem Barentsz. Barentsz thought such a passage would be viable because he believed that the polar regions above Siberia would be open water, and that prolonged exposure to the sun at the poles would melt any ice there. This assumption would prove fatally incorrect.

Barentsz led three expeditions in search of this passage. The first, in June 1594, sailed from Texel for the Kara Sea. They reached the coast of Novaya Zemlya and followed it north, but were eventually forced to turn back after encountering large icebergs, but not before becoming the first Europeans to document an encounter with a polar bear. In 1595, Prince Maurice of Orange commissioned a second expedition led by Barentsz, which included six ships and a cargo of goods which were intended for trade with China. This expedition was forced to turn back when they found the Kara Sea iced over due to unusually cold weather.

The third and final expedition was in 1596, a last attempt at claiming the reward offered for the discovery of the passage by the Dutch States-General. The expedition discovered Spitsbergen in the Svalbard Archipelago, which would become a centre of the whale trade after their return, and eventually reached Novaya Zembla on July 17. Barentsz’s ship was then stranded by pack ice. They were so confident that the pole would be covered by clear water that a crew member, Gerrit de Veer, recorded in his diary of the voyage that when they first saw icebergs they thought they were swans. The sixteen man crew was forced to winter at the North Pole in a wooden hut made out of timber from the ship. They suffered through every kind of danger: fighting off hungry polar bears; almost dying from eating their livers; and accidentally filling the hut with carbon monoxide after stopping up the chimney for warmth. When spring came and the ice melted, the crew set out in two small boats on June 13, with Barentsz dying from scurvy a few days later. Seven weeks later, the remainder of the crew reached Kola and were rescued by a Russian merchant ship. The crew made it back to Amsterdam in November 1597, and several crew members wrote accounts of the voyage.