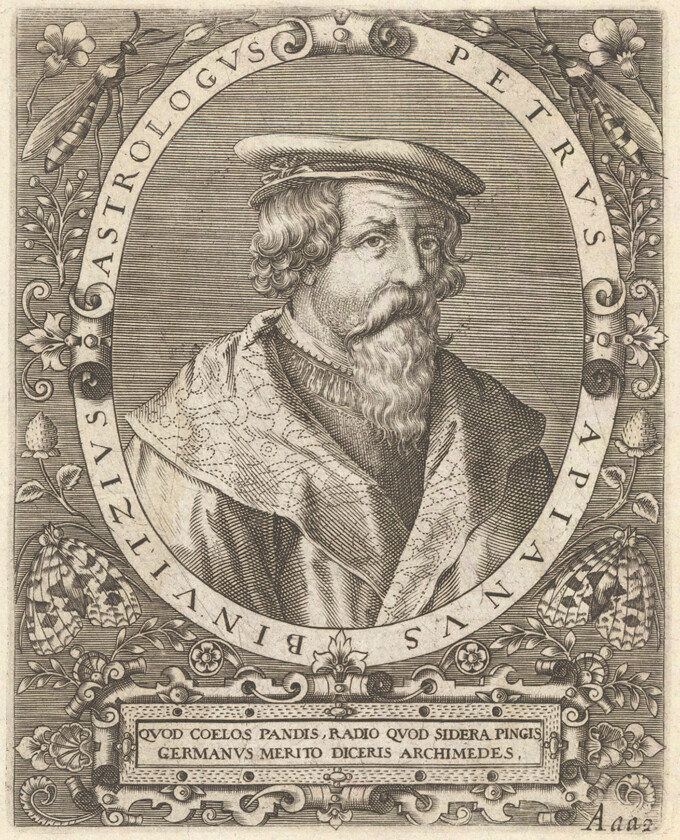 In 1527, the University of Ingolstadt appointed him as a mathematics tutor and official printer. While at Ingolstadt Apianus came to the attention of Charles V, Holy Roman Emperor, who praised his work at the 1530 Imperial Diet and granted him printing monopolies in 1532 and 1534. He continued to publish on mathematical and astronomical themes, including the only known European depiction of Bedouin constellations in his 1533 book, Horoscopion Apiani Generale. In return, Apianus dedicated his most famous work to Charles in 1540: the Astronomicum Caesareum, a comprehensive review of contemporary astronomical knowledge, including theories from the use of solar eclipses to determine longitude to Apianus’s own observation that the tails of comets always point away from the sun. He had noted this trend after an appearance of Halley’s comet in 1531. It was beautifully illustrated and crammed with intricate volvelles, which could be used to calculate everything from eclipses to the hour of a baby’s conception. Apianus was supposedly promised the princely sum of 3000 guilders by the Emperor in return for his work, although there is no record of whether this was ever actually paid. He was, however, made a Reichsritter or Imperial Knight, and eventually made an Imperial Count Palatine.

Apianus continued to work in Ingolstadt until his death, teaching relatively little but producing work on sines, a variation on Pascal’s triangle and manuals for horological instruments