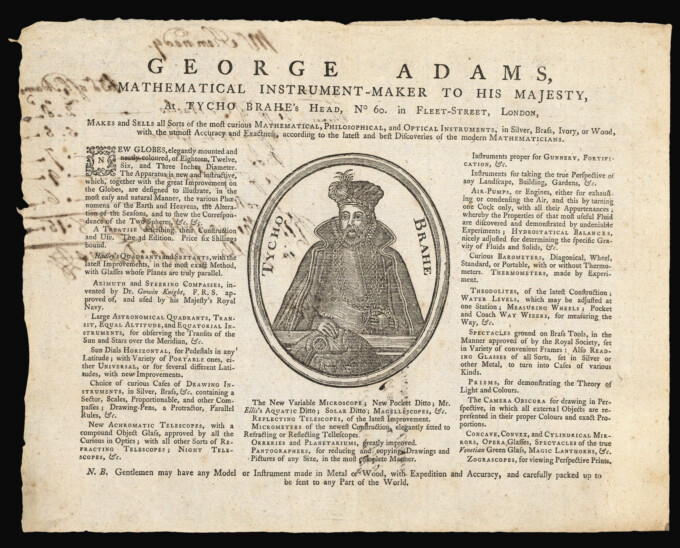 George Adams (c1704-1773), who founded the family firm of leading British instrument makers, was apprenticed in 1718, and set up his own business in 1735 at the sign of Tycho Brahe’s Head in Fleet Street. He began making scientific instruments for the East India Company from 1735, was mathematical instrument maker to the Royal Ordnance from 1748 to 1753, and later instrument maker to the Prince of Wales and King George III. He also supplied the instruments for Captain Cook to observe the transit of Venus in 1769. He acquired John Senex’s plates at some point in the 1760s.

After his death, his widow Ann and elder son George (1750–1795) continued the business, with the younger son, Dudley, who was only ten, being apprenticed to George jnr. George inherited his father’s position as royal instrument maker, and also wrote widely on scientific topics.

From 1788, Dudley Adams (1762–1830) worked independently at 53 Charing Cross, using globe plates and tools that had belonged to his father, given to him by his mother, and he published new editions of his father’s 12- and 18-inch globes. In 1794, possibly as a result of supplying some 28-inch globes for Lord Macartney’s mission to China, he was appointed globe maker to George III. After the death of George jnr, in 1796, Dudley returned to Fleet Street and continued to operate a poor business there, becoming bankrupt in 1817.

The Adams family firm does not appear to have ever designed a pocket globe of its own, but rather acquired the copper plates of John Senex, and thereafter produced versions of his pocket globe to be used in their tellurium. Dudley also acquired the copper plates for a pocket globe of James Ferguson, dating to 1756, which he updated and replaced Ferguson’s name with his own. After the firm’s bankruptcy in 1817 the Ferguson-Dudley Adams globes would be acquired by Thomas Lane.