From the sixteenth to the nineteenth centuries, Europe experienced several periods of cooling known as Little Ice Ages. Many factors have been proposed to explain these dips in temperature, and their effects were likewise manifold. One of the most well-loved and well-documented results was the phenomenon of the Frost Fair. 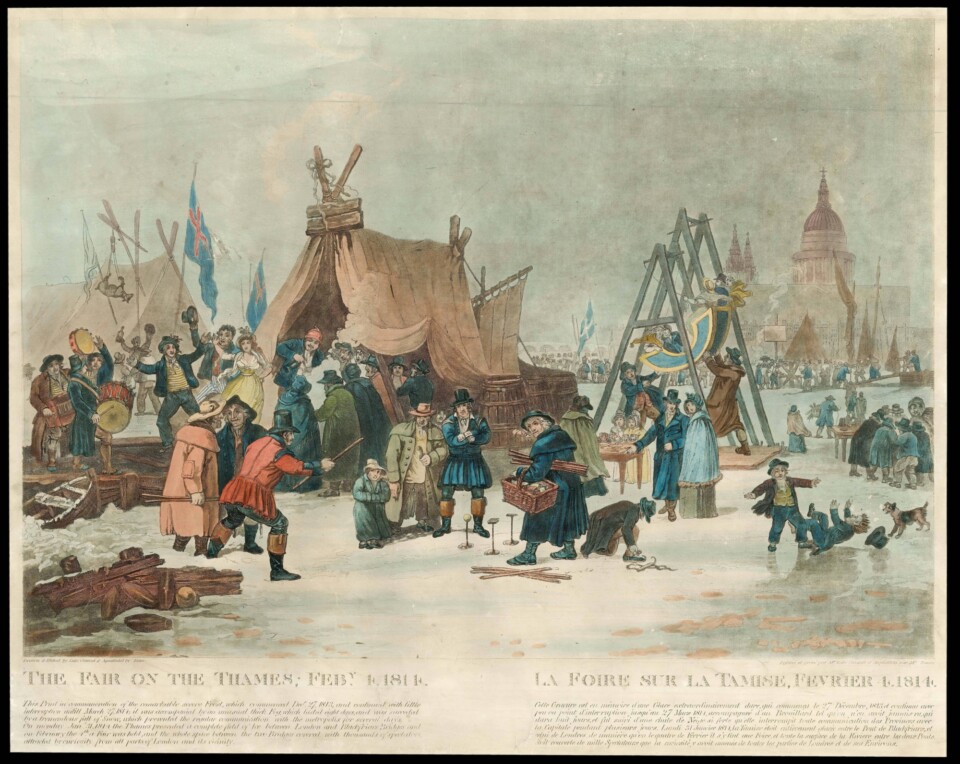 The River Thames has been known to freeze over on several occasions, especially during the Little Ice Ages, upon which the inhabitants of London took to the solid ice for both business and pleasure. The most prominent of these so-called Frost Fairs occurred in 695, 1608, 1683–4, 1716, 1739–40, 1789, and 1814. During the Great Freeze of 1683–4, which was the longest in London’s history and during which the ice reached depths of around 28cm, the diarist John Evelyn recorded the attractions of the Frost Fair:

“Streetes of Boothes were set upon the Thames… all sorts of Trades and shops furnished, & full of Commodities… Coaches plied from Westminster to the Temple, and from several other stairs too and fro, as in the streets, sleds, sliding with skates, bull-baiting, horse and coach races, puppet plays and interludes, cooks, tippling and other lewd places, so that it seemed to be a bacchanalian triumph, or a carnival on water”. 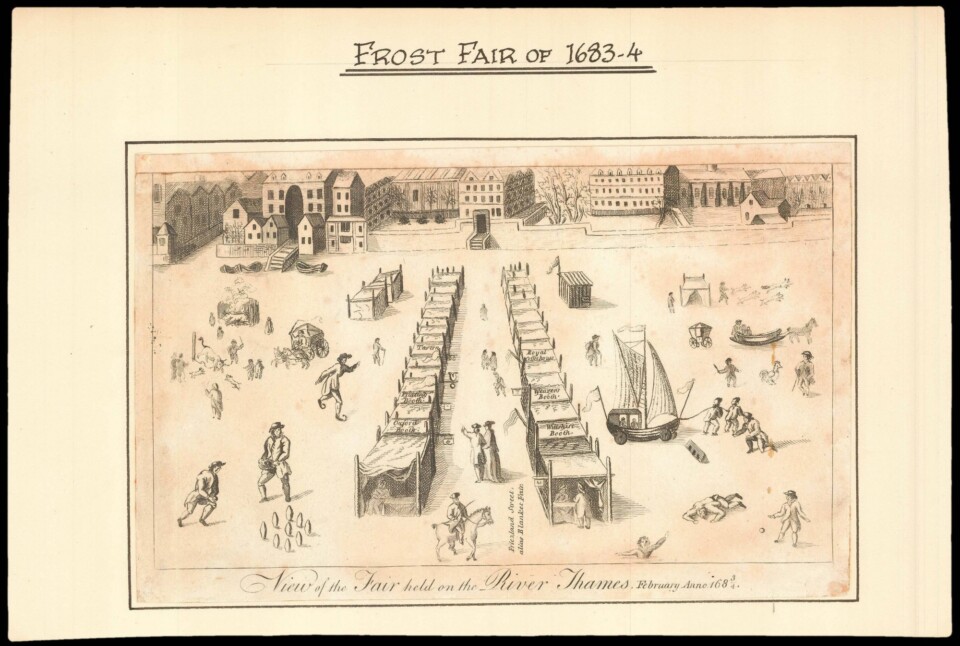 Indeed, many of these activities can be seen on contemporary commemorative prints of the various Frost Fairs. An anonymous view of the fair of 1683–84 (Item 2) shows a carriage being driven across the ice, and a horse pulling a small rowing boat behind it. Two columns of tented booths run north to south across the river, including a ​“tavern” and the ​“royal coffeehouse”. People entertain themselves with food, drink and games of skittles, while one less fortunate attendee appears to have fallen through the ice into the freezing water belong. 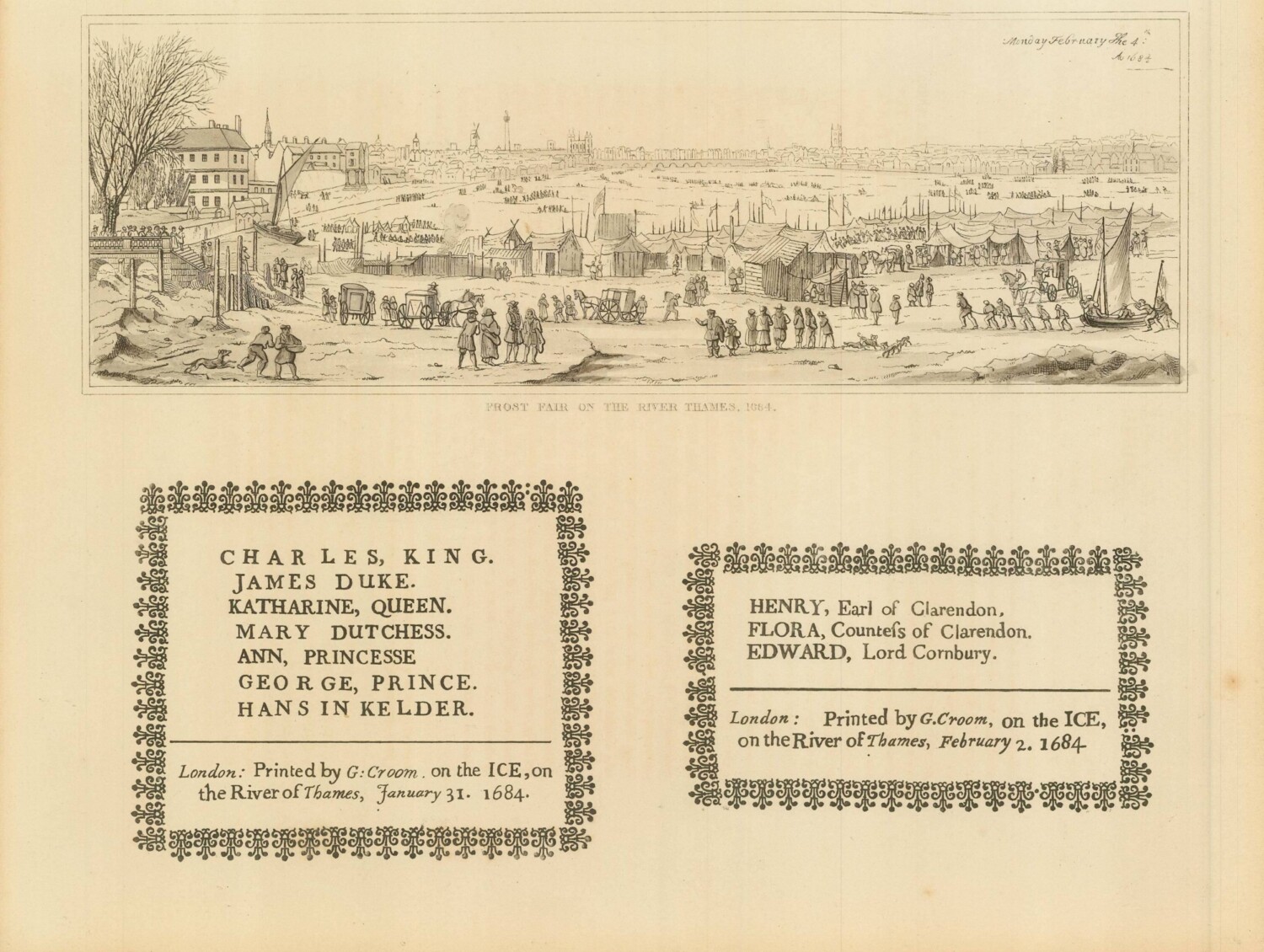 Many of London’s printmakers capitalized on the excitement surrounding the Frost Fair by producing souvenirs of the great event. These included engraved scenes, portraits, poems and, perhaps most prolifically, personalized tickets, which gave attendees the opportunity to commemorate their trip onto the ice with a print bearing their own name. In fact, some printmakers actually installed their presses on the ice; their souvenirs, ​“printed on the River Thames”, were extremely popular. At the fair of 1683–84, one such a memento was purchased by none other than King Charles II, who attended the fair alongside other members of the royal family. The souvenir printed for the King upon the ice (Item 3) lists the names of those in the royal party:

“Hans in Kelder” is not in fact a name, but a toast frequently drunk to the health of pregnant women, in this case to the King’s pregnant niece, Princess Anne, who would later become Queen Anne.

Fifty-five years later London was hit with another severe winter; in the October of 1739, easterly winds spread frosts across the British Isles. A more intense cold set in on Christmas Eve, with severe frosts persisting day and night until February 17, 1740. Over the new year, temperatures reached ‑10 degrees centigrade in the capital. The diary of George Smith, one of Queen Anne’s proctors, from 1740 records that the ​“Thames froze over in 4 days, storm of wind 48 hours (30th Dec) Some people walked over the Thames (1st Jan) Frost continued till February 1st, when a thaw began in day, frost returning each night. Ice all gone in Thames upward but not broke about London (Feb 11th) Ice beings to run in Thames (13th Feb) Ice broke in Thames (17th) Ice gone at London (23rd)”. 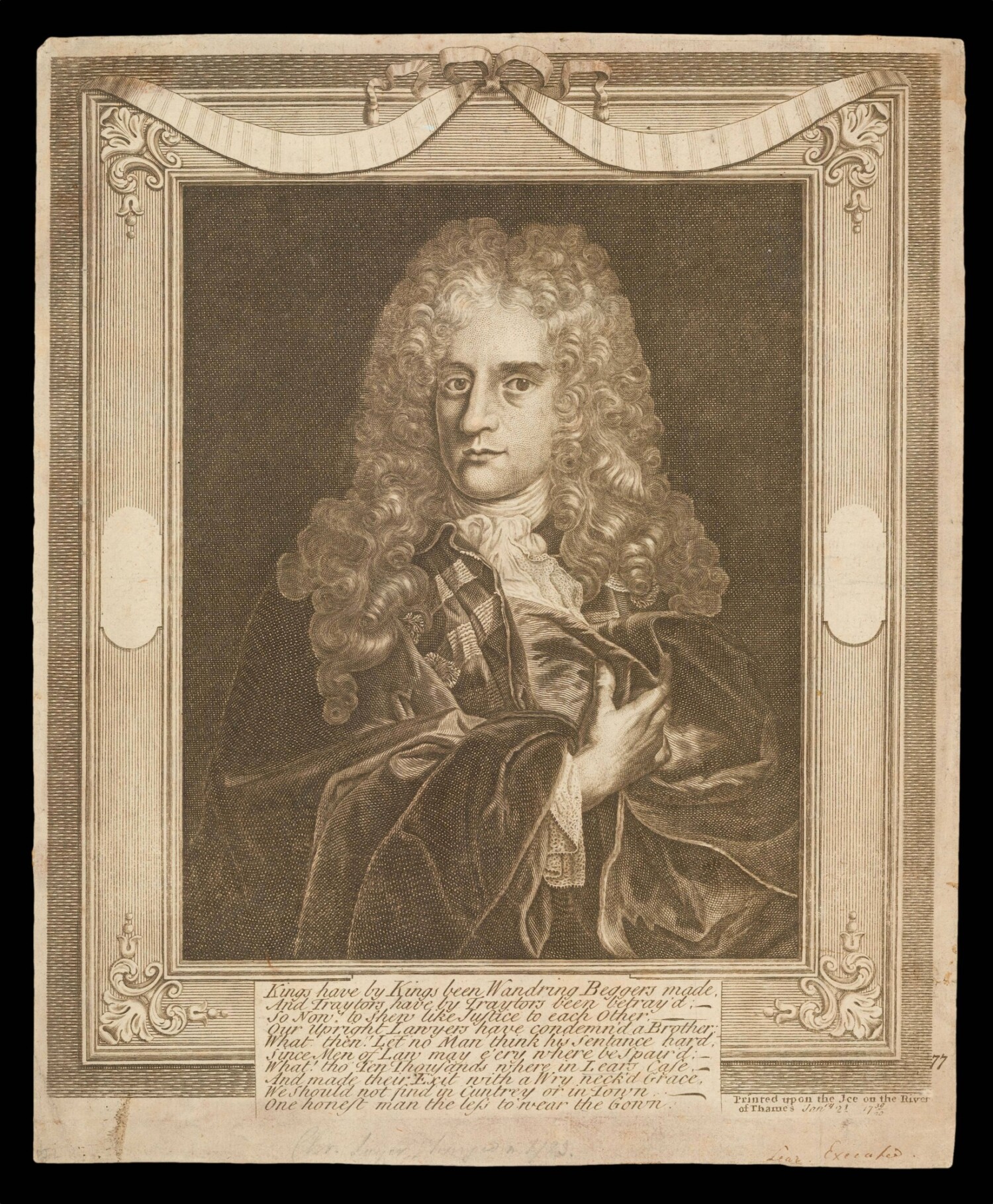 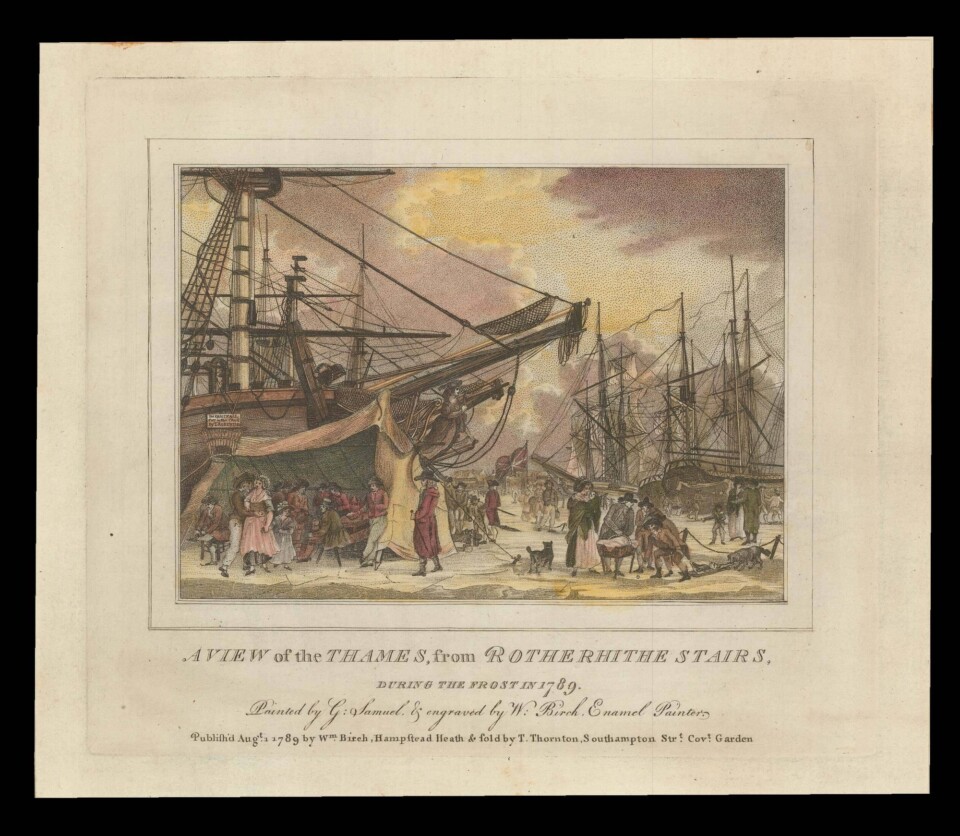 Later in the eighteenth century the Thames hosted another large Frost Fair. The fair of 1789 saw vendors and entertainers set up all manner of stalls on the ice, from puppet-shows to pubs. As shown in William Birch’s view (Item 5), one gingerbread seller placed a sign beside his booth reading ​“no shop tax nor window duty”, in sardonic reference to William Pitt the Younger’s infamous tax regime. 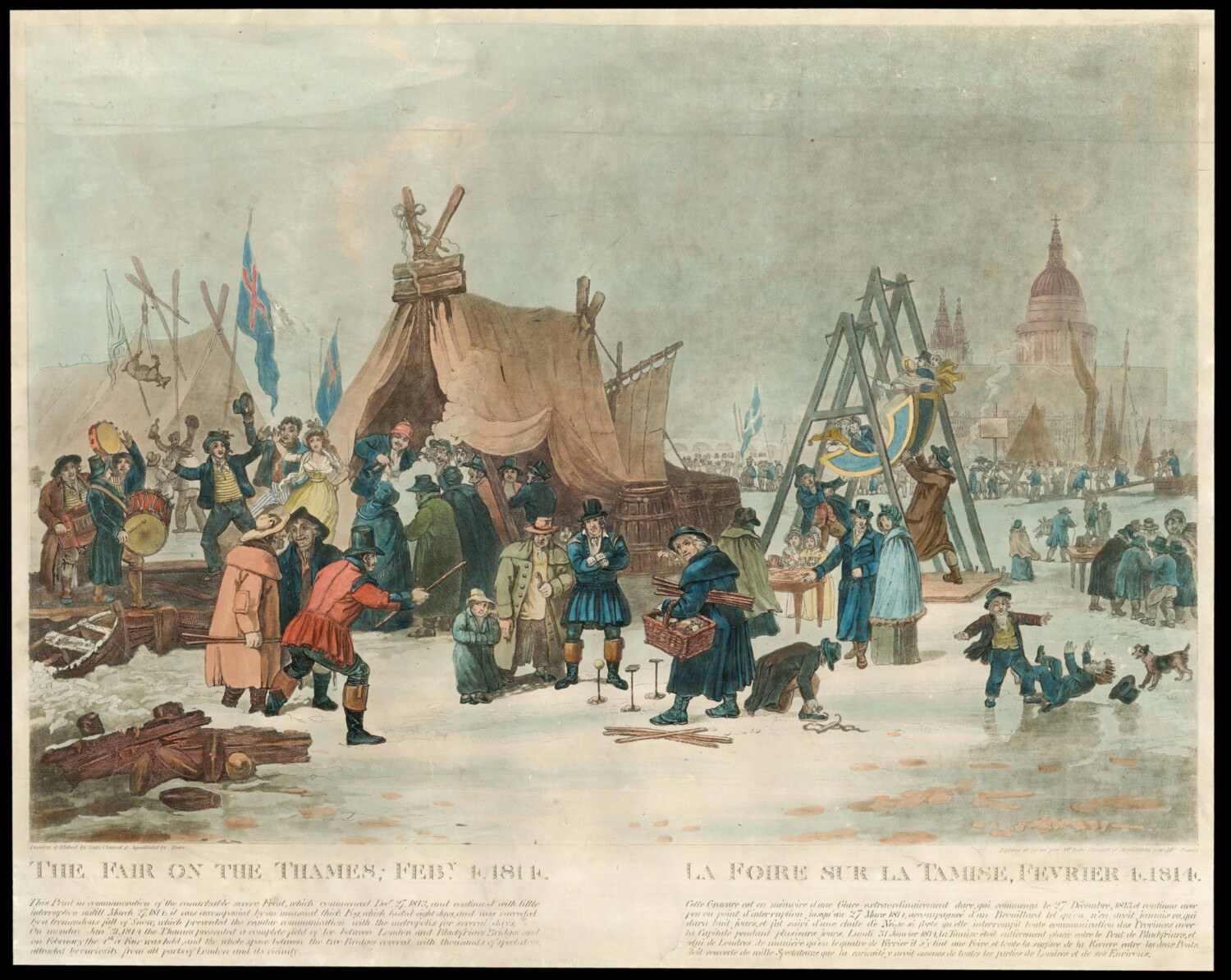 The last Frost Fair took place between Blackfriars Bridge and London Bridge for four days at the beginning of February 1814. There was feasting, drinking, and activities such as nine-pin bowling and dancing. One of the highlights included an elephant being led across the river! Luke Clennell’s etching of the event (Item 6) perfectly captures its carnival atmosphere, showing the wide range of the activities and entertainments enjoyed by all, from a band to a barbecue, fortunetelling to fairground rides, and even one of the many printing presses that worked on the ice to issue souvenirs.

People from all walks of life seem to be attending, with some dressed in suits and top hats, others in shawls and caps. Some punters are even enjoying a ride on swing boats, a fair-ground attraction which gained popularity during the Victorian era. George Thompson’s view of the same Frost Fair (Item 7) likewise shows the ice full of tents and stalls, as well as crowds of people. The latter are slipping, sliding, and swinging, perhaps due to the ​“Good Gin” available at one tent, while another advertises a ​“sheep to be roasted whole”. 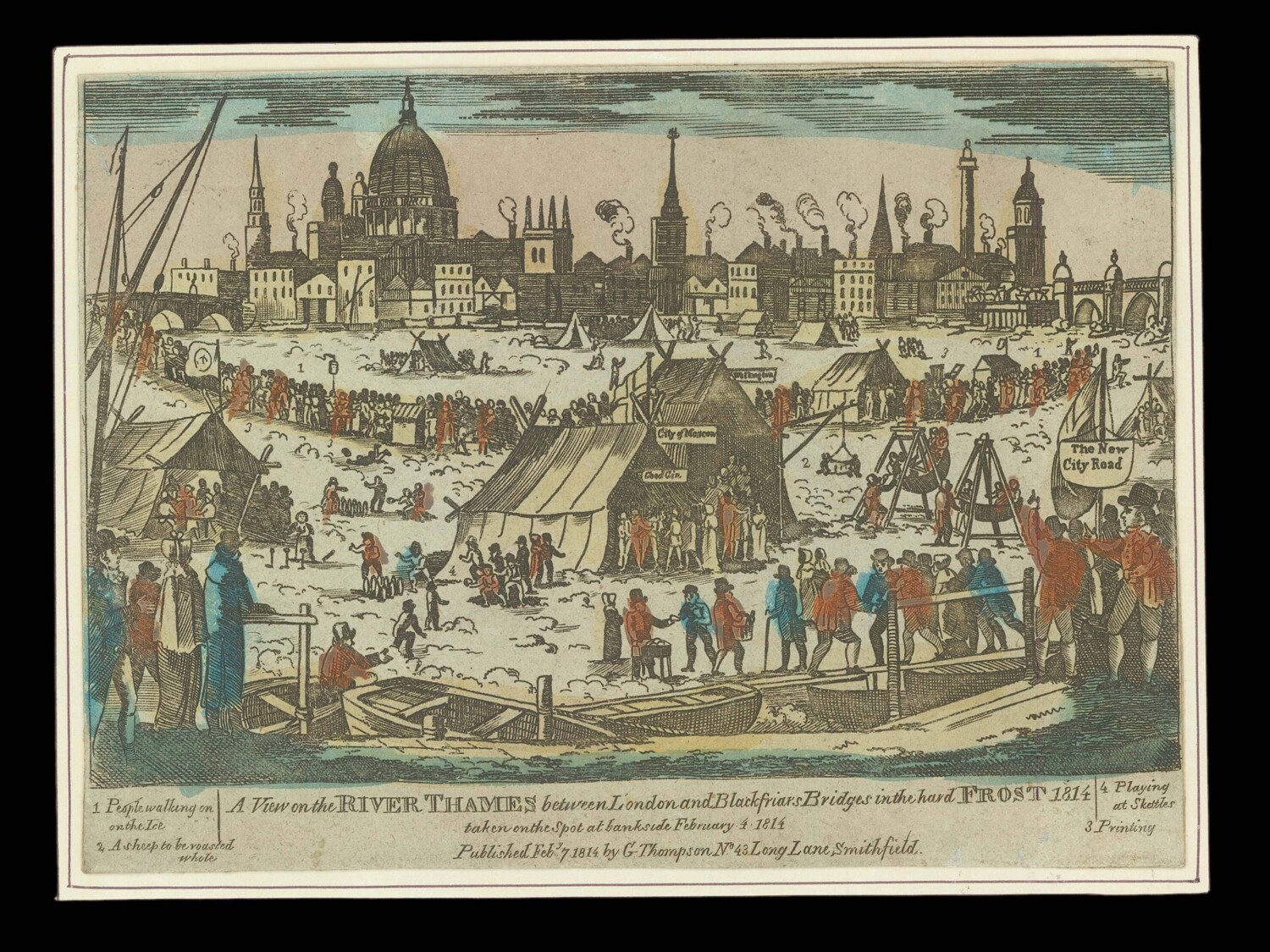 (Item 7) THOMPSON, G[eorge], A View on the River Thames between London and Blackfriars Bridges in the hard Frost 1814, London, 1814.

The Frost Fair of 1814 also saw an unprecedented number of printers taking to the ice to produce souvenirs. One of these enterprising printmakers was George Davis, who published a short book, ​‘Frostiana; or A History of the River Thames In a Frozen State’. The main product of the ice-born printing presses, however, were commemorative tickets often containing short verses, such as Items 9, 10 and 11: 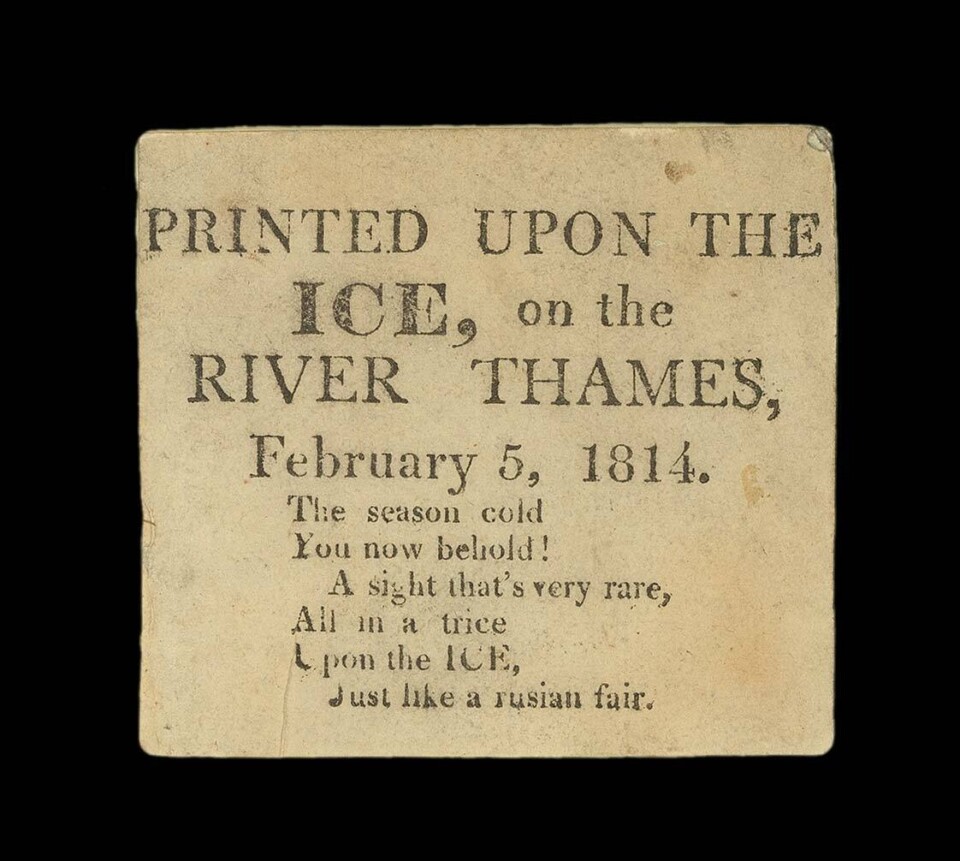 All in a trice 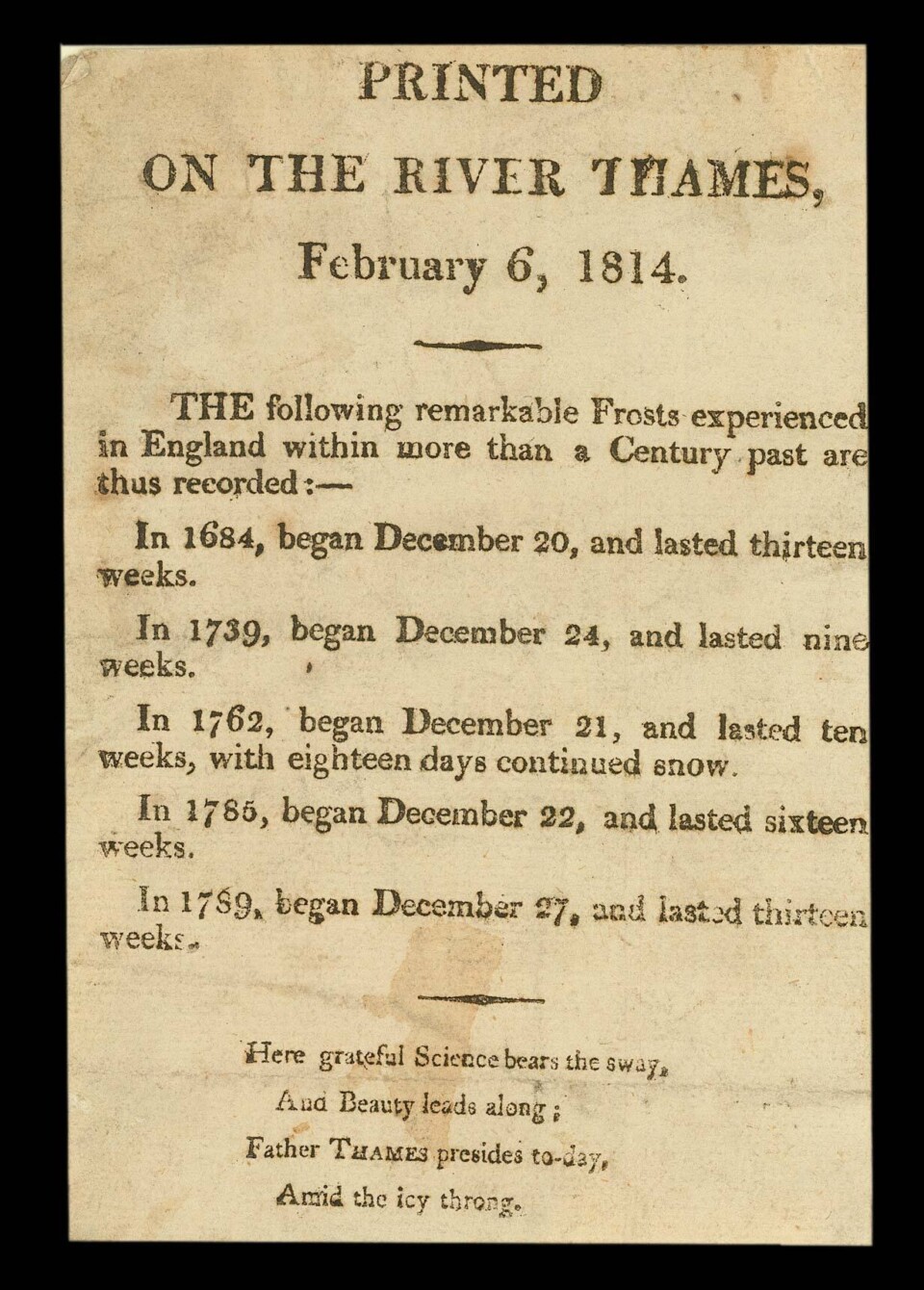 And Beauty leads along;

Amid the icy throng”. 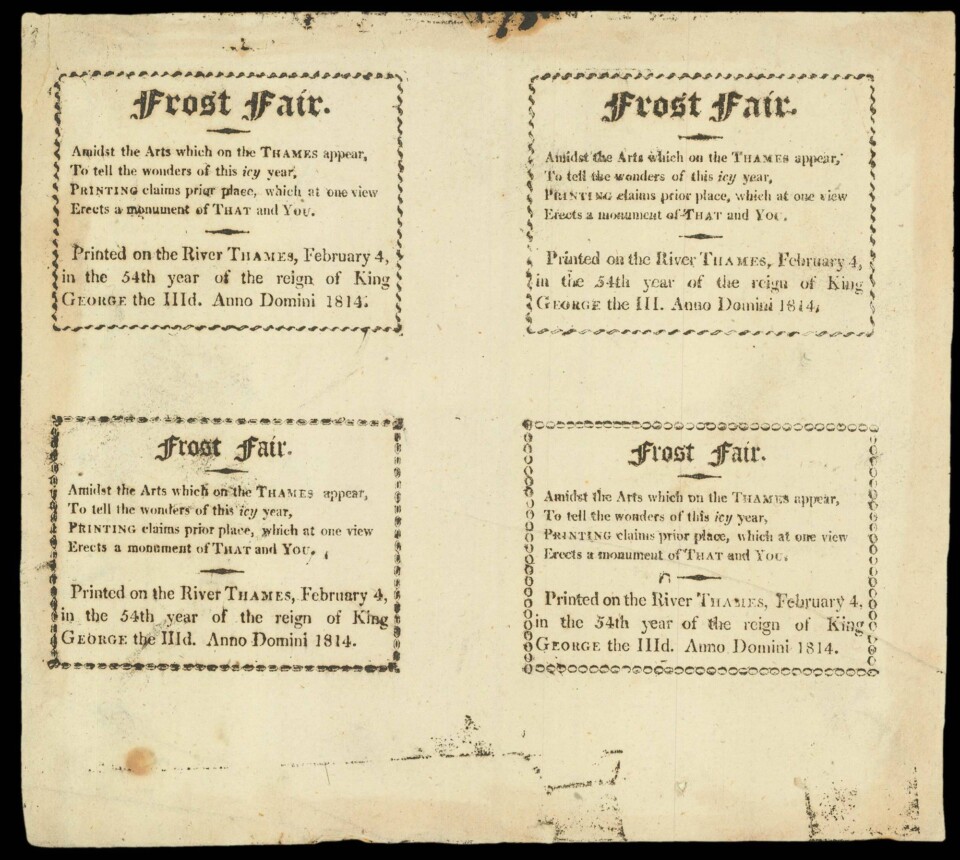 “Amidst the Arts which on the Thames appear,

To tell the wonders of this icy year,

Printing claims prior place, which at one view,

Erects monument of THAT and YOU.

Printed on the River Thames, February 4, in the 54th year of the reign of King George the III. Anno Domini 1814”. 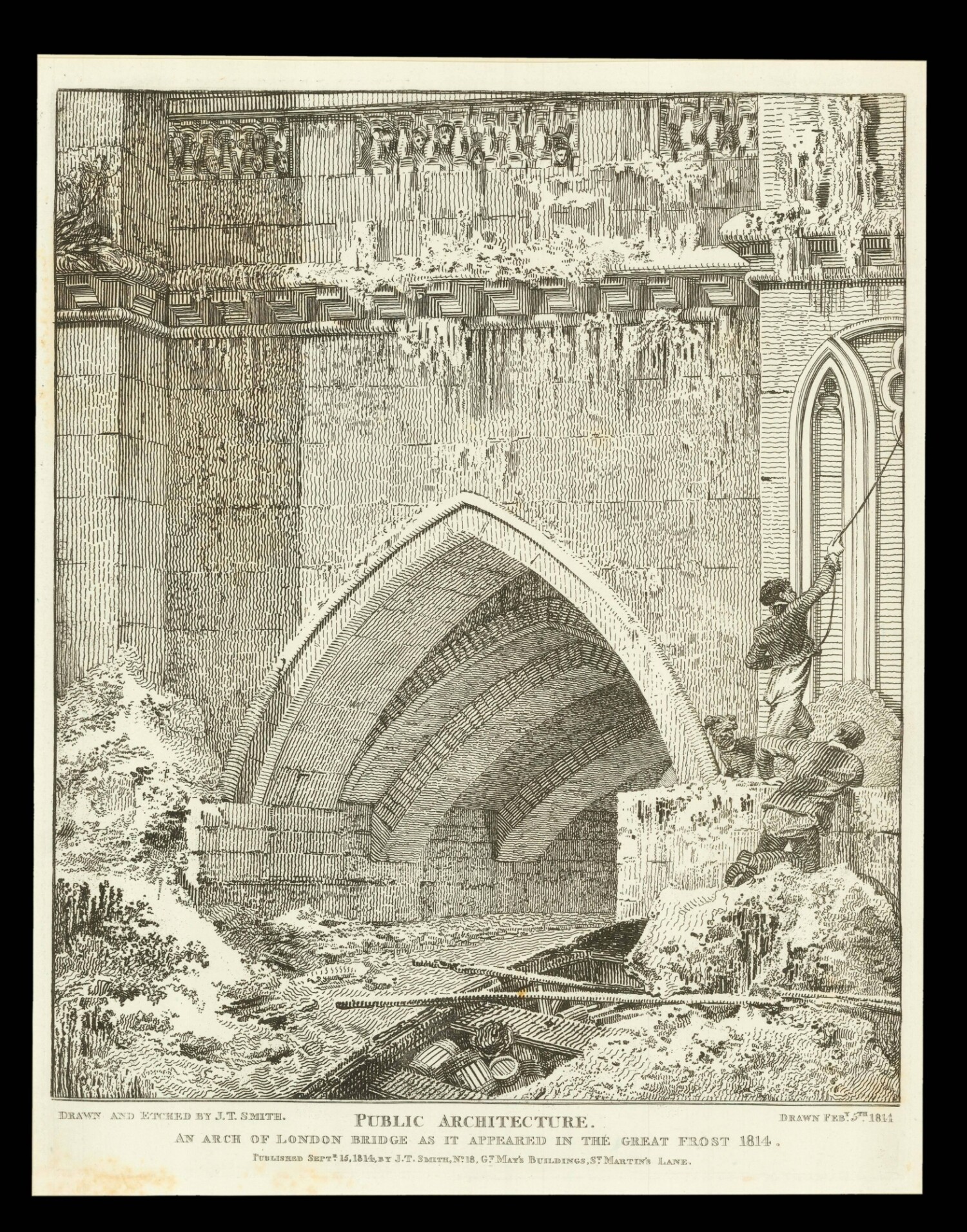 Alongside the merriment of the Frost Fairs, however, the freezing of the Thames presented challenges to those who would use the arterial waterway for purposes other than drinking, dancing and general carousing. John Smith’s iconic image of the frozen waters beneath London Bridge (Item 12) shows the ​“King’s Lock” of London Bridge from the east, beneath which two men and a dog are scrambling up from a boat submerged in ice, since the river has completely solidified. Worse still, the Frost Fair of 1789 witnessed a tragedy when the melting ice dragged away a ship which was anchored to a riverside pub in Rotherhithe. As reported in ​‘Gentleman’s Magazine’ at the time:

“The captain of a vessel lying off Rotherhithe, the better to secure the ship’s cables, made an agreement with a publican for fastening a cable to his premises. In consequence, a small anchor was carried on shore, and deposited in the cellar, while another cable was fastened round a beam in another part of the house. In the night the ship veered about, and the cables holding fast, carried away the beam, and levelled the house with the ground, by which accident five persons asleep in their beds were killed.”

The fair of 1814 was brought to an end when the ice began to break up on February 5th, tragically resulting in several deaths. Since then, on account of the milder climate, the replacement of the Old London Bridge with a new one with wider arches, and the incremental embankment of the river, the Thames has not frozen over so completely as to allow another fair to take place upon it. 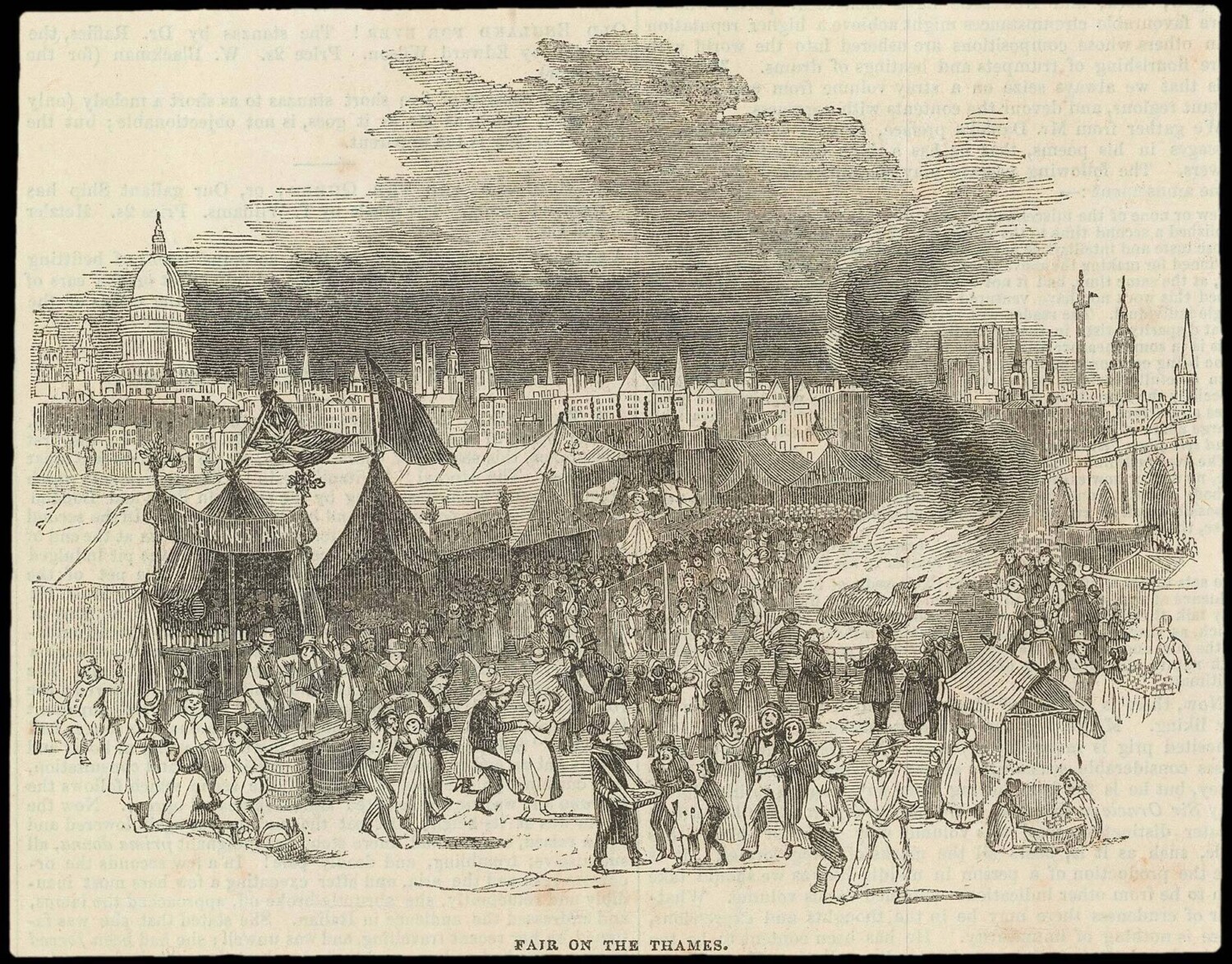 A clipping from the ​‘Illustrated London News’ (Item 16) commemorated the final Frost Fair on its thirtieth anniversary: ​“It was in this eventful winter that Napoleon retreated from Moscow, amidst the horrors of cold, desolation, and famine; and it was in the winter of this year that Winter, ​‘canos hirsute capillos’, shook the icicles from his beard over the inhabitants of London, and took old Father Thames into custody… The frost set in with a cold, piercing easterly wind, on the 27th December, 1813, and lasted, with little intermission of its intensity, until the 5th of February following. So hard was the surface of the river for several weeks, and so thick the ice, that a long road, or rather street, which was called the City-road, was formed from Blackfriars’-bridge to old London-bridge,… On each side of this long street were booths of all descriptions; dancing, eating, drinking, smoking, &c. were going on without intermission all day and all night. There were printing presses, inter alia; and songs, poems, and descriptions setting forth the multitudes who thronged to see the wonders. Bambling-booths, shows, and so forth were in abundance; in short, the whole river represented an immense Saturnalia, an enormous Bartholomew fair. There were fires blazing, sausages frying, fiddlers tuning, horns blowing, and groups of dancers in incessant employment and requisition,…” (Illustrated London News).

As Europe began to emerge from the Little Ice Age, and temperatures globally began to rise, ice became an ever-rarer sight on the Thames. The last time that the river froze over completely was in 1963, and although some Londoners took the opportunity to walk, skate and even cycle on the river, it was no longer deemed viable to host an entire fair on the surface.

To learn more about the Thames Frost Fairs

These prints feature in the 2021 Christmas Special episode of the Antiques Roadshow, where the book specialist Fuchsia Voremberg discusses the wintry phenomenon with presenter Fiona Bruce.