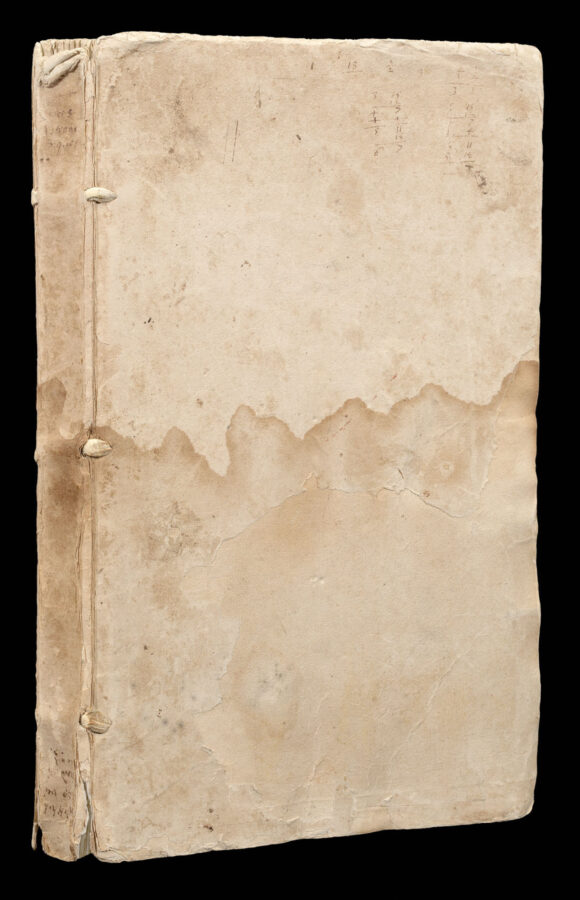 Two manuscripts produced by members of the remarkable Cassini family, who dominated French cartography and astronomy for a century and a half. The first provides a unique window into the long process of the first full survey of France. It was an undertaking of unprecedented accuracy that would reduce the known area of the country by 30,000 square kilometres, prompting Louis XV to exclaim ​“You have cost me more territory than all my enemies!” when confronted with the results. The second is a collection of notes on astronomy, recording the leaps in scientific understanding made in a time when the dominant theory of a geocentric universe was seriously challenged for the first time in a millennium.

Cassini I was born in Liguria and studied at the Panzano Observatory under Giovanni Battista Riccioli and Francesco Maria Grimaldi. He eventually became professor of astronomy at the University of Bologna. In 1669, he moved to France on the invitation of Jean-Baptiste Colbert to become the first director of the new Paris Observatory. His achievements there included discovering the gap in Saturn’s ring system, now known as Cassini’s division; observing the shadows of Jupiter’s satellites on its disk; and creating a famous lunar map, the first to show the moon’s surface in detail from accurate observations. He also began the great survey of France that would consume four generations of his family, into which the first manuscript provides a fascinating insight.

The project to create a new, detailed, and highly accurate map of the whole of France began in the early 1660s. It was the brainchild of Jean- Baptiste Colbert, who was minister of finance from 1665 to 1683 during the reign of Louis XIV. He wanted a detailed map of the whole of the royal estate to improve its management and potential revenue. In order to achieve this he turned to the newly formed Académie de Sciences, and principally to the services of Cassini I and the surveyor and astronomer Abbé Jean Picard. Picard and Cassini I completed a map of Paris and a coastal survey before the project was stalled through lack of funds and the loss of its figurehead with Cassini I’s death. It would not be until 1733 that Philibert Orry, Louis XV’s controller general, would order Cassini II to resume the triangulation of the entire nation. In 1746, with the framework complete, Louis then charged Cassini III with fleshing out the survey’s bare bones.

Cassini III was, like his grandfather and father before him, director of the Paris Observatory. He is most famous, however, for his contribution to the great map of France.

Cassini calculated that the survey would take 18 years to complete, and consist of 180 maps at a cost of 4,000 livres each. Unfortunately, his estimates were woefully optimistic. By 1754, only two maps had been published, and in the same year Cassini received the news that Louis was to end the financing of the survey. This forced him to turn to the private sector, and with Louis’ backing he set up the Société de la Carte de France. This, combined with a public subscription in 1758, and a royal proclamation of 1764 demanding that unsurveyed regions contribute to the survey’s costs, kept the project financially secure. Although Cassini III had secured the map’s future, he would not see its completion. In 1784, at the age of 70, he died of smallpox. The completion of the great project was left to his son, Cassini IV, and Maraldi II.

The first manuscript records the results of the project. It is written in several different hands, most probably Cassini III himself and several assistants. It appears to be a working version of, or preparation for, the book Cassini III published in 1784 to accompany the 180 maps produced as a result of the survey, ​‘Description Géométrique de France’. It begins with a description of the methods used to conduct the survey, and continues with pages full of measurements, diagrams outlining the processes of triangulation and taking bearings, and lists of place names. Subsequently, there is a series of 60 manuscript maps, with the triangulation network used to create each one drawn in red. Each map is followed by pages of measurements, giving the length of the sides of each triangle and the triangulation points used. The final section deals with methods used to map various different areas of France.

The detail of the records confirm its status as ​“the first general map of an entire nation based on geodetic and topographical measurements … [which would] transform the practice of mapmaking over the next 150 years into a verifiable science” (Brotton).

The second manuscript was made by Jacques Philippe Maraldi (Maraldi I) while working with his uncle, Cassini I, although some are in the hand of Cassini himself, his son, Cassini II, and Maraldi’s nephew, Jean-Dominique (Maraldi II). It was almost certainly Maraldi I, however, who collated them all. At the beginning of the book, Maraldi I writes that his aim is to collect some ​“astronomical thoughts of his uncle’s”, and also to avoid losing his loose notes. He began to fill the book on 26 February 1708.

The date of the manuscript is crucial because it gives a tantalising glimpse of a change in Cassini I’s scientific convictions towards the end of his life. In the early stages of his career in Italy, he had conformed to the dominant Ptolemaic geocentric theory of the structure of the universe. Ptolemaic theory held that the sun and planets orbited the earth; Copernicus and other thinkers suggested that in fact the earth and other planets orbited the sun. This was prudent, given that Galileo Galilei had spent a decade under house arrest while Cassini was a teenager for endorsing heliocentrism. Although he then moved to the more liberal environment of Paris and some of his later work has been interpreted as hostile to geocentrism, he was careful not to commit himself publicly. However, a sentence in pages dealing with the motion of the planets reads ​“We [Cassini I] have demonstrated from the immediate observations, and from the theories that these represent, that the planets from the apogee to the perigee increase their actual speed in reciprocal proportion of the variation in distances from the Sun”, lending implicit support to the heliocentric theory. Furthermore, the same pages contain a description of Johannes Kepler’s theory of the movement of planets around the sun, and statements supporting the work of Galileo, Johannes Kepler and Constantine Huygens. This suggests that, despite his public silence on the matter, Cassini’s true sympathies lay with heliocentrism by the beginning of the eighteenth century.

The notebook begins with Cassini’s work on the measurement of the distance between the earth and the sun. As he lays out his methods for this calculation, he also expounds on the ways in which astronomical phenomena – the seasons, the passing of day and night, the phases of the moon – have had an important influence on human culture. He speaks about ancient calendars, quoting classical authors, and emphasising the link between astronomy and chronology. Cassini then explains how in his own time the regular movements of the stars can signal divine intention to humanity, because of their regularity; they have had the same function since the time of their creation. The book goes on to deal with innovative contemporary astronomical concepts, including the use of celestial co-ordinates, Kepler’s Law, equinoxes, and the distance between the stars.

The author of most of the notes, Maraldi I, was born in Perinaldo in 1665. His mother, Angela Caterina, was the sister of Jean-Dominique Cassini, who was already teaching at the University of Bologna and making his name as an astronomer. Very little is known of Maraldi’s younger years, but his uncle presumably took some interest in him, as he summoned Maraldi to Paris when he was 22. Cassini had moved there in 1669 to take up the position of the director of the newly built Observatory. Maraldi lived with his uncle in the Observatory, assisting him in his observations and and accompanying him on field trips. Maraldi himself aimed to create a star catalogue, the completion of which took nearly his entire life and cost him his health; unfortunately, he was forced to give up when only a few circumpolar stars were missing and none of his co-workers ever sent the manuscript to be published, so it remains essentially unknown. Maraldi was very important to his uncle, who requested his help on the expedition to trace the Paris meridian for the Cassini map of France, and asked Maraldi to represent him in the meetings which decided the reform of the Gregorian calendar. After his uncle died, Maraldi led a solitary life, completing his star chart and studying the behaviour of bees, which he farmed in glass hives in the Observatory’s garden. He died in 1729.

Although writings relating to the Cassini or Maraldi families occasionally come on the market, collections of this size and scope are very rare. The vast majority of their manuscripts and correspondence remains in the Biblioteca Maraldiana. Institutional Cassini manuscript holdings are mainly letters or practical ephemera: the Bibliothèque de l’Observatoire de Paris holds some of Cassini I’s astronomical observation records, and the Smithsonian has some correspondence on his pension and orders for the Observatory. The astronomical manuscript, written by a pupil, a noted scholar in his own right, under Cassini’s direct supervision over a long period, provides an unmatched insight into the thoughts of one of the most famous scientists of his age. As far as we can discover, the only other similar work ever offered was a much shorter personal notebook of Maraldi’s nephew, Maraldi II, at Sotheby’s in 1967. Most of Maraldi’s books and papers are lost or missing; outside the Biblioteca Maraldiana, only the Bibliothèque de l’Observatoire de Paris has a manuscript copy of his ​‘Observations de la Comète’.

The manuscript regarding the great survey of France appears to be the first attempt by Cassini III to systematically collate the methods used and information gathered by himself and his forebears. The Bibliothèque National holds some papers on the triangulation of the north of France and the Cornell Library holds tables of projections which may have been used for the survey, but there is no institutional example of a collection this comprehensive regarding the great survey. A working copy of ​“Description Geometrique” was again offered at Sotheby’s in 1967, but it contained only one manuscript map, was substantially shorter and was dated c.1745, suggesting that it was a later, condensed version of the information laid out in the present example. 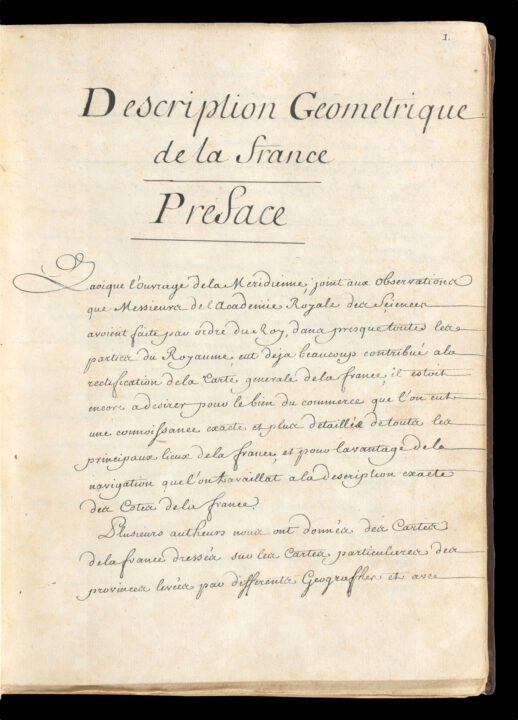 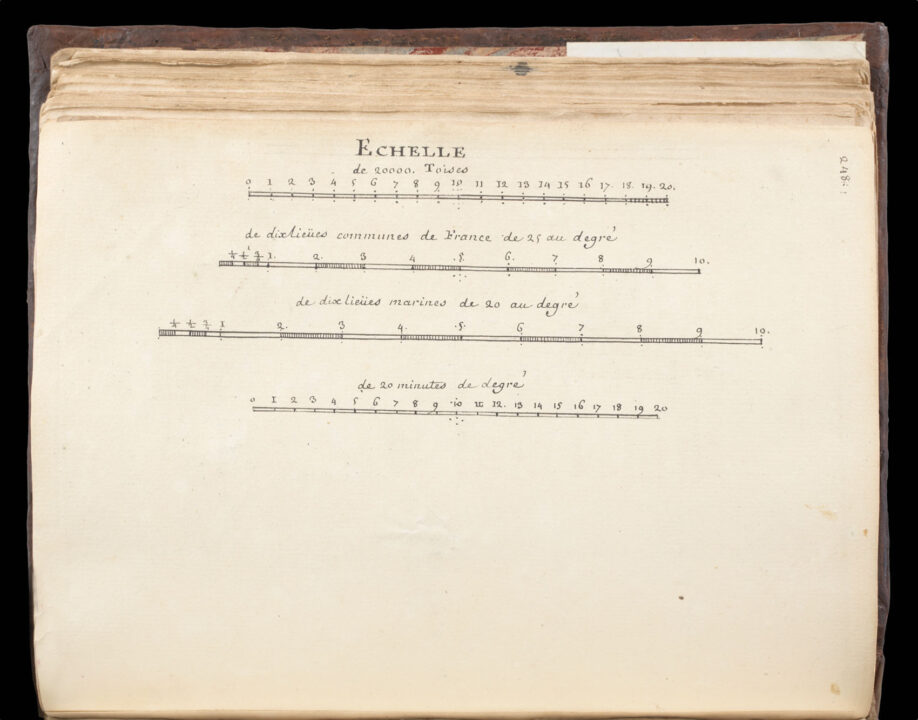 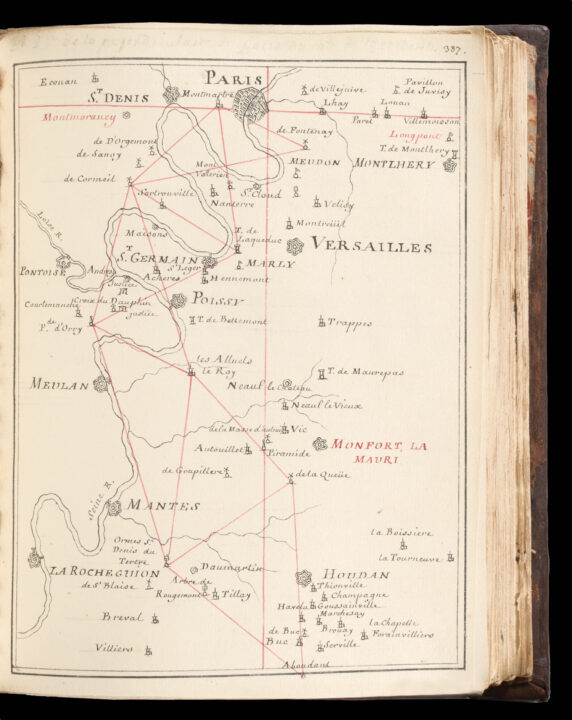 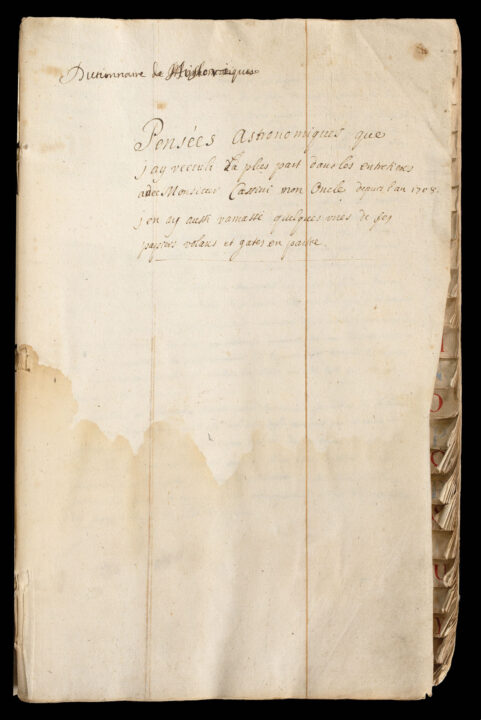 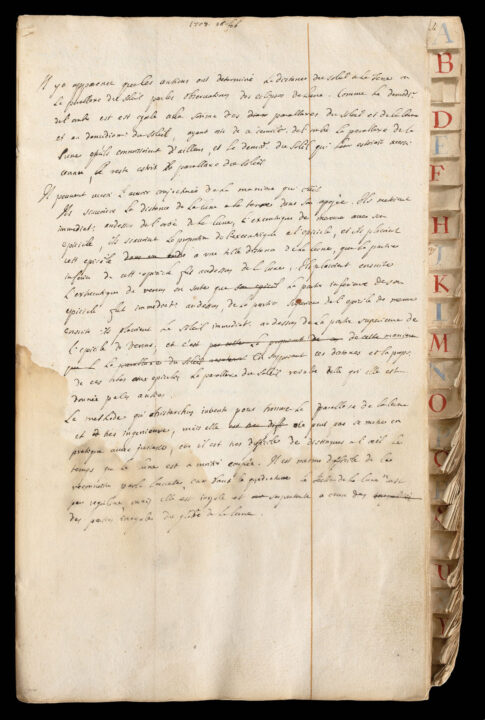 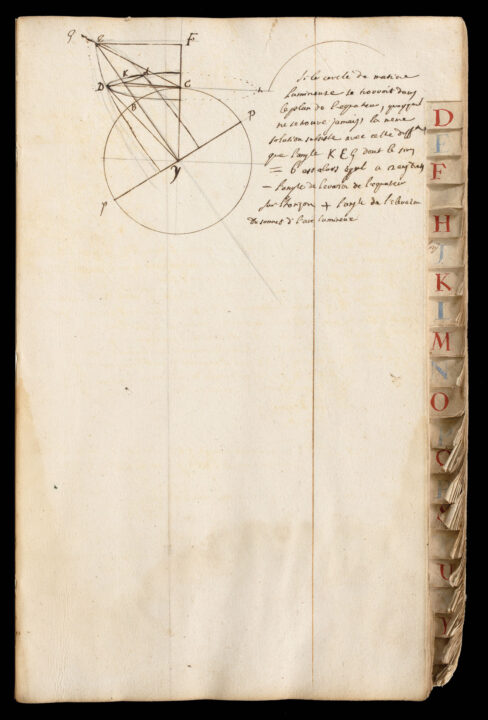 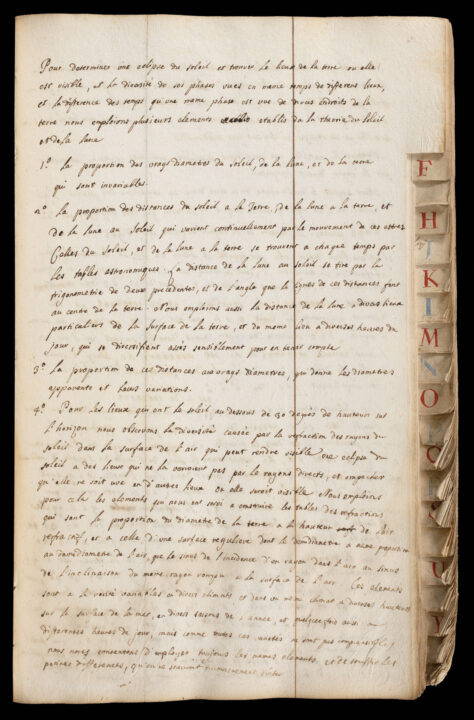 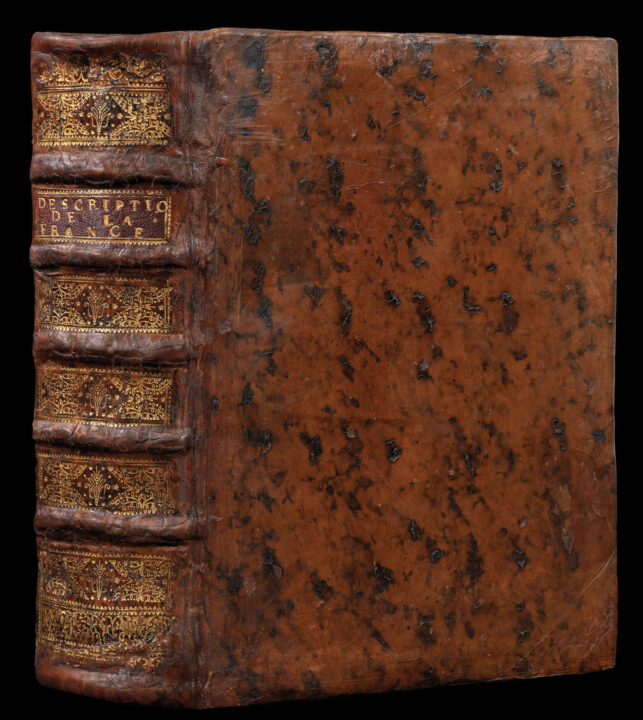 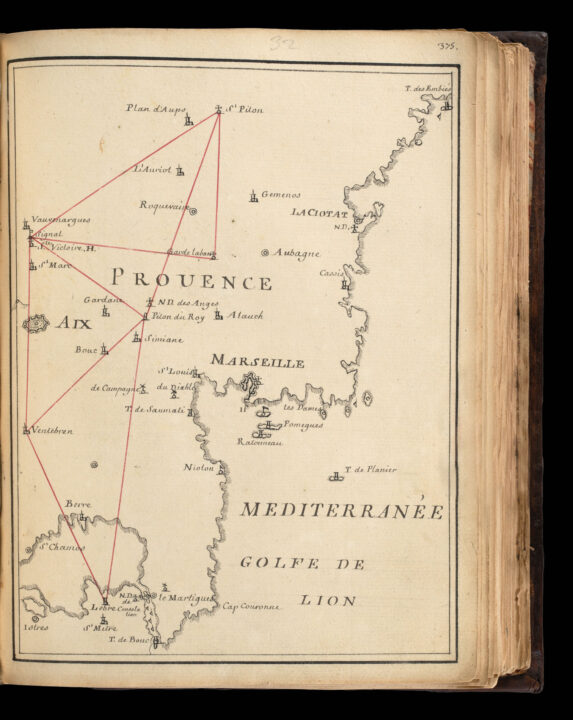 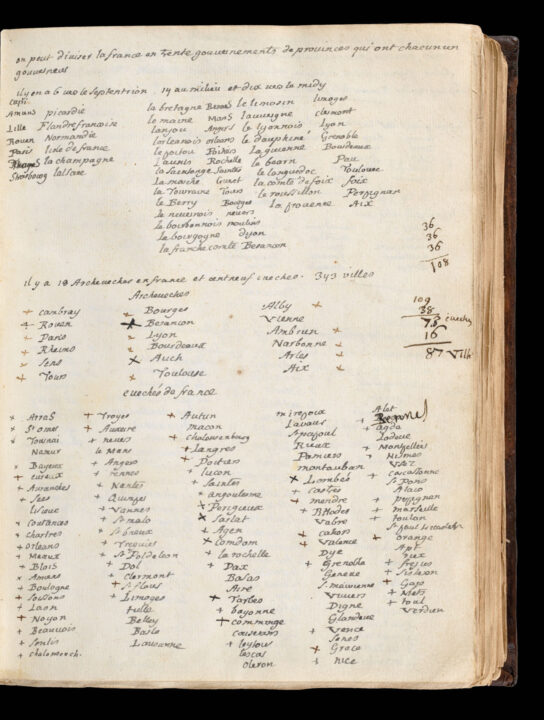 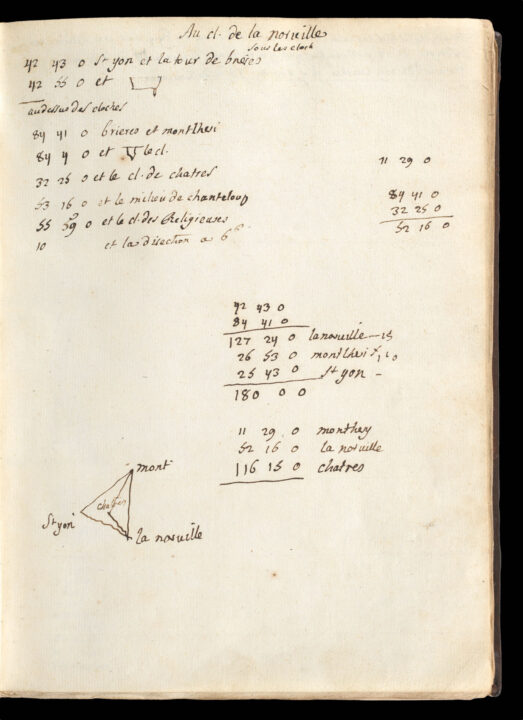