The search for La Perouse

The first edition of this extensive account with splendid and important illustrations of birds, plants, native peoples, and artefacts by the naturalist and surgeon Jacques Julien Houton de Labillardière (1755–1834), who accompanied the search for the famous French navy officer and explorer Jean-François de Galaup, Comte de la Pérouse (1741–1788?), whose expedition had vanished in Oceanea after having left Botany Bay in January 1788.

The rescue expedition was sent out under Rear Admiral Joseph Bruni d’Entrecasteaux and Jean-Michel Huon de Kermadec. On 25 September 1791 the ship left Brest and followed La Pérouse’s proposed course around the Cape of Good Hope to Tasmania, via the islands northwest of Australia, while at the same time making scientific and geographic discoveries. In May 1793 the expedition arrived at the island of Vanikoro in the Santa Cruz archipelago. D’Entrecasteaux thought that he saw smoke signals from several elevated areas on the island, but was unable to investigate and forced to leave due to the dangerous reefs surrounding the island.

The expedition twice circumnavigated Australia, but was beset by difficulty throughout. D’Entrecasteaux died in Batavia, and news of the French Revolution fragmented the crew and ended the expedition. The papers of the voyage fell into British hands but were returned under a flag of truce in 1796; Labillardière was the first to publish his account.

Although the expedition was not successful in finding traces of La Pérouse, it ​“made several important contributions to geographical knowledge, and the investigations of the naturalists were of special value” (Ferguson). Of particular cartographic interest were the surveys of the coasts of Tasmania, Tonga, New Caledonia, the northern coast of New Guinea, and the south-western coast of Australia, and the atlas contains important views of these areas by the artist Piron. Also of interest are the 14 botanical plates engraved by Redouté and the first printed depiction of a Black Swan. The vocabularies of the languages spoken at Malay, the Friendly Islands, New Caledonia, and Waygiou, printed in the Appendix, add much to the study of linguistics, and Labillardière’s account of the Tongans is among the best contributions to the ethnology of that people. 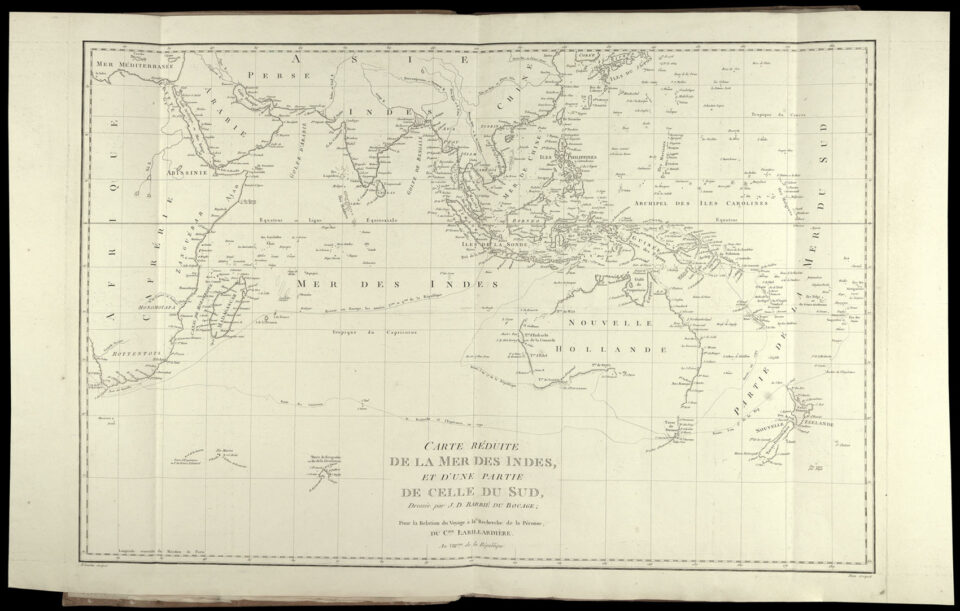