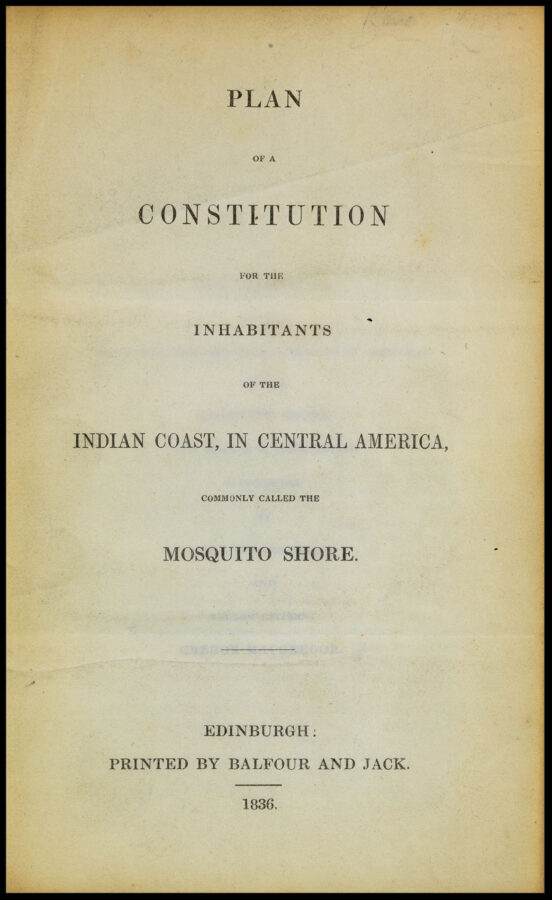 Plan of a Constitution for the Inhabitants of the Indian Coast, in Central America, commonly called the Mosquito Shore.

Rare pamphlet outlining the constitution of the ​‘Commonwealth of Indialand’.

The present work was the last throw of the dice for Gregor MacGregor’s fraudulent Poyaisian Scheme. MacGregor (1786–1845) began his life as a military adventurer in Venezuela and Colombia, during their wars of independence. In 1820 he visited what is today Honduras and obtained a grant of eight million acres from George Frederick Augustus, king of the Mosquito Indians. Returning to London, Macgregor styled himself as Gregor I, prince of the independent state of Poyais. He set about publicising his fictitious state, setting up a land office in London and selling bonds to investors. The scheme began to unravel when, echoing the Darien scheme of the late seventeenth century, a group of around two hundred settlers, mostly Scots, sailed to Poyais. Discovering only a barren and inhospitable swampland, they were saved by a British rescue mission. MacGregor fled to Paris in late 1823 only to continue his activities there. After acquittal in a French fraud trial he returned to London in 1827 and once again began issuing bonds for a watered down version of his Poyaisian Scheme. By 1834 MacGregor was back in Scotland and living in Edinburgh. He paid some unredeemed securities by issuing yet another series of Poyaisian land certificates. Two years later he published a constitution — the present work — for a smaller Poyaisian republic, centred on the region surrounding the Black River, and headed by himself as President. It was clear, however, that ​“Poyais had had its day” (Sinclair). An attempt by MacGregor to sell some land certificates in 1837 marks the last record of any Poyais scheme. Following the death of his wife in 1838, Macgregor returned to Venezuela, where he was given an army pension, and lived out the rest of his life as a respected member of the Caracas community.

The 35 page pamphlet sets-out in detail the composition of the Indialand state, it begins:

​“Whereas the aspects of human affairs throughout the world, renders it desirable, that there should be a place of asylum for all those persons who feel, or who believe, that their civil condition and prospects in life would be improved by emigration, or change of country: Whereas, a territory to be fit for such a purpose must possess the following requisites — complete independence of any foreign power, or nation remote or conterminous; ample scope or extent of land for cultivation; and. on the part of the settlers, the unfettered enjoyment of their rights and of legislation in common with the native inhabitants: And whereas the Indian lands in Central America possess all these advantages, it seems that this is that part of the globe which is the best adapted of all, for the foundation of a great and free Indian State”.

The work goes on to outline a declaration of rights, the form of government, judicial system, cantons, townships and municipalities, sheriffs, the militia, and other general regulations.