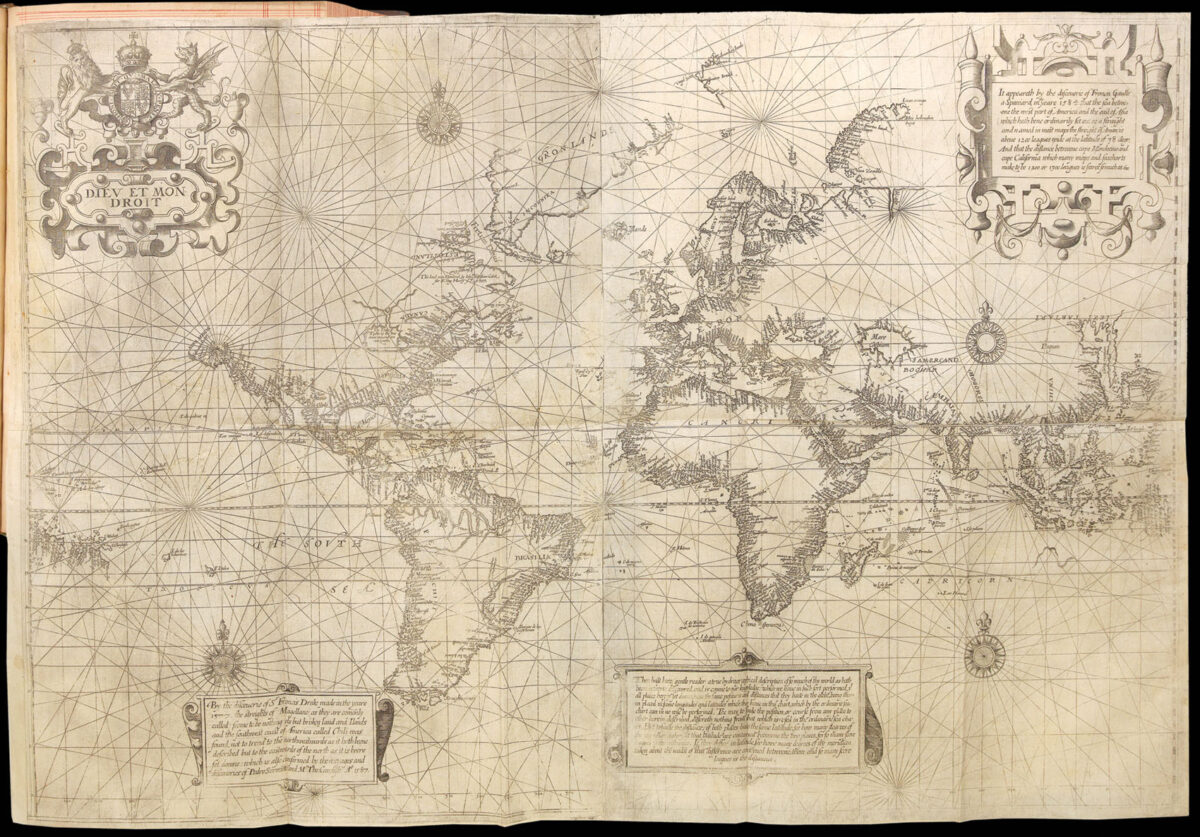 “the great prose epic of the Elizabethan period” with both the Wright-Molyneux world map and the rare suppressed ​‘Voyage to Cadiz’ from the library of the Earls of Macclesfield.

The Principall Navigations, Voyages, Traffiques and Discoveries of the English Nation Made by Sea or Over-Land, to the Remote and Farthest Distant Quarters of the Earth…

The Wright-Molyneux Map is the first English map on Mercator’s projection, it is the first map to name Lake Ontario, and one of the first maps to use the name ​“Virginia”. Richard Hakluyt’s ​‘Principall Navigations’ is first collection of English voyages, published at the height of Elizabethan maritime prestige and ​“the great prose epic of the Elizabethan period”.

The Wright-Molyneux Map
Gerard Mercator (1512–1594) revolutionized cartography with his development of an isogonic cylindrical projection that mapped a sphere on to a flat plane. Mercator expected that his projection would be a valuable tool for navigators but he neglected to provide practical guidelines on how use it. Edward Wright (1558?-1615), a professor of mathematics at Cambridge University, modified Mercator’s system and published his results, ​‘The Correction of Certain Errors in Navigation’, in 1599 and again in an improved edition entitled ​‘Certaine errors in navigation, detected and corrected’ (London, 1610). Wright’s book contained new mathematical tables and instructions on plotting straight-line courses on maps based on the Mercator projection. The system developed by Wright contributed to the supremacy of the British Navy and is still in use today.

Wright published ​‘A Chart of the World on Mercator’s Projection’ in 1599 based on his projection of a globe engraved by the English globe maker Emeric Molyneux in 1592. It was the first map to use Wright’s improvements on Mercator’s projection. It quickly became famous, even catching Shakespeare’s attention: in ​“Twelfth Night”, first performed in 1602, Maria says of Malvolio: ​“He does smile his face into more lines than is in the new map with the augmentation of the Indies” (Act III, Scene II).

Unlike many maps and charts of the era that represented the often fantastic speculations of their makers, Wright’s ​‘Chart of the World’ offers a minimum of detail and even leaves areas blank wherever geographic information was lacking. These undefined areas are especially evident along Wright’s coastlines. For example, the coast of California above Cape Mendocino is blank.

Wright’s world map depicts a wider Pacific Ocean than other maps of its time. On the American continent, Wright labels upper California ​‘Nova Albion’; other maps designated this area ​‘Anian’ but Wright adopted the name given the region by Sir Francis Drake. ​‘Quivira’ still appears on the West coast. Further to the east, the map also shows a ​‘Lake of Tadouac’ reminiscent of the Sea of Verrazano. This lake is connected to the Atlantic Ocean by a river that appears to run south of the St. Lawrence River. It is also connected to a large body of water to the north. Lake Tadouac is apparently an early reference to either the Hudson Bay or to the Great Lakes, neither of which were ​“discovered” by Europeans until eleven or twelve years after Wright’s map was published. Wright’s map is also one of the earliest maps to use the name ​“Virginia”.

The present example is in the second state, also from 1599, with the cartouche with engraved text describing Drake’s discoveries in the Americas added to the lower left of the map.

Top left are the arms of Elizabeth I; top right a strapwork cartouche with a text about Francis Gaulle’s discoveries in the Pacific; and bottom centre another cartouche with a general description of the chart.

Comprising 243 narratives of voyages and travels in the New World in some 1,700,000 words, ​‘The Principall Navigations’ is the greatest assemblage of travel accounts and navigations to all parts of the world collected up to its time, and a vital source for early New World exploration. ​“It is difficult to over rate the importance and value of this extraordinary collection of voyages” (Sabin).

This second edition of Hakluyt’s voyages is, in fact, an entirely different book from the initial 1589 compilation and was greatly expanded from the single-volume original. Boies Penrose considered that ​“the first edition of the Principal Navigations transcended anything that had gone before, though it, in turn, was surpassed by the second edition”. Indeed, Hakluyt devoted his life to the work and ​“throughout the 1590s, therefore, this indefatigable editor set himself to the formidable task of expanding the collection and bringing it up to date … this was indeed Hakluyt’s monumental masterpiece, and the great prose epic of the Elizabethan period … Much that was new and important was included: the travels of Newbery and Fitch, Lancaster’s first voyage, the new achievements in the Spanish Main, and particularly Raleigh’s tropical adventures …The book must always remain a great work of history, and a great sourcebook of geography, while the accounts themselves constitute a body of narrative literature which is of the highest value in understanding the spirit and the tendencies of the Tudor age” (Penrose).

Here the first volume contains the original printing of the rare ​‘Voyage to Cadiz’, which was suppressed by order of Queen Elizabeth after Robert Devereux, the Earl of Essex, incurred her wrath by returning to England from Ireland without leave in 1599 to marry Sir Philip Sidney’s widow, the daughter of Sir Francis Walsingham. The original title page, dated 1598, mentioning the ​“famous victorie atchieued at the citie of Cadiz” is here replaced for the 1599 printing with these words removed. As the account of the sacking of Cadiz was contained within the last leaves of the first volume (pp. 607–619), these leaves were often removed. In the present example the leaves have been re-inserted in their rightful place.

Edward Wright’s world map was, according to Quinn’s 1974 census for ​‘The Hakluyt Handbook’, only to be found in 19, of the 240, predominantly institutional, examples of the book surveyed. Quinn notes that this survival rate is, even allowing for the high mortality levels traditionally attached to decorative world maps in books, ​“sufficiently low to raise the possibility that not all copies were equipped with the map, either because it was made available after many sets had been sold, which would mean that its date might be later than 1599, or because it was an optional extra supplied at additional cost”. We have been unable to trace any example of the work with Wright’s map selling in the trade in the past 100 years. Indeed, Quinn’s survey included all major booksellers’ catalogues and public auctions in the English speaking world.

Nineteenth-century North Library bookplate of the Earls of Macclesfield, Shirburn Castle, Oxfordshire, on the front paste-down. 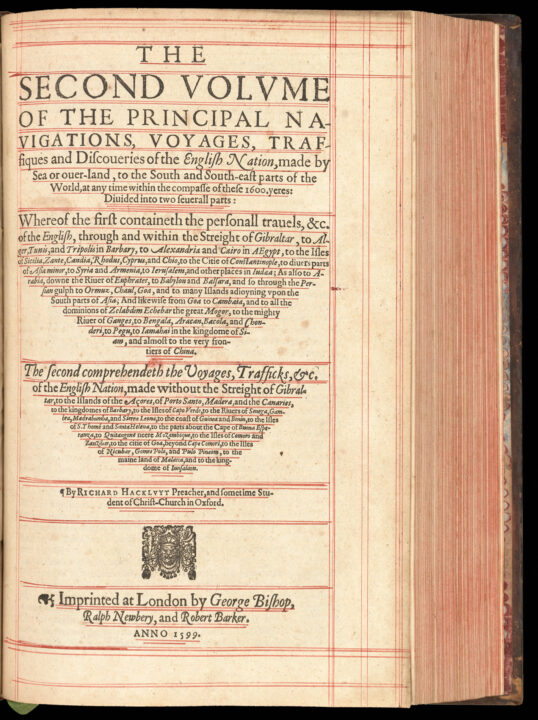 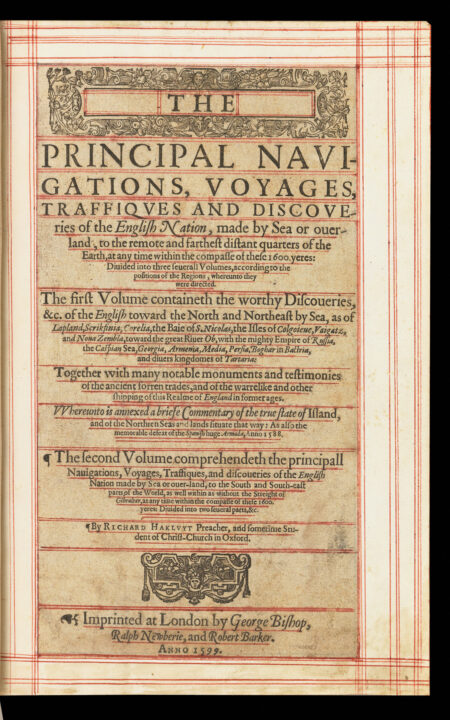 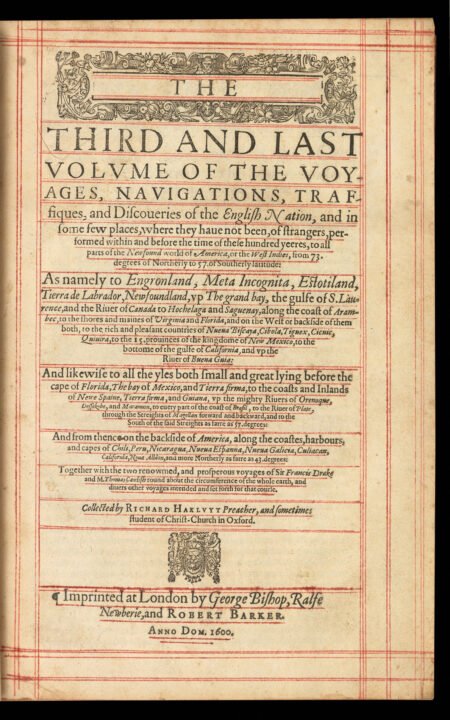 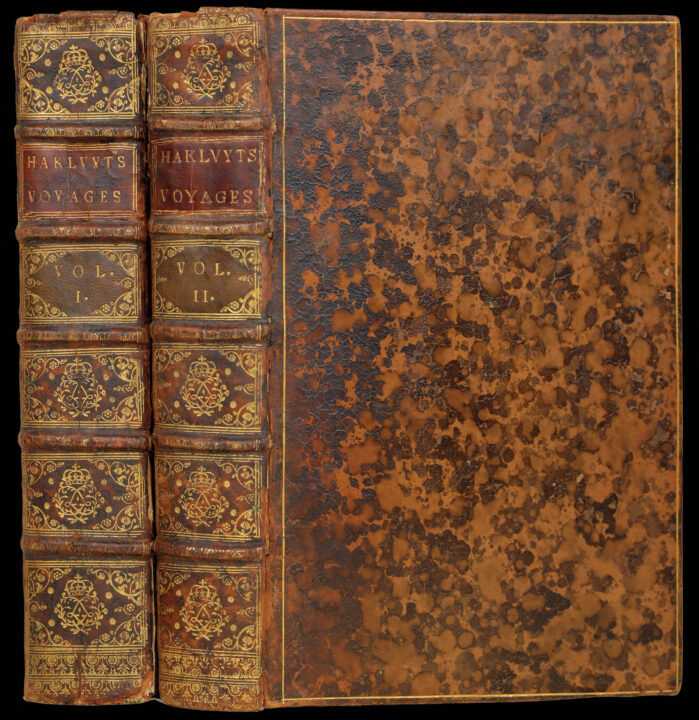