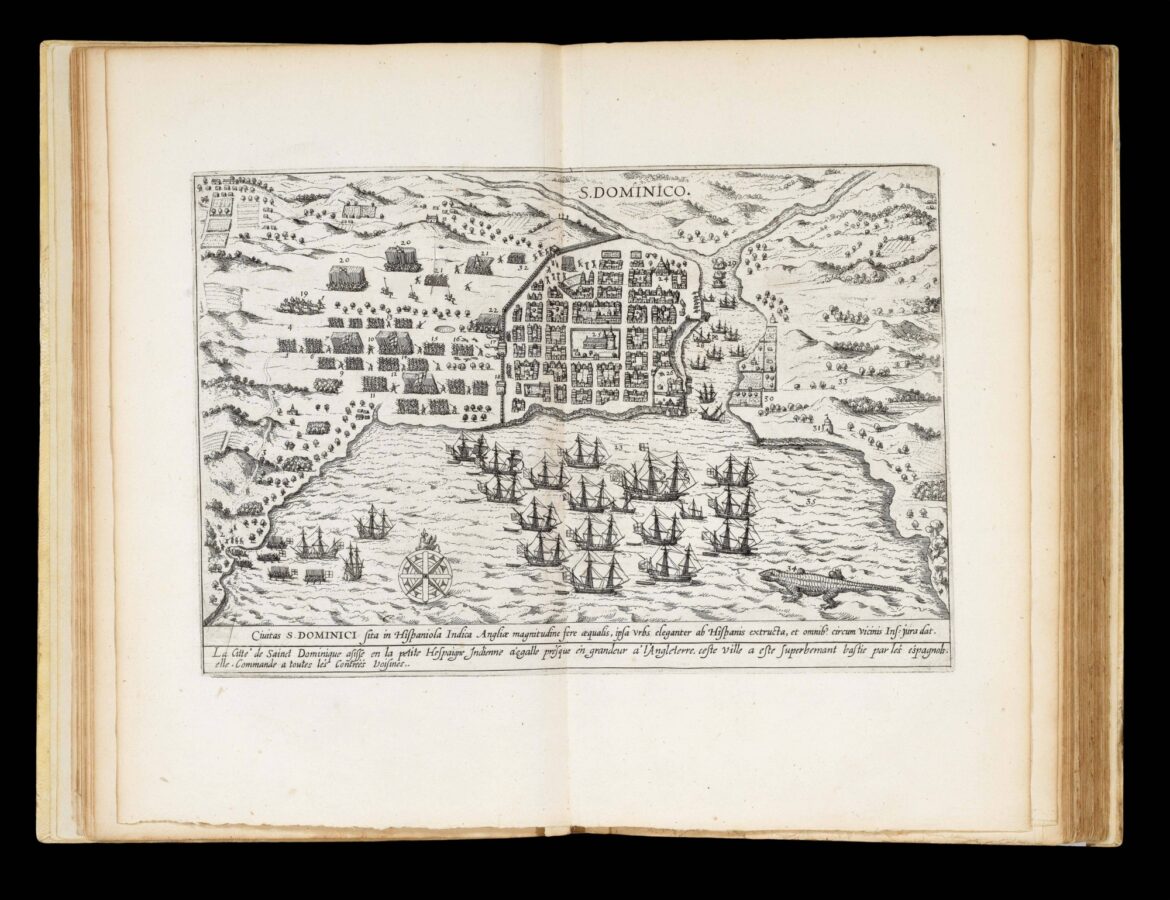 The importance of this French edition of Herrera’s ​‘Description des Indes Occidentales’, and the other 1622 editions in Latin and Dutch, lies in its engraved pictorial title page with the first map to delineate California as an Island and in the inclusion of the first comprehensive account of Jacob Le Maire’s voyage. The 14 maps in the Herrera’s section are almost identical to those in the original 1601 ​‘Descripcion’, save for some resizing and changes in a few details. The most interesting are probably the ​‘Description de las Yndias Occidentalis’, which depicts the Papal line of demarcation dividing the world between Spain and Portugal, and the ​‘Description de las Indias del Poniente’, which depicts a large part of the Pacific with the Moluccas, the Philippines and the Ladrones accurately positioned.

Le Maire and Cornelis Schouten, his second in command, left Texel in June 1615 on a mission to find a new route to reach the Spices Islands which would break the trade monopoly of the Dutch East India Company (which had been grant a monopoly trade through the Strait of Magellan). The pair succeeded to break the monopoly by rounding south America south of the Straits of Magellan. The new cape was name Horn (or Hoorn) after Shouten’s ship which had been lost due to fire at the Patagonian port Desire. In doing so they also dispelled the myth of a great southern continent joined to South America.

They would continue to sail across the Pacific, discovering numerous islands along the way, and sailing up the northern coast of New Guinea. By September 1616 Le Maire reached Ternate in the Moluccas, the headquarters of the Dutch East India Company. Initially well received, they were soon accused of having encroached on the rights of the Company and were tried, found guilty and shipped home on Spilbergen’s ship which was completing its own trip around the world. Le Maire died on the return voyage and his journals were taken by the Company. Schouten and Spibergen published an abreviated version of these journal; and it was not until 1622, after a long trial, that Isaac Le Maire was able to regain custody of his son’s journals and to publish them in full.

The four additional city views (Santo Domingo in the Dominican Republic; Santiago in the Cape Verde Islands; Cartagena in Columbia; and San Augustine, Florida) were drawn, and possibly engraved, by the Italian artist Baptista Boazio.

The Boazio views are ​“probably the most interesting and important published graphic work pertaining to Drake and his career” – Kraus. They are also the first representations of those four cities. Indeed, the view of St Augustine is the first known engraving of any locality in the present-day United States. Their history is uncertain. There is no indication that Boazio participated to the voyage but he must have obtained a version of these views from someone who did:

​“It was undoubtedly in the course of the return voyage that the author of this view-plan [of St. Augustine] was able to copy the figure of the Dorado fish [and of the other creatures decorating the plans] from John White’s original drawings” – Kraus. John White was the Governor of the first English settlement in America, who along with the other surviving settlers returned to England from Roanoke Island with Drake’s expedition.

Two issues of these views were printed in Leiden in 1588, both extremely rare: a large paper issue (16.5 by 22 inches) was printed to illustrate Walter Bigges and Master Croftes, ​‘A Summarie and true discourse of Sir Francis Drake’s West Indian Voyage’ published in London in 1589; the present smaller size (7.5 by 11.25 inches) has captions in Latin and French and a numerical instead of alphabetical key, and was probably printed to illustrate the Latin and French translations of ​‘A Summarie and true discourse’, published in Leiden in 1588. While the pictures are broadly similar, the present examples show greater detail, whilst the larger ones include more sea monsters and other embellishments.

Priority regarding date of publication between those two issues has not been established with certainty but there are indications that the smaller issue came first:
​“A close comparison of details, however, suggests that the smaller engravings come from an earlier set of drawings and that the larger maps represent revisions as well as embellishments, probably done by the same artist” (Mary Frear Keeler).
There were two subsequent issues of the smaller Boazio plates: the first in 1589, published in Cologne, used the same plates but with only the Latin text below; the plates themselves are set within the text, with printed text to the verso; the second, 1590, Nuremberg printing was neither printed from new plates or the plates have been heavily revised.

Only two complete sets of the four large views have appeared at auction in the last fifty years, each accompanied by an example of a map of Drake’s Atlantic voyage: the DuPont sale at Christie s in 1991 for $231,000; and bound into the Macclesfield example of Saxton’s atlas, Sotheby’s, 2007, for £669,600. A large coloured view of Cartagena was sold at Christies in 1996 for $16,100.
There is no record of any copy of the 1588 smaller size issue having gone through auction. In 1970, Kraus, p.156, estimated that they were eight recorded complete sets of the large Boazio plates and seven complete sets of the smaller plates (1588 and 1589).
OCLC records eight complete sets of the large plates, but only two complete sets of the small 1588 plates: New York Public Library, and the Huntington Library. There is an incomplete set (lacking San Augustine) of the smaller 1588 plates in the Kraus’ Sir Francis Drake Collection housed in the Library of Congress. Of the 1589 small plates we were able to trace nine complete examples.
A comparison of the Boazio maps in the present book with the plates in the Huntington Library, New York Public Library, and the Library of Congress confirm that the 4 sets are identical. 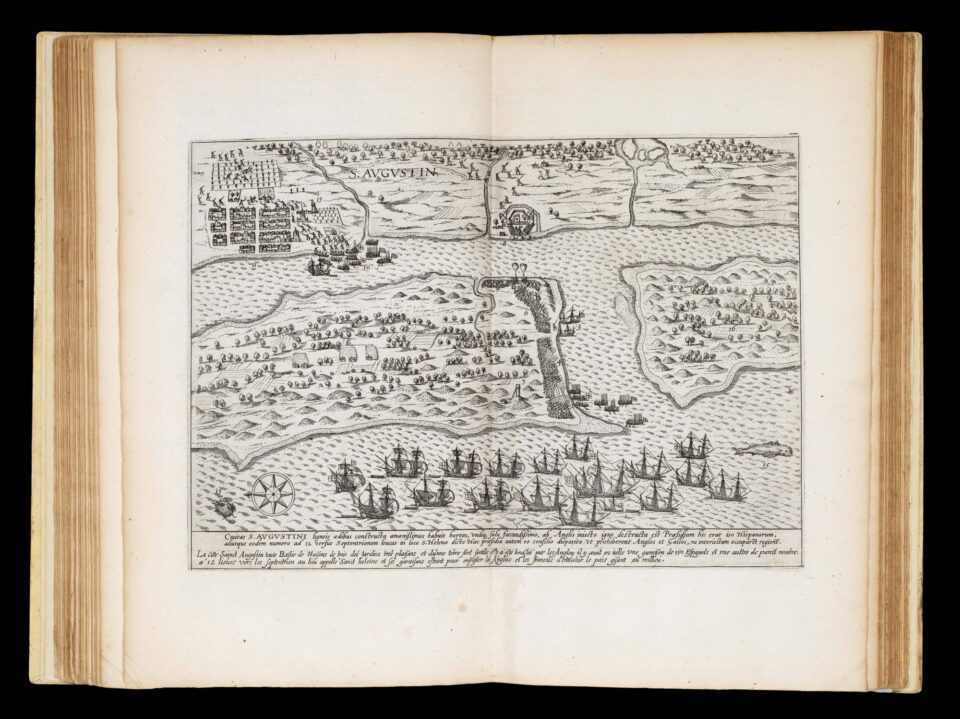 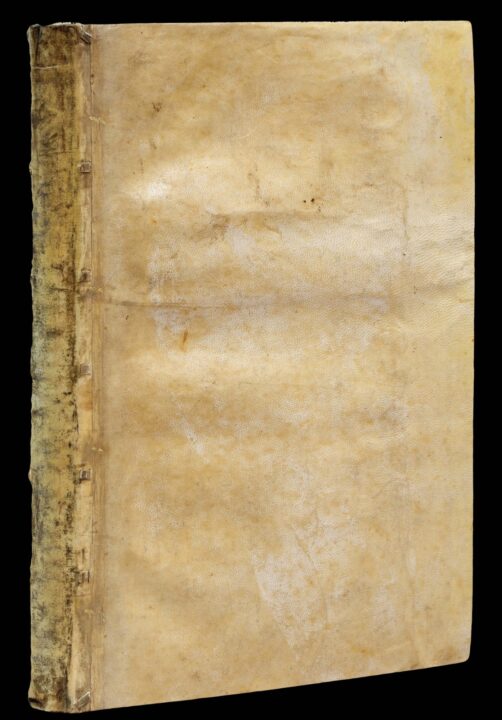 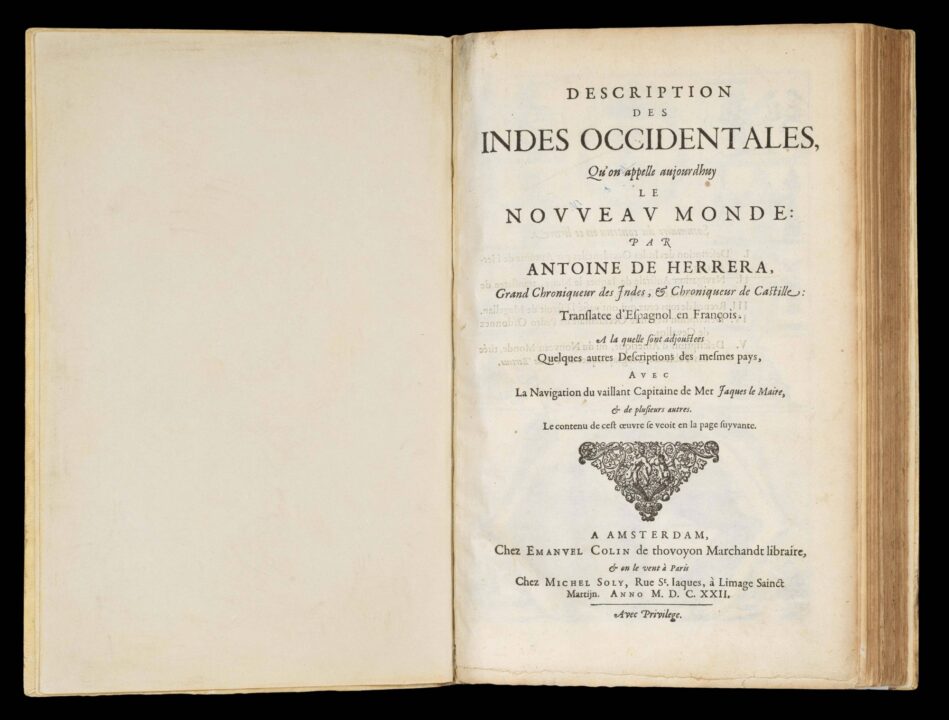 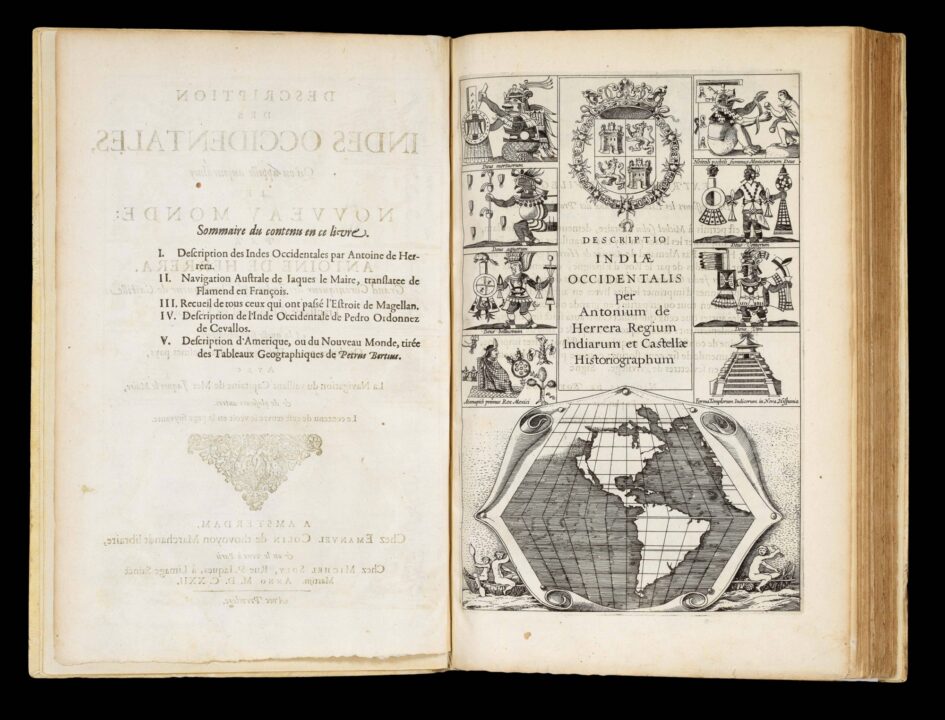 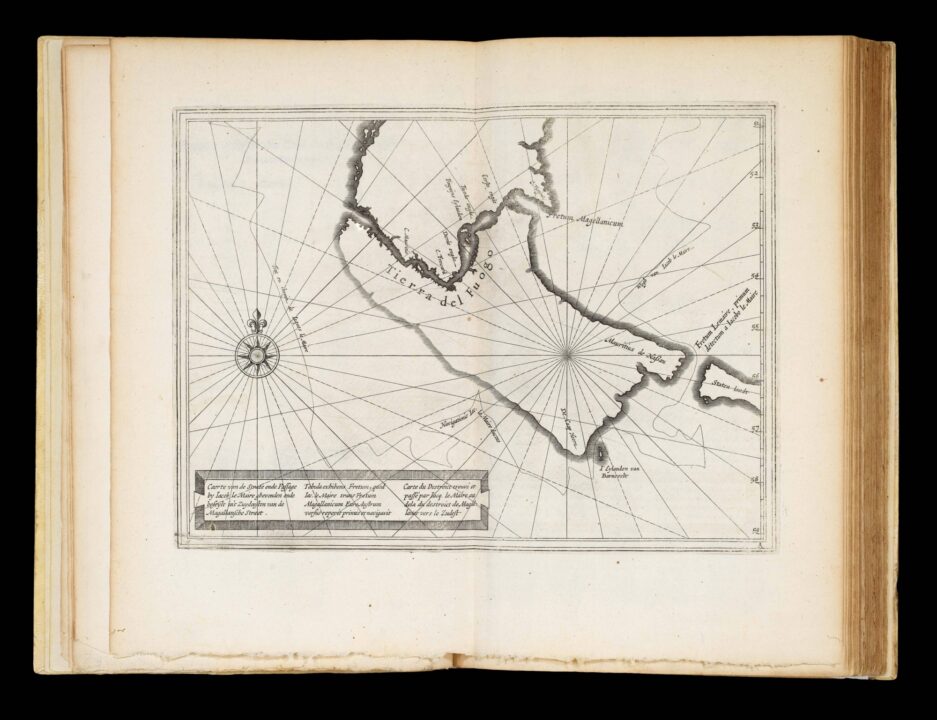 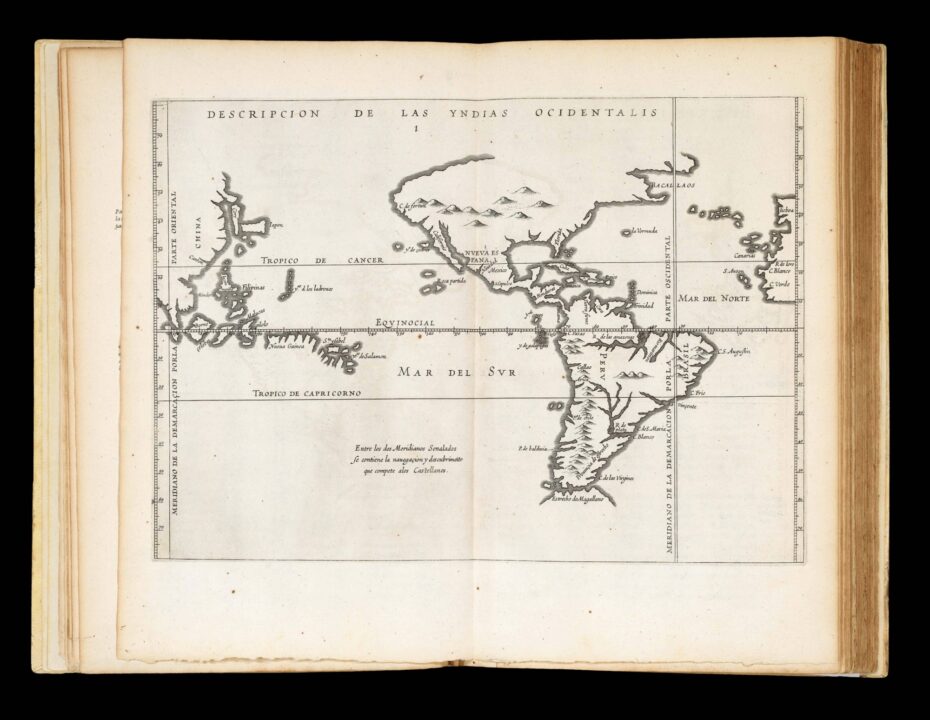 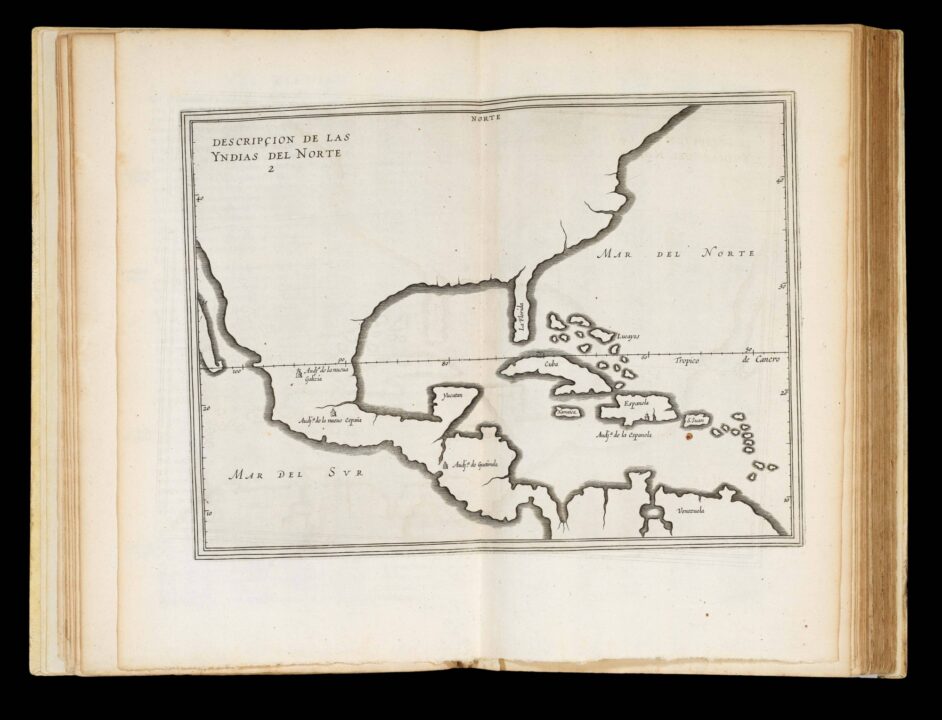 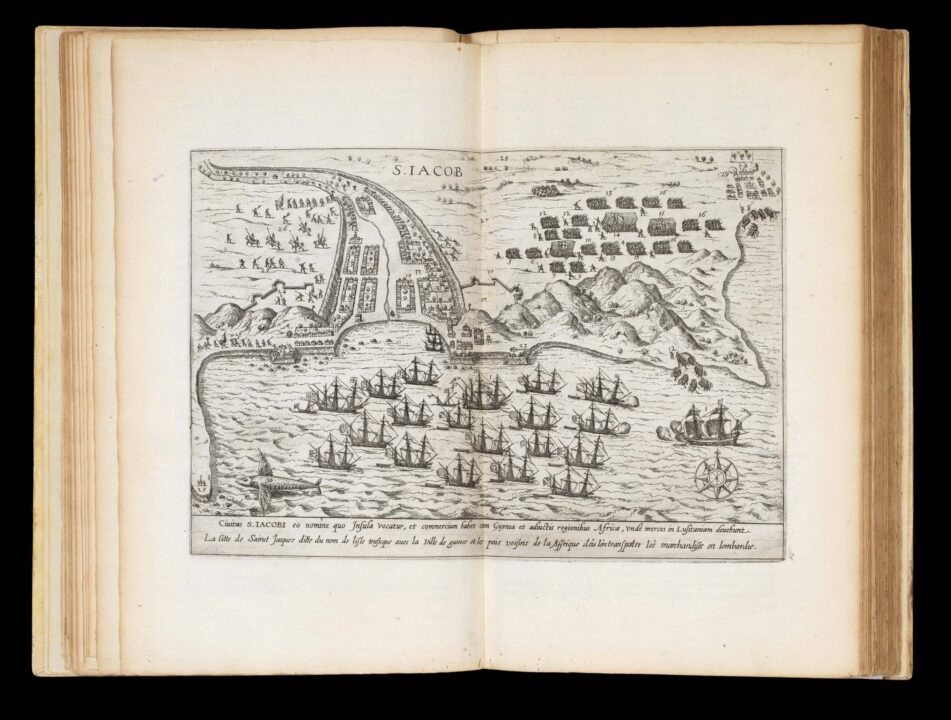 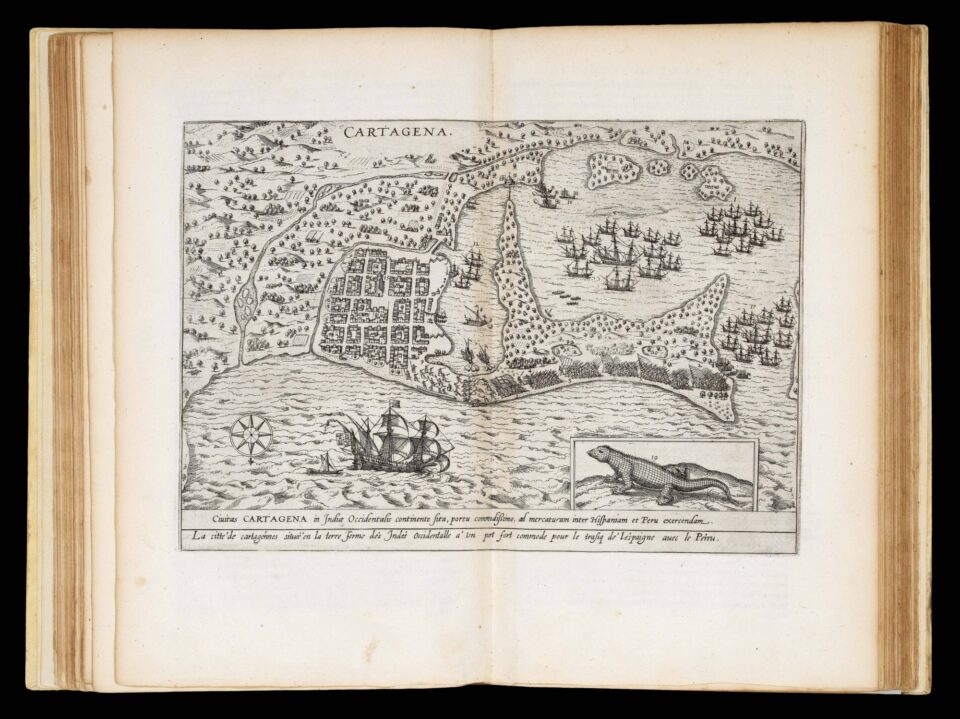